See inside the underground bunker that could launch a nuclear war

MINOT, N.D. — During the Cold War, the United States developed a vast nuclear arsenal with weapons on aircraft, submarines and land-based missiles. These three ways of delivering nuclear weapons became known as the triad, with the Soviet Union was the primary target. The strategy was to deter an attack on the United States by having enough nuclear weapons that could survive a strike and retaliate.

READ MORE: How many ballistic missile submarines does the U.S. really need?

Over the next three decades, the Pentagon plans to spend $1 trillion to rebuild the triad. Military commanders and civilian experts say nuclear weapons are used every day to deter a nuclear attack against the U.S. and that the current stockpile needs to be replaced because they are old. An example: the B-52H bombers began flying in the late 1950s early 1960s and are older than the crews that fly them.

Panorama of a B-52H bomber inside a hangar at Minot Air Force Base, N.D. Inert training bombs sit on carts, at right, ready to be loaded onto the aircraft. These planes, first fielded in 1955, each can carry up to 70,000 lbs. of munitions. Photo by Dan Sagalyn

But critics say the Defense Department is duplicating what it had during the cold war. Two leading critics, former defense secretary William Perry and former top nuclear commander Gen. James Cartwright (Ret.), say one leg of the triad — land-based nuclear tipped missiles — should be phased out. 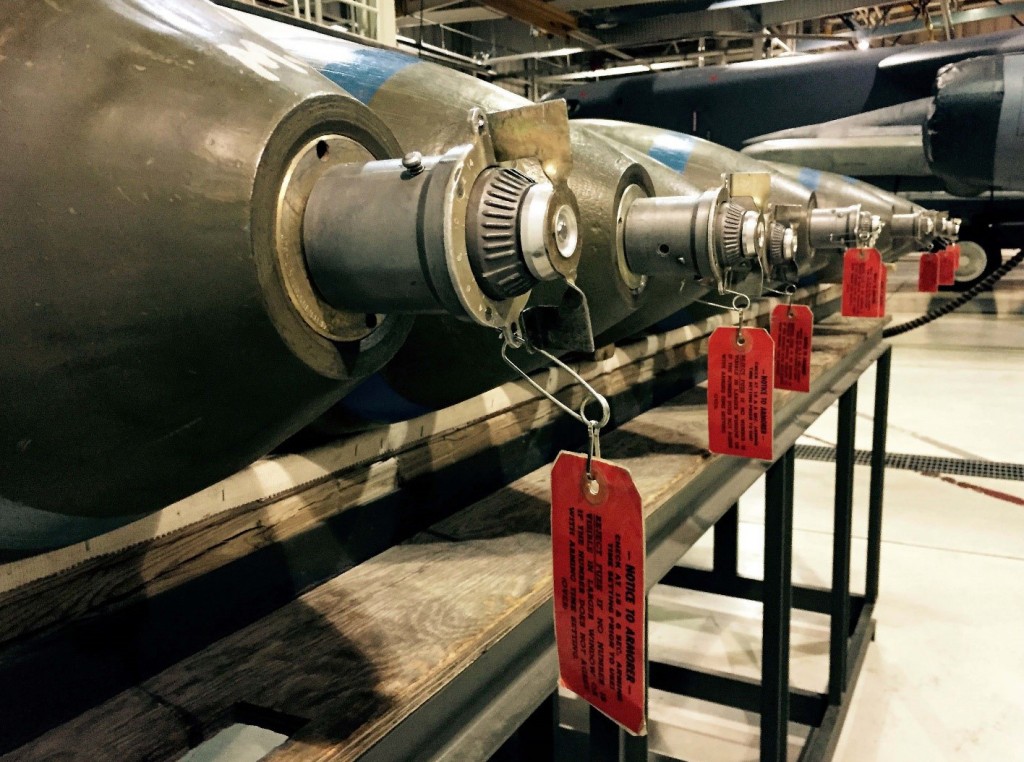 These dummy bombs — used for practice mounting airplanes’ payload — lie on a platform inside an aircraft hangar, ready to be loaded into B-52H aircraft for training missions at Minot Air Force Base, N.D. Photo by Dan Sagalyn 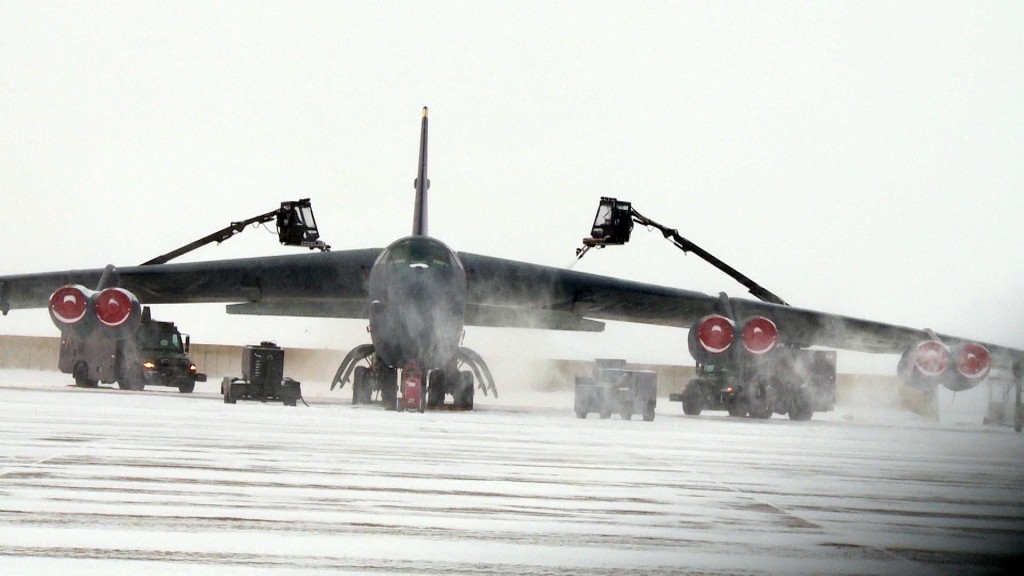 B-52H bomber on the tarmac at Minot Air Force base is sprayed down with de-icing fluid. Photo by Jamie McIntyre 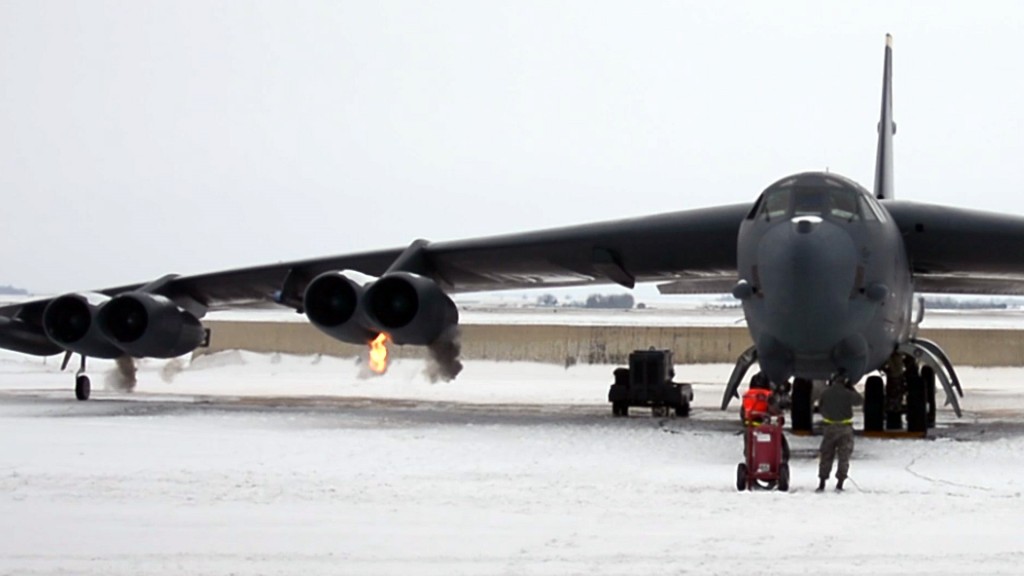 Flames and smoke burst from a B-52H’s aging jet engines, as they roar to life with the help of eight explosive charges. The method was developed during the Cold War to give the bomber a quick kick-start in a crisis. Photo by Jamie McIntyre 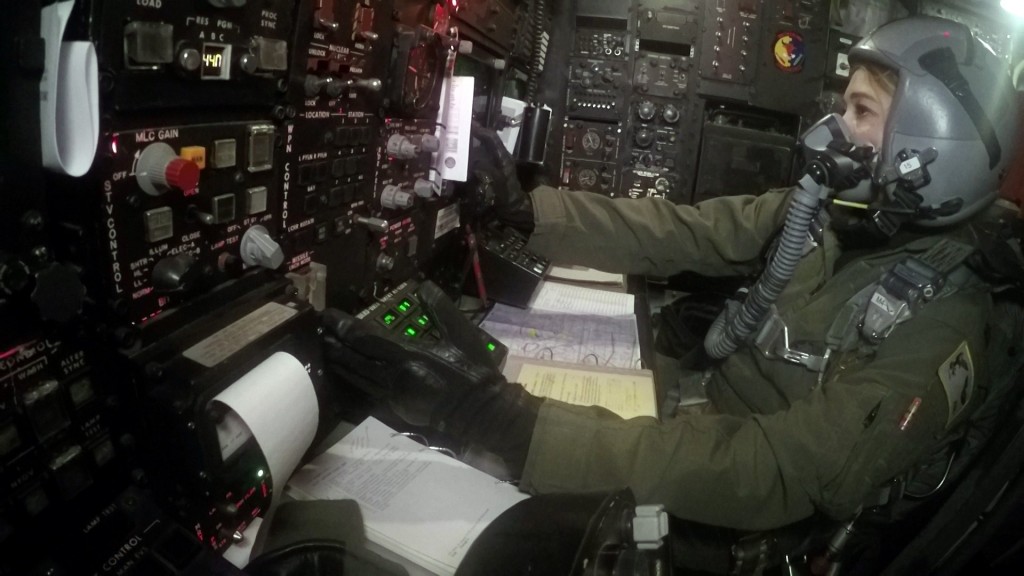 Air Force Capt. Margaret Ingerslew at the weapons controls of a B-52H bomber. This giant aircraft carries tons of munitions and fuel, but space for the crew is quite cramped. Photo by Dan Sagalyn 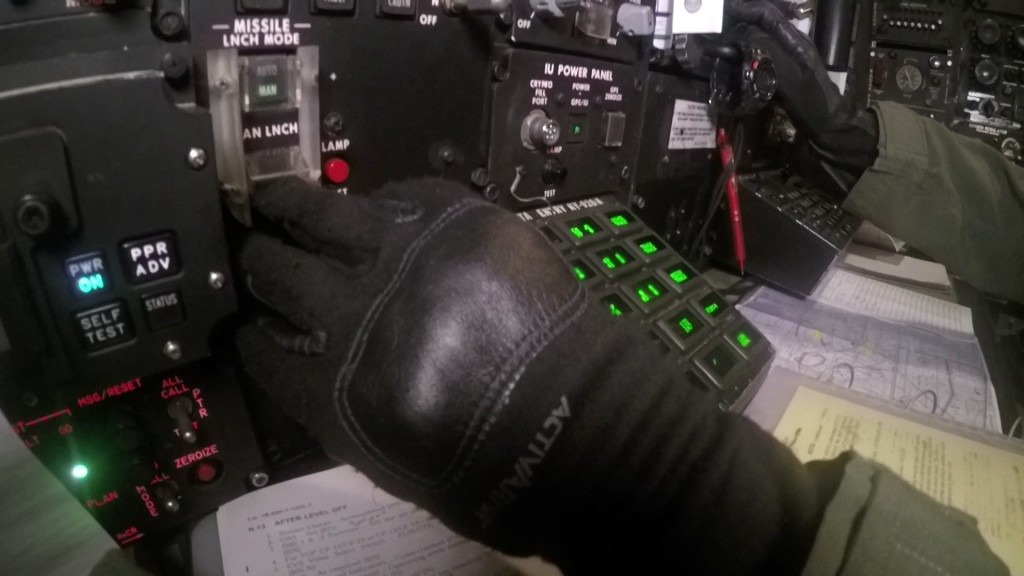 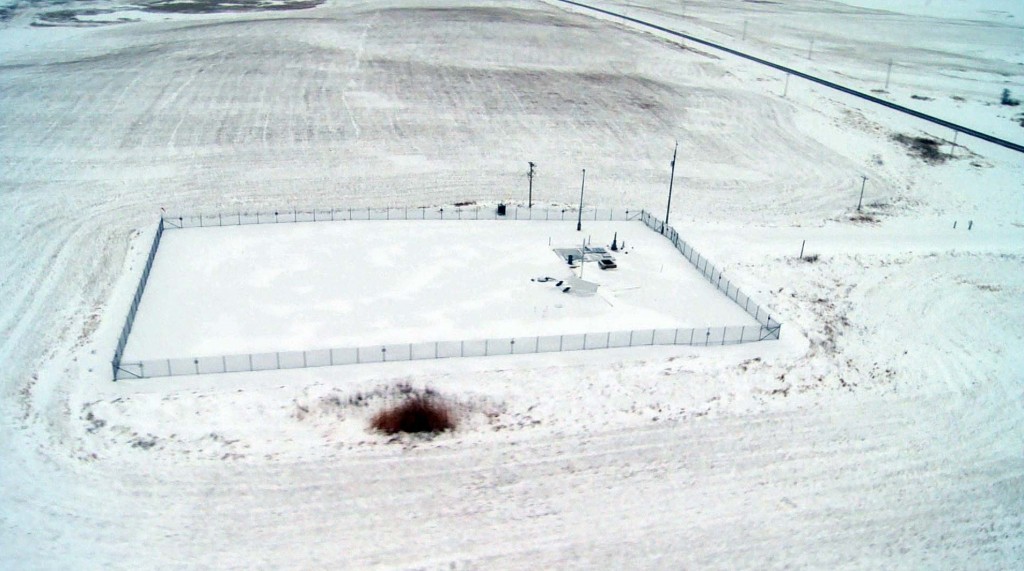 Nestled amid private farmland, a chain-link fence marks the perimeter around a Minuteman III ballistic-missile launch facility, buried underground in the vicinity of Minot Air Force Base, N.D. The United States fields roughly 450 of the missiles, each fitted with a single nuclear warhead, spread across Minot and two other missile fields in Montana, Nebraska, Colorado and Wyoming. Photo by Jay Olivier 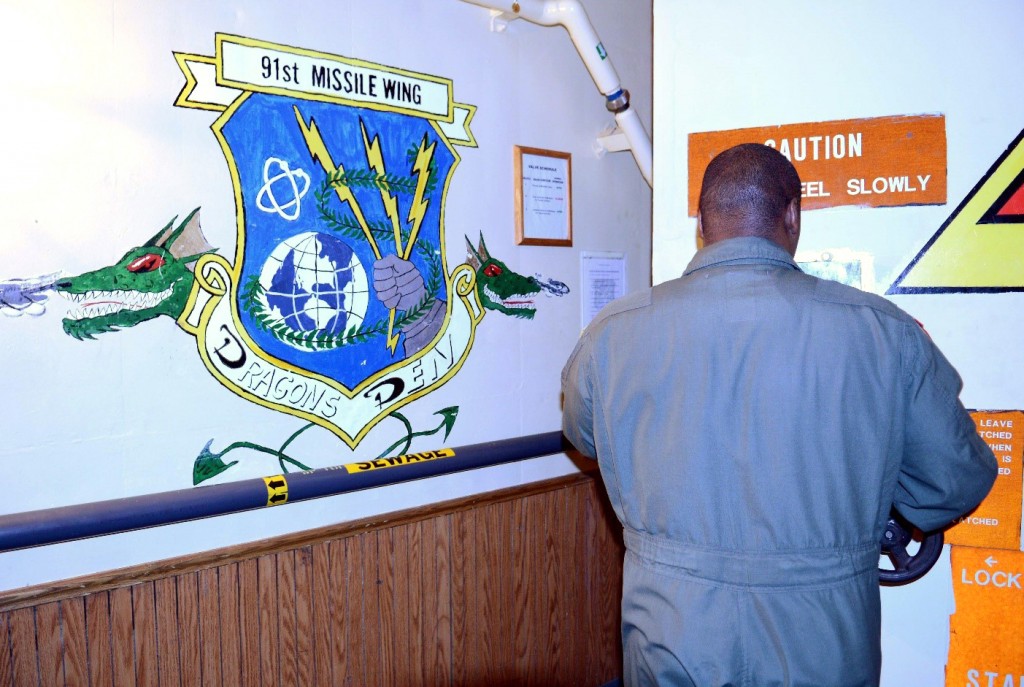 An eight-ton door must be opened to gain access to the missile-launch facility’s underground control capsule, which is buried 50 to 60 feet below the surface. Photo by Dan Sagalyn 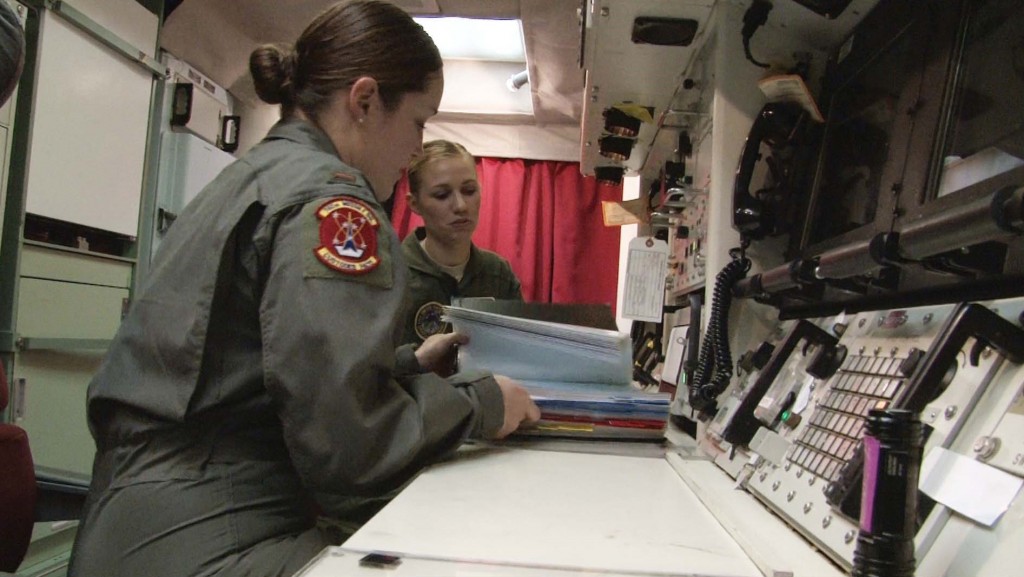 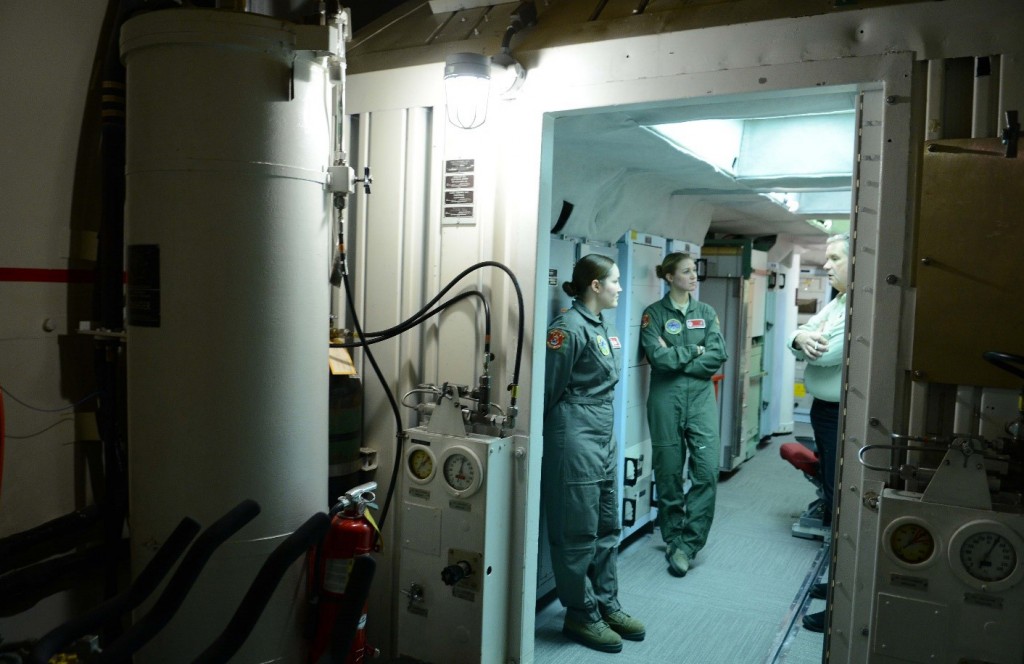 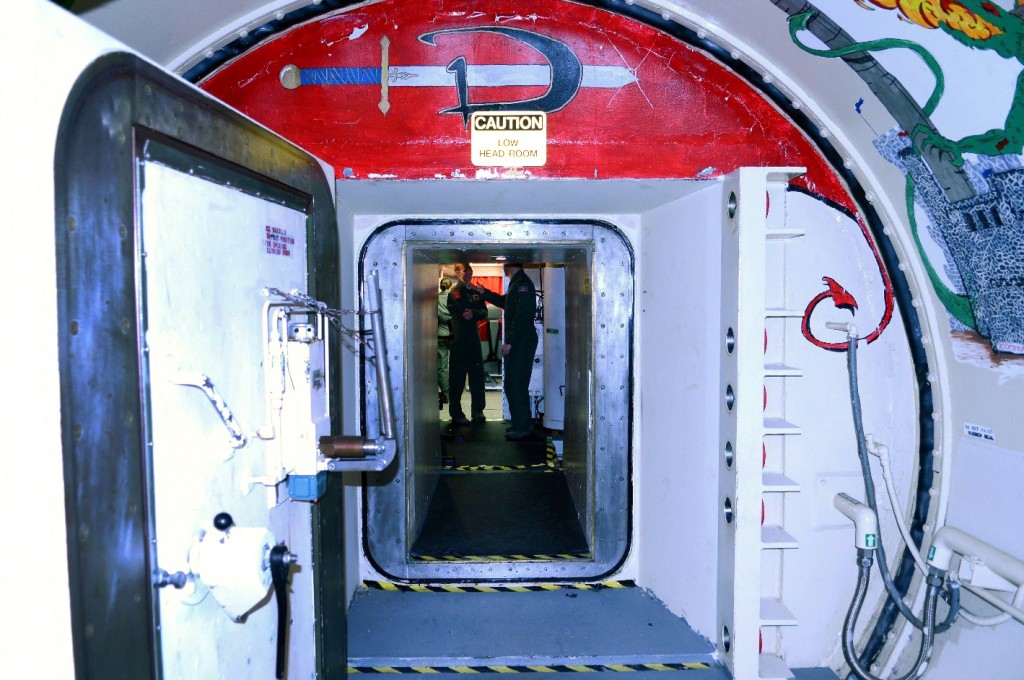 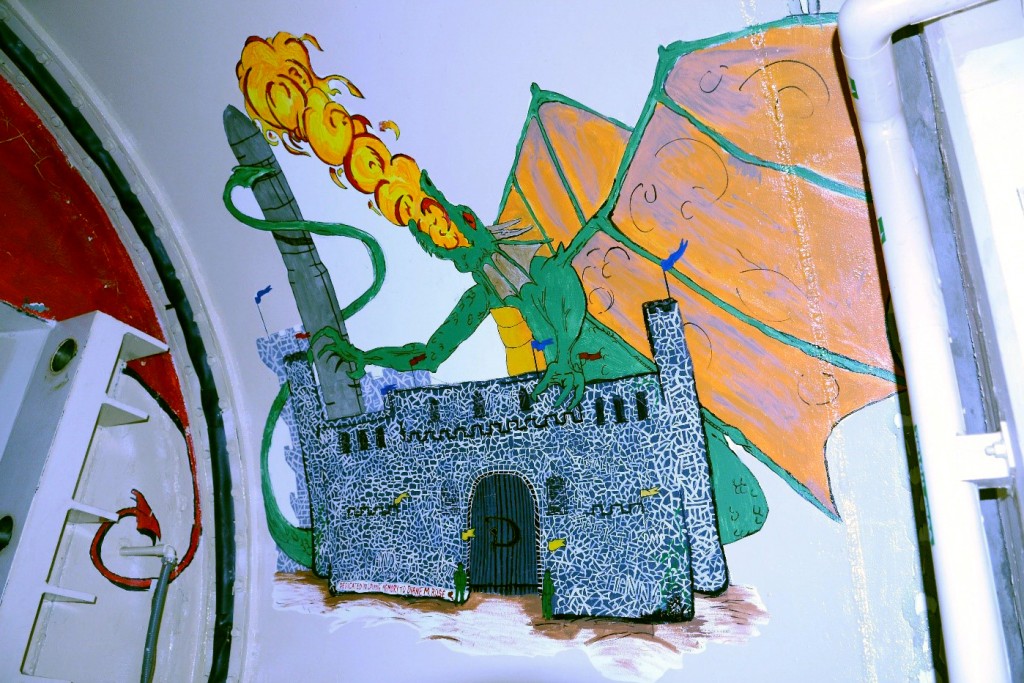 A fire-breathing dragon, fortress and ballistic missile are painted on the entranceway to an underground Minuteman III launch-control capsule, buried deep underground near Minot Air Force Base, N.D. Photo by Dan Sagalyn

Watch the full PBS NewsHour report with special correspondent Jamie McIntyre Wednesday night. This story was produced in partnership with the Pulitzer Center on Crisis Reporting.

Left: A missile launch-control facility near Minot Air Force Base. Day to day, each such facility is responsible for 10 Minuteman III missiles. But during an attack, a single facility could control up to 150 missiles if necessary, according to one former missileer. Minot's missile fields were built during the 1960s and cover roughly 8,500 square miles. The missiles and their control facilities are spread out to increase their chances of survival during a nuclear war. Photo by Jay Olivier