From nurses to social workers, see how public libraries are serving the homeless

Almost every morning at the Denver Public Library’s main branch, a group gathers on the fourth floor at the doors of the Community Technology Center, home to the library’s public access computers. Many of them are homeless or underemployed. But the DPL, like a lot of city libraries, is a safe haven during the day, especially during winter months. Public Libraries have long grappled with how to deal with and assist homeless patrons who bring a unique set of needs and challengers to librarians.

Courtney Young, President of the American Library Association, says that in times of economic hardship, more people turn to and depend on libraries and librarians for help.

“The last recession fueled library staff to take on many different roles including career counselor, teacher and technology instructor,” she told the NewsHour. “In communities where there is a greater need to assist the homeless, libraries are responding with services to better assist their patrons.”

Public Libraries have become more than just a makeshift day shelter for the homeless, they are actively reaching out to them to provide services. Below are some examples of what libraries across the nation are doing.

The staff of the Community Technology Center has the most interaction with homeless patrons according to Chris Henning, DPL’s communication manager. Twice a year CTC staff head out to an area women’s shelter to show residents how they can use a computer to search for a job and to sign them up for a library card.

Librarian Melanie Colletti provides guidance on anything from writing a resume to signing on to Facebook. She is also a member of DPL’s Homeless Services Action Committee, formed to explore ways the library can improve customer service to those experiencing homelessness and to educate library staff about the unique issues they face.

The Denver Public Library sought advice from the San Francisco Public Library, the first system in the nation to hire a full time social worker. Leah Esguerra was hired in 2009. She talked to the NewsHour’s Cat Wise:

“One of the advantages of having been here for six years is I’ve become a familiar face at the library so people know me. And it’s interesting even on the streets they say ‘you’re the library lady or the social worker.”

One of the positive results of the San Francisco program is that 150 formerly homeless patrons have received permanent housing.

Twice a month here homeless patrons and staff members get together for “Coffee and Conversation.” 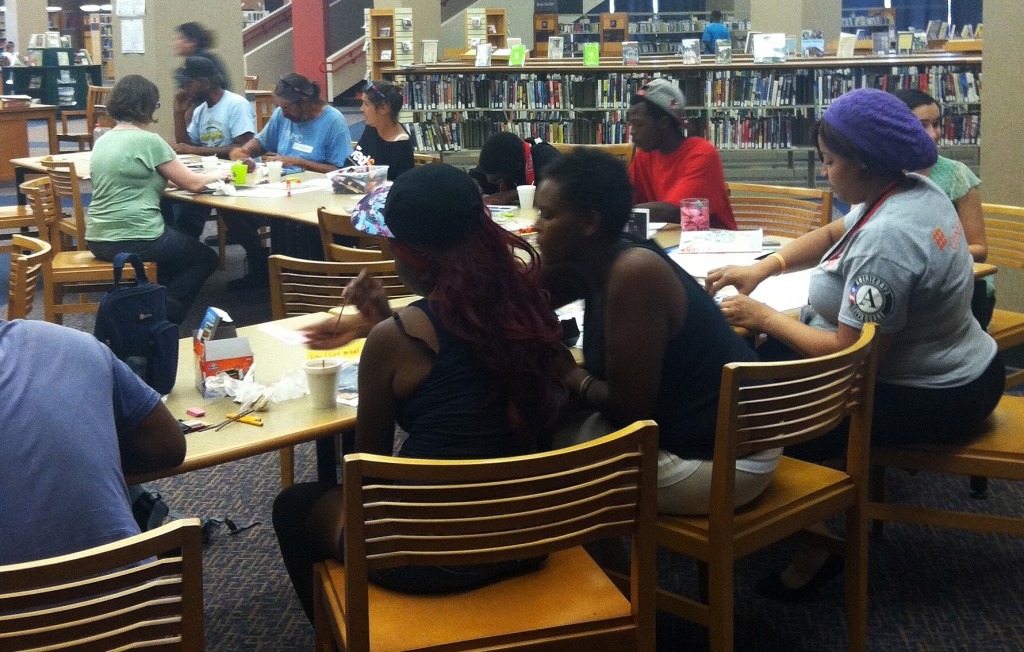 “Coffee and Conversation” started at the Dallas Public Library as a way to better understand and to help serve the homeless population in Dallas. Photo from Jasmine Africawala

The topics are set in advance and at other times informal. At a recent talk about HIV awareness, a member of the health community was on hand to answer questions. After the talk about 15 attendees got tested for the virus. Jasmine Africawala, the Community Engagement Administrator, facilitates the discussions. She said these conversations began as a way to give the library staff a better understanding for some of the regular homeless patrons who visit the library every day.

“We had no idea what any of their names were or their life stories or anything about them to really humanize them,” she said

The idea for Coffee and Conversation came from the Library’s Homeless Engagement Initiative. The first one was held in November 2013 and it’s the most popular program to come out of the initiative.

Africawala said that some people think the library caters too much to the homeless. She said that one of the major points that they are trying to convey is that the library “is a shared community” and that community means more than “just the people who look and act like you.”

Africawala said that Coffee and Conversation is the type of initiative that any library system could start with the staff they have on hand.

The library also sponsors Street View podcast, which is hosted by a homeless person. Guests often include social service providers.

Jean Badalamenti is also one of the first full time social workers employed by a public library.

Badalamenti is the Health and Human Services Coordinator for the Martin Luther King Jr. Library, the main branch here. She works with community and government agencies to provide much needed services such as food, housing and mental health counseling.

In 2012 the Pima County Public Library hired a public health nurse, the first of its kind in the nation. A stethoscope around his neck, Daniel Lopez, is easily spotted at the main branch. The other branches in the system are served by 16 to 20 nurses provide services either once a week or once a month. 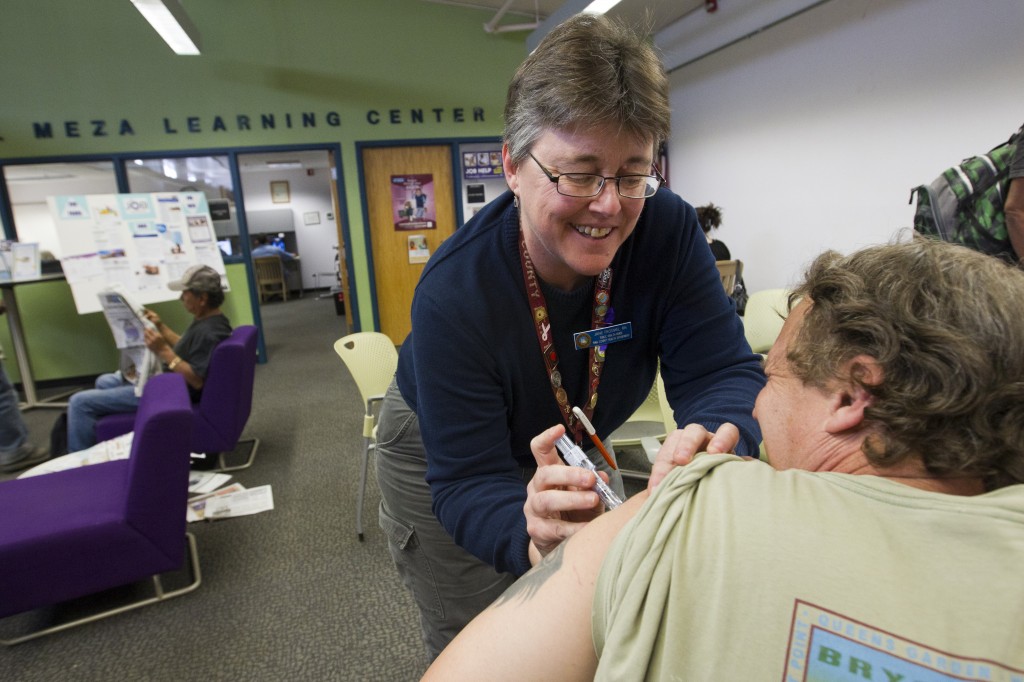 The collaboration between the health department and the library has been great in many ways, said Amber Mathewson, the deputy director for Strategic Initiatives.

“It’s really broadened how we worked between the library and the health department.” As a result, she said, “There will be even further collaboration down the road with Public Housing and that kind of thing.”

Pima County did look into hiring a social worker but ultimately decided a public health nurse was a better fit. One of the benefits of having a nurse said Mathewson is that the patron can receive basic first aid and can be referred to county clinics for follow up care. The library nurse has been able to identify patrons who may have been on the verge of a heart attack.

Nurse Lopez brings in another advantage — he is a trained marketplace navigator for the Affordable Care Act and a certified Medicaid Assistor for the state of Arizona. “He’s been integral in getting a lot of people back into insurance so they could actually get health care,” Mathewson said. “It’s been a really positive outcome for us.”

The nurses program has been a wonderful resource for both the patron and the staff, said Kenya Johnson, the library’s communications manager. 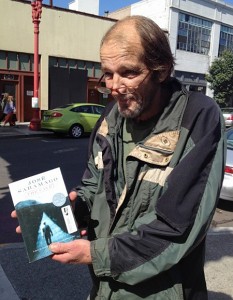 Ben Hodgson was a homeless veteran when Laura Moulton, the founder of Street Books, met him in Portland. Photo by Laura Moulton

A number of libraries, including those mentioned above, have protocols in place that enable homeless patrons to check out books. In Portland, Oregon, the homeless don’t need to step into a library to borrow books — “street librarians” deliver them by bike. Laura Moulton is the founder of Street Books, a non-profit organization that was created in 2011.

As in a traditional library, patrons living “outside,” as Moulton refers to the homeless population, check out books. The only difference is that there is no set return date. Moulton, who is also an adjunct professor, writer and artist, started Street Books because she believes in “the power of books to transport people from their current realities.”

There are three street librarians, including Moulton, who usually work one day a week for three-hour shifts. They pedal the “bikemobile,” a customized tricycle, to two or three spots where the homeless tend to congregate.

Street Books replenishes their book inventory with donations — many from The Multnomah County Library of Portland. Moulton’s dream is to expand to a second Bike.

[One of the board members of Street Books is Ben Hodgson, the “Inventory Specialist” Ms Moulton met him in 2011 when he was living ‘outside’]

Volunteer social workers are available twice a month in the San Jose Public Library for free 20-minute face-to-face consultations and referrals. Social Workers in the Library, or SWITL, began as a pilot program in October 2009. It is a partnership between the library, the National Association of Social Workers, and the schools of social work and library and information services at San Jose State University.

The Free Library of Philadelphia employees a full time social worker. The Central branch also houses the HOME Page Cafe whose employees were once homeless themselves

Tune in to Cat Wise’s report on the NewsHour tonight to learn more about how the San Francisco Public Library is addressing the needs of homeless patrons.