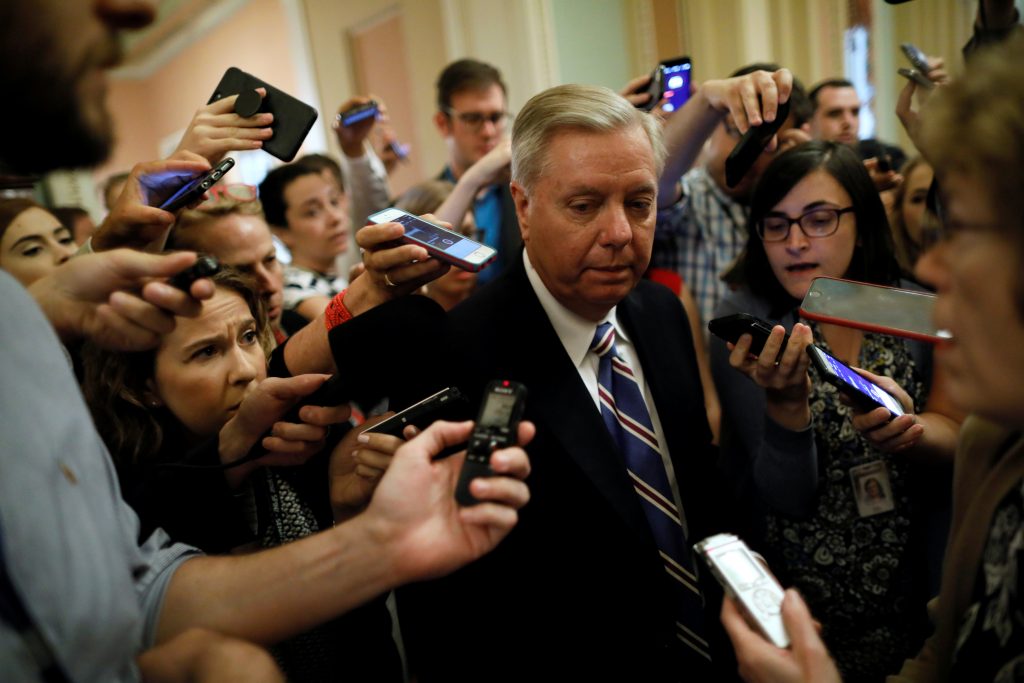 U.S. Senator Lindsey Graham, R-S.C., sponsoerd legislation Thursday that would suspend U.S. financial assistance to the Palestinian Authority until it ends what lawmakers said is a long-standing practice of rewarding Palestinians who kill Americans and Israelis. Photo by REUTERS/Jonathan Ernst.

WASHINGTON — A Senate committee approved legislation Thursday that would suspend U.S. financial assistance to the Palestinian Authority until it ends what lawmakers said is a long-standing practice of rewarding Palestinians who kill Americans and Israelis.

Corker said the Palestinian Authority has “enshrined in law” a system that creates a monetary incentive for acts of terrorism by paying monthly stipends of as much as $3,500 to Palestinians who commit acts of violence and to their families. The amount of the payment depends on the length of the jail sentence they receive for the crime, he said.

“This is sick,” Corker said.

Husam Zomlot, chief representative of the Palestinian General Delegation to the U.S., called the legislation “misinformed and counterproductive.” He disputed Corker’s assessment of what he described as a 52-year old program “to support families who lost their breadwinners to the atrocities of the occupation, the vast majority of whom are unduly arrested or killed by Israel.”

Palestinians have argued that ending Israel’s occupation of the West Bank, Gaza Strip and east Jerusalem — lands Palestinians seek for their state — is key to defeating terrorism.

“The program has served a social and security need to provide for our people, guarantee a better future for the children and protect the needy from the many radical groups around us,” Zomlot said in an emailed statement.

The bill is named for Taylor Force, an MBA student at Vanderbilt University in Tennessee and a West Point graduate who was visiting Israel in March 2016 when he was stabbed to death by a Palestinian. Force was from Lubbock, Texas. His parents live in South Carolina.

MORE: 50 years later, a reporter recalls the 6-Day War – and the Israeli-Palestinian tensions that remain

“So if you’re a young Palestinian the best thing maybe you can do for your family in terms of income streams is to be terrorist,” Graham said. “That’s inconsistent with peace.”

The Trump administration’s budget request for fiscal 2018 includes roughly $260 million for economic development and law enforcement programs in the West Bank and Gaza. The internationally backed Palestinian Authority has tightened its grip in the West Bank since losing control of the Gaza Strip to the Islamic militant group Hamas a decade ago.

“Assistance in the West Bank and Gaza remains critical to advancing the United States’ long-standing national security priority of achieving Israeli-Palestinian peace,” according to a State Department budget documents.

A December report by the nonpartisan Congressional Research Service said that since the mid-1990s the U.S. has committed more than $5 billion in economic and nonlethal security assistance to the Palestinians. The United States has, since 2015, cut foreign aid to the Palestinians by the same amount its government has spent on the payments for acts of terrorism.

But the legislation cleared by the committee would go a step further, a move that concerned several Democrats. They said they agreed with the intent of the bill, but feared withholding critically needed foreign aid would accelerate the problems in the West Bank and Gaza.

Before foreign aid can resume, the State Department would be required to certify to Congress that the Palestinian Authority has terminated the payments for acts of terrorism and has revoked any law or decree that allows a compensation system for imprisoned Palestinians, according to the bill.

The committee agreed to adjust the legislation so that the aid payments would go into an escrow account that could be accessed once the laws establishing the prisoner payments are revoked. Sen. Tim Kaine, D-Va., had argued the Palestinian Authority would have greater motivation to change if it knew the money had not been cut off completely.