Four score and 70 years ago, the Gettysburg Address entered history 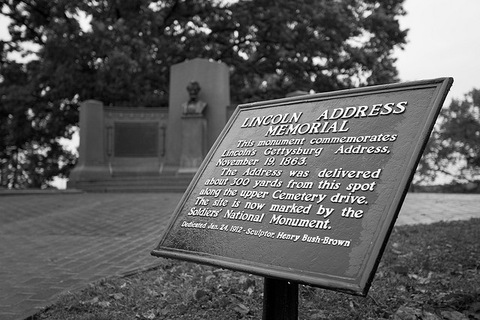 It had been 87 years since the Declaration of Independence was written at the beginning of the American Revolution. November 19, 1883 stood in the midst of the American Civil War, four and a half months after the bloody Union victory in Gettysburg.
President Abraham Lincoln had been invited by Judge David Willis by letter to offer remarks to close the dedication of the Soldiers’ National Cemetery that stood in the aftermath of that battlefield. Willis, who had originally created the idea of the national cemetery and organized its dedication, had told the President his part in the ceremony would be small.
Compared to former U.S. senator Edward Everett’s two-hour dedication speech which preceded Lincoln’s, the president’s 272-word address given in just over two minutes was brief by all accounts, but would go on to become Lincoln’s most iconic.

The Associated Press, which was there for the event, transmitted the speech as read:

Four score and seven years ago our fathers brought forth upon this continent a new nation, conceived in liberty, and dedicated to the proposition that all men are created equal. (Applause.) Now we are engaged in a great civil war, testing whether that nation, or any nation so conceived and so dedicated, can long endure. We are met on a great battle field of that war; we are met to dedicate a portion of it as the final resting place of those who here gave their lives that that nation might live. It is altogether fitting and proper that we should do this, but in a larger sense, we cannot dedicate, we cannot consecrate, we cannot hallow this ground.
The brave men, living and dead, who struggled here have consecrated it far above our poor power to add or to detract. (Applause.) The world will little note, nor long remember, what we say here; but it can never forget what they did here. (Applause.) It is for us, the living, rather to be dedicated here to the unfinished work that they have thus far so nobly carried on. (Applause.) It is rather for us here to be dedicated to the great task remaining before us; that from these honored dead we take increased devotion to that cause for which they gave the last full measure of devotion; that we here highly resolve that the dead shall not have died in vain. (Applause.) That the nation shall, under God, have a new birth of freedom, and that the government of the people, by the people and for the people, shall not perish from the earth. (Long applause.)

While short, the speech managed to affirm Lincoln’s message of staying the course of the war and, in turn, protect democracy, all while tying into the original message of Jefferson’s Declaration of Independence. Even more impressively, reports in 2007 claim Lincoln was also battling a mild case of smallpox during his time in Gettysburg, meaning that one of the most famous speeches in history all occurred in just two minutes by an ailing president.

Though the words as Lincoln read them are widely known thanks to the AP’s transmission, the question remains which copy of the address the president actually read from. Five copies exist of the Gettysburg Address, written in Lincoln’s own handwriting, but each copy is different from the next. The Google Cultural Institute compared the five copies and how they differ for the sesquicentennial observance, alongside two other related exhibits.

Even more is being uncovered 150 years later. Due to the brevity of the speech, no clear photographs of the President delivering the speech had been captured. Three photographs thought to include Lincoln during the event have been discovered in the years since, though disputes over the identification have been made, especially concerning photographs of a crowd taken by Alexander Gardner. John Richter, the director of the Center for Civil War Photography, had identified a supposed view of the President on horseback. Years later, however, former Disney animator Christopher Oakley, while working on an animation of the address, used the slight differences between the two stereographic images, identified a different figure in the crowd as the president, according to an article by Smithsonian.com. The two photographs by Gardner, plus a photograph by David Bacharach (originally thought to be the only photo of Lincoln that day in Gettysburg) were compared by the Smithsonian in September.

And all this time later, the speech is still spreading influence. On November 14, a Pennsylvania newspaper retracted an editorial that originally called the Gettysburg address “silly remarks.”, showing that it may not “perish from the Earth” anytime soon.