Nearly 100 women and girls who say they were sexually assaulted by former USA Gymnastics team doctor Larry Nassar will testify about his behavior and “veiled sexual abuse” during a four-day sentencing hearing in Michigan.

Survivors approached a courtroom microphone one by one on Tuesday, the first day of the hearing in Lansing, Michigan, to read their statements. Many directly addressed their abuser, and many spoke through tears. Standing feet away from Nassar, they detailed how the 54-year-old sports medicine doctor at Michigan State University used his “medical dominance,” as one survivor described it, to sexually abuse girls.

“[The] treatments were pathetically veiled sexual abuse,” one victim said.

Kyle Stephens was the first to speak. Stephens, with her mother by her side, said Nassar began to sexually abuse her when she was six years old. It continued for six years.

Nassar first exposed his penis to her in the basement boiler room of his home, Stephens said, and used “his power as an adult to manipulate me.” Stephens said Nassar also rubbed his erect penis against her feet and penetrated her vagina with his fingers.

Stephens said Nassar, who at the time denied the allegations, also convinced her parents she was a liar when she repeatedly tried to come forward.

“I testified to let the world know that you are a repulsive liar,” Stephens told Nassar, who kept his head lowered as she spoke, “and that those treatments were pathetically veiled sexual abuse.”

“Perhaps you have figured it out by now, but little girls don’t stay little girls forever. They grow into strong women that return to destroy your world,” Stephens added. 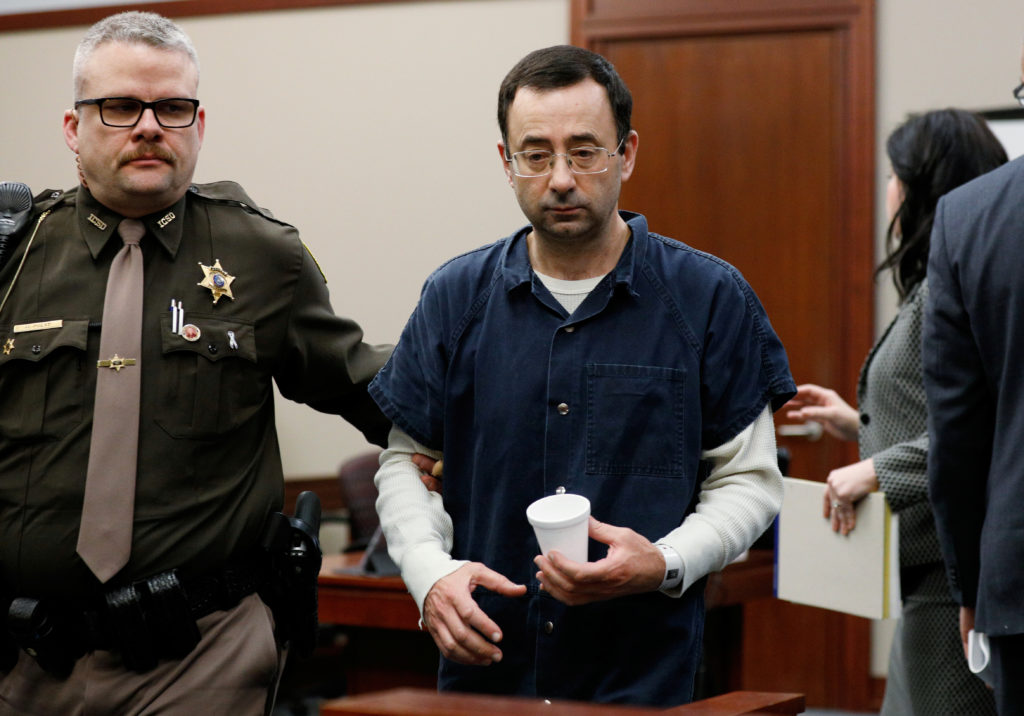 Larry Nassar, a former team USA Gymnastics doctor who pleaded guilty in November 2017 to sexual criminal conduct charges, is escorted by a court officer during his sentencing hearing in Lansing, Michigan. Photo by Brendan McDermid/Reuters

Late last year, Nassar, who was the team doctor for USA Gymnastics for more than 20 years and through four Olympic Games, was sentenced to 60 years in prison after he pleaded guilty to child pornography charges.

In November, Nassar pleaded guilty in the Ingham County Circuit Court to seven felony counts of criminal sexual conduct. He also pleaded guilty to three counts of criminal sexual conduct in neighboring Eaton County Circuit Court. The Michigan attorney general’s office wants Nassar to serve 40 to 125 years in prison. So far, 125 girls and women have filed reports against Nassar with campus police. The women said Nassar molested them at his Michigan State University office, during family visits to his home outside Lansing, and during appointments, including when the parents were in the same room.

On Monday, Olympic gold medalist Simone Biles released a statement that for the first time acknowledged she was sexually abused by Nassar. Biles’ teammates at the 2016 Rio Olympic Games — Aly Raisman, McKayla Maroney and Gabby Douglas — have all previously accused Nassar of abuse.

So far, 125 girls and women have filed reports against Nassar with Michigan State campus police.

“Please believe when I say it was a lot harder to speak those words out loud than it is now to put them on paper,” Biles wrote. “There are many reasons that I have been reluctant to share my story, but I know now it is not my fault.”

Whatever the judge’s sentencing Friday, Nassar will likely serve life in prison.

In court Tuesday, Rebecca Mark recalled a “strange doctor’s appointment” with Nassar when she was 15 years old. Mark saw Nassar for a lower back injury and remembered a medical exam where the doctor “kept prodding and manipulating my legs” with her mother in the room.

Mark said she talked about the appointment afterward with her mother, but didn’t have the words to fully described what she experienced. It wasn’t until years later, when she read the IndyStar story that detailed years of abuse by Nassar, that she understood what had happened to her at the time, she said.

Others took the opportunity to criticize USA Gymnastics for allowing the abuse to continue in a culture that prioritized silence. In her statement, victim Olivia Cowan said Michigan State University and other organizations turned a “blind eye” to the ongoing abuse.

“Where were you when we needed you?” she said, detailing how she endured an “afterlife full of pain and agony.”

Ingham County Circuit Judge Rosemarie Aquilina is expected to hand down a sentence Friday. Nassar will be sentenced in Eaton County on Jan. 31.