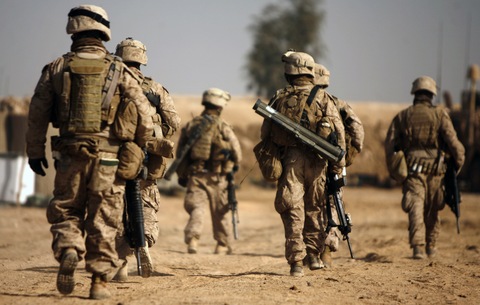 U.S. Marines on the northeastern outskirts of Marjah in February 2010; file photo by Patrick Baz/AFP/Getty Images

As we mark the 10th anniversary of the start of the war in Afghanistan, the Pew Research Center commissioned a poll to explore the military-civilian gap in service, and how it has affected attitudes about war and sacrifice in the post-9/11 era.

Civilians overwhelmingly told Pew that members of the military have made greater sacrifices than the general public. Of the civilians who responded that way, 70 percent said that the sacrifice was not unfair, rather just a part of military life.

With the help of American Public Media’s Public Insight Network, we asked military families from around the country for their thoughts on the notion of “shared sacrifice” over the last 10 years. Here are just a few excerpts from the responses we received. Submit your own answers in the comments section below, on Facebook or on Twitter with the hashtag #sacrificegap.

Patricia Healey, Tucson, Ariz. | no connection to the military

I think the notion of “shared sacrifice” has been embraced in the abstract, but not in reality by most of us who lack a loved one in the military. I know my country is at war, but I see very little direct impact of the past decade of war in my daily life. As for my own activities, I have recognized our veterans by participating in the Pat Tillman Foundation race and by advocating at a low level for suicide prevention in the military. However, this is not much in 10 years. I am torn between feeling ashamed at not doing more and angry at my government for not making it clearer to us how we need to sacrifice.

To many Americans the wars are just intellectual curiosities; they don’t actually know anybody personally involved. With an all-volunteer force, it’s too easy for them to think of war as something that happens to “somebody else’s kids.”

John Carlson, Mazeppa Minn. | member of the National Guard for 16 years, served two tours in Iraq and one in Bosnia

I think many of the populace have done the shared sacrifice thing. The piles and piles of boxes of candy/pencils/soap etc. that were sent to the war were very impressive. And I think it was mostly by people who thought they could not sacrifice in any other way.

Joan Brown, Steilacoom, Wash. | her husband served in the Air Force for more than 32 years

I don’t think we’ve had that [shared sacrifice] concept since World War II. At least now, the military and their families are generally lauded rather than reviled as we were during Vietnam. I hate to say it but during WWII, there was a draft and everyone was impacted in some way, whether they had a loved one in military, worked in a shipyard, were an air raid warden or lived with rationing.

I am not really sure if I can call my contributions in the military a “sacrifice.” All the plans and preparations and calls to duty that I have made have been expected and I was able to adjust for the changes. When one joins the military, they learn to expect the call at any time or any place. When my unit was called up for potential deployment recently again, most of our training time focused on that. The military did a good job in our case making sure we were prepared as best we could.

You should focus more on the family members of the soldiers. How being deployed multiple times has affected marriages [and ] how war changed my personality and my behavior. As soldiers we get paid to go and fight for our country, we follow orders. It is as simple as that, but our spouses, and our children are affected as much or even more than us.

Julia Pfaff, Alexandria, Va. | her husband is currently serving in the military

While I think at the beginning after 9-11 there may have been a little more shared sacrifice. Our country didn’t demand shared sacrifice and now there is little now other than lip service. The wars are like the “dying children in Africa”- intellectually you know it is happening and it is tragic but it really isn’t real to you.