JACKSONVILLE, Fla. — A champion gamer’s decision to open fire Sunday afternoon during a video competition — killing two people and wounding nine others before killing himself — has prompted calls from gamers for more security at esports tournaments.

“It’s very clear that we need to be more proactive for 2019 and beyond,” tweeted Joey Cuellar, the tournament director for the Evolution Championship Series, an esports event that focuses on fighting games.

The tournament is held in Las Vegas and draws some 15,000 people. In March, organizers called the FBI when someone wrote online: “mass shooting @EVO18 see you there.”

That event went off without a hitch, but Cuellar also wrote on Sunday: “The amount of undercover law enforcement at Evo was unprecedented, and we will be installing metal detectors for ALL days next year.”

Esports are big business. A Goldman Sachs report in 2017 valued eSports at $500 million in 2016 and anticipated market growth. Entire companies have sprung up to form e-sports teams, and the Milwaukee Bucks NBA team sponsors an esports team (One of their players was injured in Sunday’s shooting). And it’s no wonder that everyone wants in on the action — careers can be made and millionaires are minted. Epic Games announced in May it will provide $100 million to fund prize pools for “Fortnite” tournaments during the first year of competition.

At Sunday’s Madden competition, the tournament was streamed live on Twitch.tv, an online network that attracts tens of millions of visitors, most of whom watch footage of other people playing video games.

This weekend’s “Madden 19 NFL Classic” was the first of four planned events.

According to the EA sports website – the game’s developer — the top two finishers at the Jacksonville event would earn a spot in Madden Classic main event in Las Vegas, Nevada, that’s scheduled for October.
There in Las Vegas, competitors will play for a share of the tournament’s $165K prize pool, with the winner taking home $25,000.

It’s unclear what kind of security was at the event, which was held at a game bar inside a waterfront mall.
Derek Jones of Santa Fe, New Mexico, came to Jacksonville to compete in the Madden tournament and was sitting in a fenced-in patio outside the venue when he heard the gunshots Sunday. Jones, 26, said he jumped the fence and ran.

Jones said he didn’t notice any security —either private security guards or off-duty police officers— at the venue. He said it’s a complaint he’s had with tournament organizers in the past.

“I’ve been telling them this for a while that you need to make the players feel safe,” Jones said.

He recalled a past Madden opponent who once kept screaming during their match that he was going to beat Jones up after the game. But Jones said that’s the only time before Sunday he ever felt physically threatened.

Electronic Arts, the Madden game developer, released a statement calling the shooting horrific and senseless. “Our focus right now is on those affected, and supporting law enforcement as they continue their investigation into this crime.” 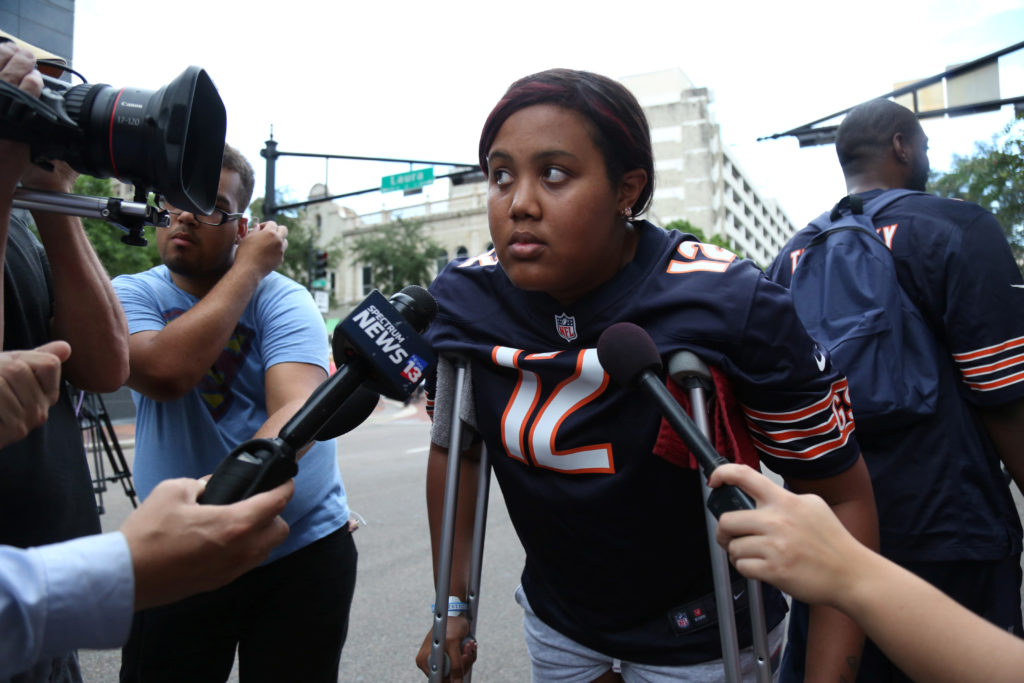 Taylor Poindexter speaks to reporters after witnessing a gunman open fire on gamers participating in a video game tournament outside The Jacksonville Landing in Jacksonville, Florida. Photo by Joey Roulette/Reuters

Some top players and industry watchers said Sunday that security hasn’t caught up with the seriousness of the sport.

“Heartbreaking to hear about the shooting at the Madden event,” wrote Cristian Tamas, the director of esports programs for Twitch, the platform that broadcasts gamers’ live streams. “Unfortunately, this was a matter of when not if. Esport event security, in general, has been extremely poor over the years, we should’ve stepped it up long ago.”

In December, the Call of Duty World League tournament held in Dallas was evacuated — twice — due to bomb threats.

Seth Abner, an XGames Gold Medalist and Call of Duty World Champion, wrote on Twitter in the wake of Sunday’s shooting: “I’ve been saying events NEED better security. Such a damn shame that now event coordinators will respond after a tragedy happens.”

Some gamers say the pressure of competition, the desire to please fans and the intense gaming can lead to anxiety and mental health issues, or worse.

“In the world of competitive video games, mental health issues loom so large and come up so often that the problem somehow becomes invisible,” wrote Tyler Erzberger, who covers esports for ESPN. “In a world where one day you can go from playing in your bedroom to the next being criticized by millions under spotlights, mental health can’t be overlooked.”

His article on mental health and gamers ran online Friday. On Sunday, he tweeted that “99% of the Esports events i’ve been to have had decent to very good security.”

Left: Police officers cordon off a street outside The Jacksonville Landing after a shooting during a video game tournament in Jacksonville, Florida. Photo by Joey Roulette/Reuters