DENVER — Questions about security at a Colorado school where a shooting killed a student and wounded eight others have reshaped a battle over the charter school’s future, prompting emotional reactions from students and parents who consider it a haven for kids who struggled in traditional public schools.

STEM School Highlands Ranch and local education officials have negotiated for months over a new version of the school’s charter set to expire Saturday, and the May 7 attack deepened the tension amid a nationwide debate over charter schools’ independence.

The Douglas County Board of Education already was scrutinizing the performance of the science- and math-focused school over concerns about financial transparency, special education and administrators’ approach to parent complaints. The shooting led to new questions about security and operations.

Two teenage students have been charged in the attack and told police they knew which entrances to use because they would not be stopped, according to newly released court documents. One of the suspects also said he planned to target classmates who taunted him over his gender identity.

The shooting disrupted talks on a new multiyear charter agreement, so district officials proposed a one-year extension to allow time to reach a compromise.

Parents who recently packed a board meeting to oppose the short-term proposal described the school outside Denver as a place where kids feel challenged and supported after struggling elsewhere.

Others warned that a one-year extension would lower the school’s bond rating and hurt its ability to hire teachers, attract students or introduce new programs.

“It feels like our own school board doesn’t believe in us,” said Heidi Elliott, a parent of two students and a member of STEM’s board. 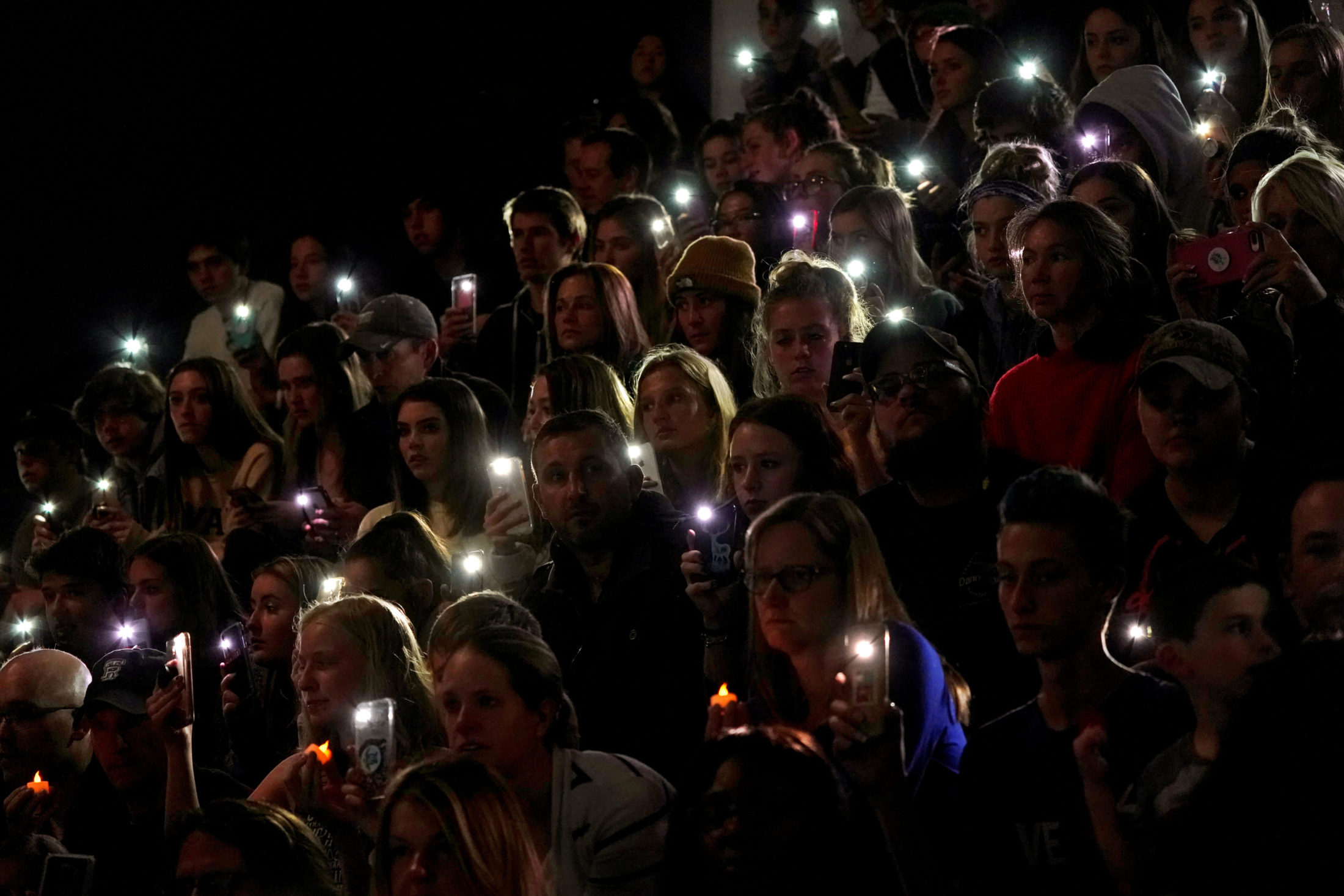 People hold up the phone lights during a moment of silence at a vigil for the victims of the shooting at the Science, Technology, Engineering and Math (STEM) School in Highlands Ranch, Colorado, U.S., May 8, 2019 as U.S. Sen. Michael Bennett (D-Co.) speaks. Photo by Rick Wilking/Reuters

Charter schools are publicly funded but privately managed and designed to be free from heavy day-to-day oversight. Supporters say it allows charters to innovate and find new solutions to educate those who struggle in traditional public school systems.

Critics say the model has accountability and transparency problems that are ripe for abuse. It’s usually during authorization of the school’s contract, or charter, that those issues can be addressed in public.

Local officials with the power to authorize Colorado charter schools have a responsibility to parents and students, said Kevin Welner, director of the National Education Policy Center and a professor at the University of Colorado, Boulder.

“A charter is the legal word for contract, and someone should be able to enforce that,” Welner said. “The authorizer has an important role to play and sometimes that means asking some tough questions and making some tough demands.”

A letter to parents characterized several of the complaints as “test cases seeking to change federal law” and said STEM has more than the recommended number of staff for special education students.

School leaders also pointed to an award from state education officials recognizing student achievement and their performance on standardized tests, suggesting 90% are ready for college by sophomore year.

If the district and STEM can’t reach an agreement before Saturday, the school could appeal to the state Board of Education, said Bill Kottenstette, executive director of the Colorado Department of Education’s Schools of Choice Unit. The district and school also can sign a new contract after the old version has expired, he said .

The debate between the sides heightened after one of the two suspects told police that they used the entrance to the middle school portion of the building because they “knew they would not be checked” while carrying a guitar case and a backpack concealing four guns, according to documents unsealed this week.

School spokesman Chris Arnold would not provide information about the entrances, saying security protocols are confidential “due to the need to keep our school and community safe.”

The court records also revealed that a private security guard responding to the shooting fired twice at a sheriff’s lieutenant, accidentally wounding a female student.

A special prosecutor is reviewing the guard’s actions. An attorney for the guard, whose name has not been released, has declined to comment.

School leadership said STEM will have a full-time school resource officer from a sheriff’s office this fall. They also plan to hire a full-time security guard.

Left: Police vehicles are stationed outside the school following the shooting at the Science, Technology, Engineering and Math (STEM) School in Highlands Ranch, Colorado, on May 8, 2019. Photo by Rick Wilking/Reuters

After multiple tragedies, how Colorado schools are securing the classroom