In a 2011 photo spread for French Vogue, models stretched and slinked on an array of exotic animal furs. Their bodies were covered in jewels. Their faces were flush with rouge. They stared seductively into the camera. Nothing about these scenes would be out of the ordinary in the haute fashion magazine, except that in this case, the models were as young as 10 years old.

The controversial spread caused a flood of criticism from media watchers and feminist bloggers alike — especially here in the U.S.A. But in a culture where sexuality is more accepted, had the French finally gone too far?

In response to the Vogue controversy, the French Senate opened an investigation into whether there was a problem with hypersexualzation affecting French children and if so what to do about it.

And here in the United States a growing body of research has also taken a more critical look at the sexualization of our society.

Social psychologist Sarah Murnen has studied the hypersexualization of women in media for more than 25 years. The research that she and her colleagues at Kenyon College conducted over the last several years found a steep increase in the pervasiveness of images in magazines that show young women in highly sexual ways. The American Psychological Association defines hypersexualization as “occurring when a person’s value comes only from his or her sexual appeal or behavior to the exclusion of other characteristics.”

“We’ve seen three trends associated with these images,” said Sarah Murnen, “It’s now common to see more parts of the body exposed. There is more emphasis on the size of women’s breasts. And easy access to all these images has made it all more acceptable to us.”

In Murnen and her team’s recent analysis of Seventeen magazine’s advertisements and articles, they found that the average number of sexualizing characteristics almost tripled over three decades. In particular, depictions of low-cut tops and tight fitting clothing increased.

In a 2008 study of 1,988 advertisements from 50 well known American magazines, researchers from Wesleyan University found that half of them show women as sex objects. A woman was considered a sex object depending on her posture, facial expression, make-up, activity, camera angle and amount of skin shown.

In images where women were shown in victimized roles, the study found that most of the time they were also portrayed as sex objects. The authors noted that such images may function to normalize violence against women.

“It’s the intensity and extent of being sexualized — not just one or two elements, but much more — that we are seeing increase in the portrayals of women.” said Erin Hatton, coauthor of the study.

Researchers from these studies used their own coding systems to rate the images for sexualizing traits. Those traits vary from study to study but include: body parts shown, body pose, facial expression, activity, camera angle and clothing. Some studies, like the analysis of Rolling Stone covers, assigned a sliding scale of points for each coded trait in order to get a more accurate rating of images. For example, exposure of body parts is usually coded high for sexualization, but does not always register. In the absence of other traits, a woman wearing a bathing suit might not be coded as a sex object while a fully clothed woman in a suggestive pose could be considered a sex object.

To get an idea of how the coding systems work, we decided to put it to the test. While reporting our story in France on the subject of hypersexualization, we picked up a selection of women’s fashion magazines that were on display at an everyday newsstand. From those magazines, we picked out a sampling of representative images of women in photo spreads and advertisements.

We asked experts Sarah Murnen and Erin Hatton to analyze these images using their research methods. Hatton clarifies that her coding system isn’t perfect and was intended for images in American social context. 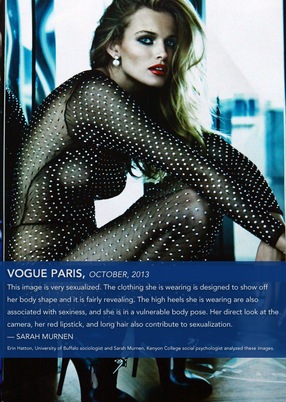 We also want to hear what you think about these images, and the trends towards hypersexualization? What are your thoughts on the increasing sexualization of people depicted in popular culture? Let us know in the comments.

For more on the research behind sexualized images in American media, read the full study “Equal Opportunity Objectification? The Sexualization of Men and Women on the Cover of Rolling Stone.”

Women as Sex Objects and Victims in Print Advertisements