Some calming of Hawaii volcano, but scientists remain wary

PAHOA, Hawaii — The number of homes destroyed by lava shooting out of openings in the ground created by Hawaii’s Kilauea volcano climbed to five as some of the more than 1,700 people who evacuated prepared for the possibility they may not return for quite some time.

“I have no idea how soon we can get back,” said Todd Corrigan, who left his home in Leilani Estates with his wife on Friday as lava burst through the ground three or four blocks from their home. They spent the night on the beach in their car and began looking for a vacation rental.

The Hawaiian Volcanoes Observatory said eight vents, each several hundred yards long, opened in the neighborhood since Thursday. By late Saturday the fissures had quieted down and were only releasing steam and gas.

Scientists said Kilauea was likely to release more lava through additional vents, but they were unable to predict exactly where. Leilani Estates, a subdivision in the mostly rural district of Puna, is at greatest risk. Authorities ordered more than 1,700 residents to evacuate from there and nearby Lanipuna Gardens. 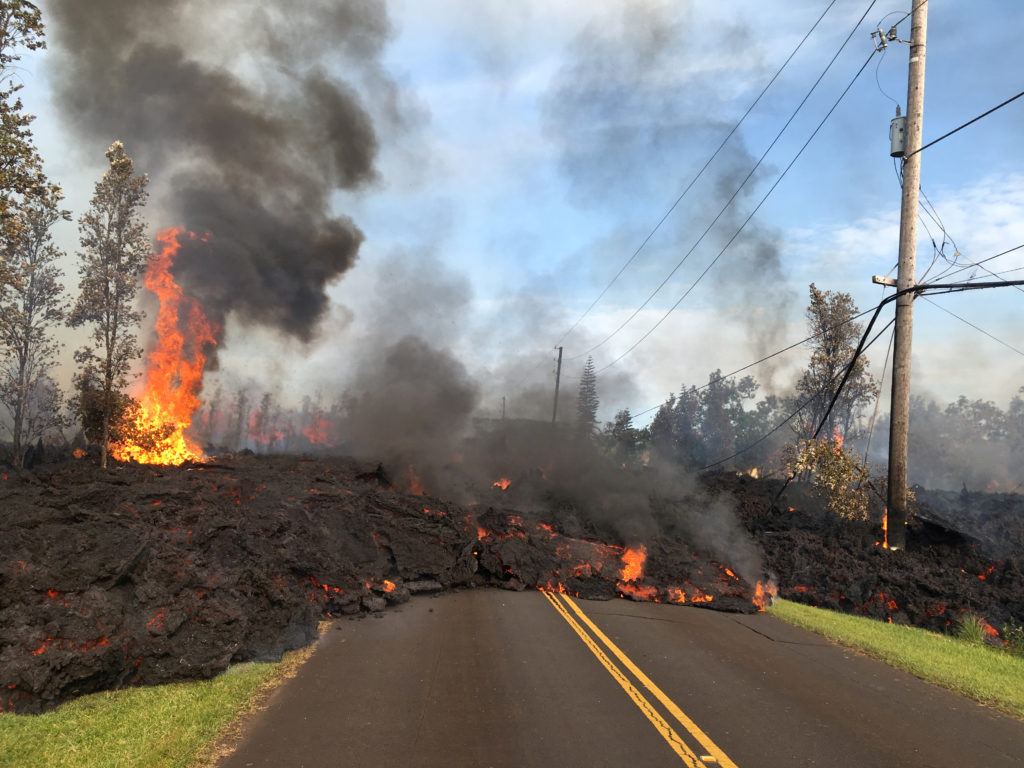 Lava advances along a street near a fissure in Leilani Estates, on Kilauea Volcano’s lower East Rift Zone, Hawaii, the U.S., May 5, 2018. U.S. Geological Survey/Handout via Reuters

Hundreds of small earthquakes continued to rumble through the area Saturday, one day after a magnitude-6.9 temblor hit — the largest earthquake to hit Hawaii in more than 40 years. Magma moving through Kilauea set off the earthquakes, said geologists, who warned of aftershocks.

Authorities cautioned sulfuric gas pouring out of the vents also posed dangers, particularly to elderly and people with respiratory problems. Hawaii County spokeswoman Kanani Aton said some residents may be allowed to return home briefly to pick up medicine or take care of pets if sulfur dioxide levels drop as a result of the calming vents.

Tesha “Mirah” Montoya, 45, said the threat of toxic fumes wasn’t enough to make her family evacuate, but the tipping point was the earthquakes.

“I felt like the whole side of our hill was going to explode,” she said. “The earthquake was what made us start running and start throwing guinea pigs and bunnies in the car.”

Montoya, her husband and daughter don’t know how long they will be away from the three-story octagonal house they built nearly 20 years ago in a patch of “raw jungle.”

“My heart and soul’s there,” she said in a phone interview from a cabin on the north side of the Big Island, where the family had hunkered down. “I’m nothing without the land. It’s part of my being.” 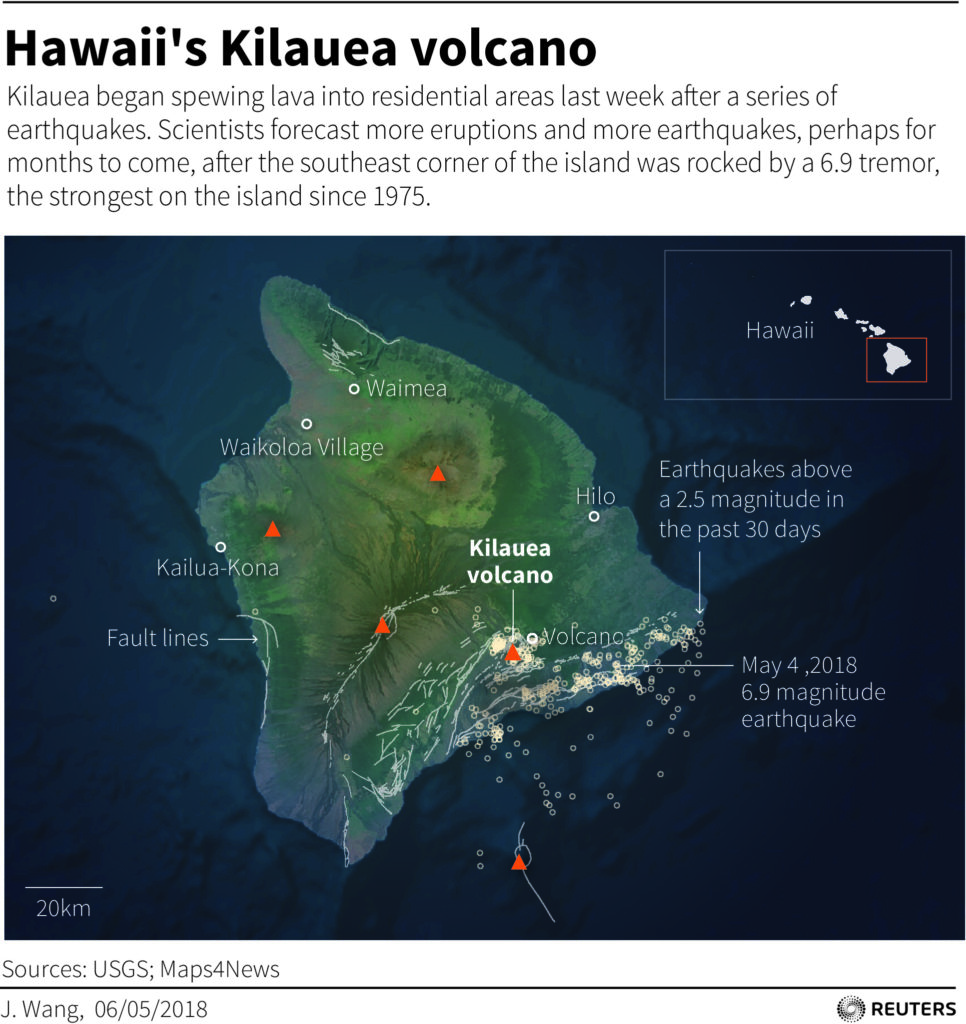 Map locating Kilauea volcano in Hawaii and earthquakes that have occurred in the past 30 days. Graphic via Reuters

Gary McMillan said his home is about 3,000 feet (914 meters) from one of the fissures in Leilani Estates. He monitored remote cameras set up in his home and said his home was still intact.

He’s living out of his van with his wife at the nearby community center and constantly thinks about things they left behind, but understands why authorities evacuated residents.

“I was a critical care nurse for 37 years, so I understand the health implications and the dangers involved,” McMillan said.

Kilauea has been continuously erupting since 1983 and is one of the world’s most active volcanoes. In 2014, lava burned a house and smothered a cemetery as it approached Pahoa, the town closest to Leilani Estates. But this flow stalled just before it reached Pahoa’s main road.

Nearly 30 years ago, lava slowly covered an entire town, Kalapana, over the period of about a year.