Richland County sheriff’s department will hold a news conference to announce the results of its investigation into Monday’s incident when a South Carolina police officer threw a 16-year-old black girl before he arrested her for disturbing the peace. PBS NewsHour will live stream the conference at 12 p.m. EDT

Richland County Sheriff Leon Lott announced the termination of the South Carolina school resource officer who dragged a student during an in-school arrest that was caught on video.

Lott said the maneuver he used was not based on training, nor was it acceptable during Monday’s incident.

“He was not trained to throw the student,” Lott said, adding that the move violated the department’s policy.

However, Lott said while the officer was wrong in some of his actions, the student bore some responsibility for disrupting the class that caused the incident from the beginning.

The officer was placed on administrative leave Monday after brief cell phone footage showed him fling a female student during an in-school arrest.

In videos captured by fellow Spring Valley high school students, the white officer forcibly removed the 16-year-old black student when she refused to leave her seat. He then wrapped his arm around the student’s neck, flipped her desk backward and dragged her across the classroom. The student has not been identified.

According to one of the students who captured the incident, the student had her phone out during class. When a teacher asked for her phone, she refused to hand it over. An administrator was called, who asked the student to leave her desk. She refused, which is when the officer, identified as Ben Fields, was summoned to the classroom.

“She really hadn’t done anything wrong,” Spring Valley student Tony Robinson Jr. told News19. “She said that she had took her phone out, but it was only for a quick second.”

Lott said one video revealed that the student could be seen punching Fields when he grabbed her, but added that the focus ought to be on whether his deputy followed proper procedure.

“That’s what the internal affairs investigation is doing, and the results of that will determine his further employment here,” he said. “Even though she was wrong for disturbing the class, even though she refused to abide by the directions of the teacher, the school administrator and also the verbal commands of our deputy, I’m looking at what our deputy did.”

“Student safety is and always will be the district’s top priority. The district will not tolerate any actions that jeopardize the safety of our students,” Hamm said, adding that Fields would not return to any school in the district, pending the sheriff department’s investigation. 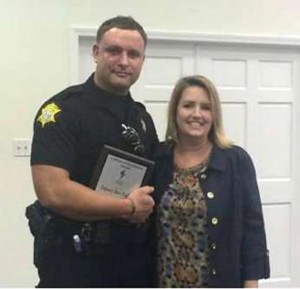 While the details of the lead-up to the incident remain unclear, Lott told WIS-TV that the student was charged with disturbing the peace.

Fields also arrested a second female student in the same classroom. Niya Kenny, 18, came forward and told News 19 that she was standing up for the girl when Fields began manhandling her.

“I know this girl don’t got nobody, and I couldn’t believe this was happening,” Kenny, who was also charged with disturbing the peace, told WLTX. “I had never seen nothing like that in my life, a man use that much force on a little girl.”

Fields has a history of aggression, including an unsuccessful attempt to sue him in a 2007 excessive force and violation of free speech case WIS-TV reported. Fields also faces a lawsuit from a Spring Valley High School student who said he was wrongfully expelled from school. The case is scheduled for trial next year.

WIS-TV also pointed out that a Richland County Elementary School awarded a Culture of Excellence Award to Fields in 2014. According to the Richland County Sheriff’s Department, school resource officers are intended “to maintain a safe and secure learning environment on the school campus, influence the development of positive attitudes by youth towards the law enforcement community, and to reduce juvenile crime through the use of intervention strategies, proactive policing, and networking.”

The video drew sharp criticism and outrage online with the #AssaultAtSpringValleyHigh hashtag. Victoria Middleton, executive director of the South Carolina arm of the ACLU, told The State newspaper there was “no justification” for what happened.

“Regardless of the reason for the officer’s actions, such egregious use of force — against young people who are sitting in their classrooms — is outrageous. School should be a place to learn and grown, not a place to be brutalized,” she said.