MALIBU, Calif. — Just a day ago, Arik Fultz was feeding the horses on his 40-acre ranch near Malibu.

Now, after wildfires roared through parts of Southern California, there’s nothing left of his ranch but charred remains. His family and his 52 horses survived. But two houses, two barns, three trailers and decades of accumulated possessions are gone.

“It just doesn’t feel real that it’s all gone,” he said.

Southern Californians like Fultz battered by the wildfires got to take a breath Saturday and take store of what the wildfires did to them. A lull in fierce winds that drove a pair of destructive fires allowed firefighters to make their first real progress in stopping the blazes.

But a sustained stretch of vicious winds, and the strong possibility of a new round of troubles, were set to start Sunday.

The severely burned bodies were discovered in a long residential driveway on a stretch of Mulholland Highway in Malibu, where most of the surrounding structures had burned.

Benedict did not have any details about the identities of the dead. He said detectives were investigating.

The deaths came as authorities in Northern California announced the death toll from a massive wildfire there has reached 23 people, bringing the statewide total to 25.

Progress also came against the smaller fire, prompting Ventura County officials to allow people in a handful of communities to return to their homes.

Hundreds of thousands across the region remain under evacuation orders, and could stay that way for days as winds pick up again.

Fire burned in famously ritzy coastal spots like Malibu, where Lady Gaga, Kim Kardashian West, Guillermo del Toro and Martin Sheen were among those forced out of their homes amid a citywide evacuation order.

“It was way too big a firestorm,” said Lani Netter, whose Malibu home was spared while her neighbor’s burned. “We had tremendous, demonic winds is the only way I can put it.” 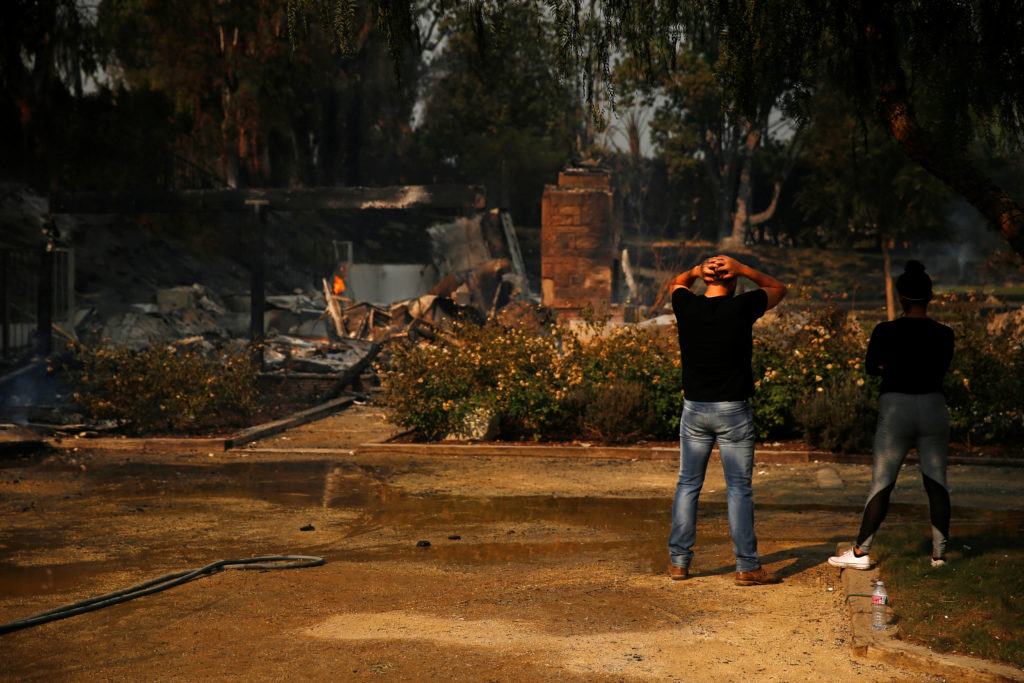 Alexander Tabolsky and Dina Arias look at the destroyed home they lived in as the Woolsey Fire continues to burn in Malibu, California, U.S. November 10, 2018. Photo By Eric Thayer/Reuters

The flames also stretched into the suburb of Thousand Oaks, a city of 130,000 people that just a few days ago saw 12 people killed in a mass shooting at a country music bar.

Wildfire raged on both sides of the city still in mourning, where about three-quarters of the population are under evacuation orders that officials urged them to heed.

“We’ve had a lot of tragedy in our community,” said Ventura County Supervisor Linda Parks, whose district includes Thousand Oaks. “We don’t want any more. We do not want any more lives lost.”

At the Fultz ranch near Malibu, all of the 52 horses survived after a wild scramble to save them.

Fultz’s mother, 61-year-old Tricia Fultz, said everyone expected the fire to stay well south of their property, but shifting winds forced them to take the horses out to open pastures as quickly as they could.

Three were still in their pens when the adjacent barn caught fire, and Tricia Fultz just had to open the pens, burning her hands and hoping for the best.

She, her husband and six others rode out the fire in a tunnel a short distance up the road as the fire burned the hillsides above and all around them.

“It’s so surreal because it’s so dark, and when we’re in the tunnel you can’t see anything,” Tricia Fultz said. “There was so much burning and so much black.”

The fire hopscotched around the Oak Park neighborhood of 70-year-old Bill Bengston, leaving most houses untouched.

The home for 22 years of Bengston and his wife, Ramona, was the only house on his block that burned. And it burned everything.

The hardest to lose were the photos and the mementos handed down through the family — a cigar box that belonged to his great-grandfather; the handcuffs his father carried in World War II.