NEW YORK — Stocks around the world plunged Friday as investors feared that a trade conflict between the U.S. and China, the biggest economies in the world, would escalate. A second day of big losses pushed U.S. stocks to their worst week in two years.

As of Friday afternoon, China’s only response to the tariffs President Donald Trump announced this week was to say it would defend itself. But investors are concerned tensions will keep rising, and that a round of sanctions and retaliation will affect the global economy and corporate profits.

The Chinese government did say it might place tariffs on a $3 billion list of U.S. goods such as pork, apples and steel pipes. That was a response to the tariffs on steel and aluminum imports that Trump announced earlier this month.

The losses were widespread. Technology companies were pummeled.

The losses were widespread. Technology companies were pummeled. They have made enormous gains over the last year, but since they do so much business outside the U.S., investors see them as particularly vulnerable to the effects of a trade dispute.

Stocks sagged at the start of this month after the tariffs on aluminum and steel were announced, but they quickly recovered as the administration said the tariffs wouldn’t be as severe as they first looked. The losses this week were worse, and investors are hoping for hints the sanctions on China are more of a negotiating tactic.

“There could be a possibility of a bounce back if, as this progresses, both sides look like they’re negotiating,” said Lisa Erickson, chief investment officer at U.S. Bank Wealth Management. “There could be further decline if people get a sense there could be more trade restrictions in place.”

Banks also took steep losses as interest rates decreased. They had climbed earlier this week after the Federal Reserve raised interest rates, but then tumbled after the tariffs were proposed. If the tariffs and counter-tariffs reduce economic growth in the U.S., the Fed is likely to raise rates at a slower pace.

The sanctions Trump proposed Thursday could affect as much as $60 billion in imports and are a response to allegations Beijing steals or forces foreign companies to hand over technology. 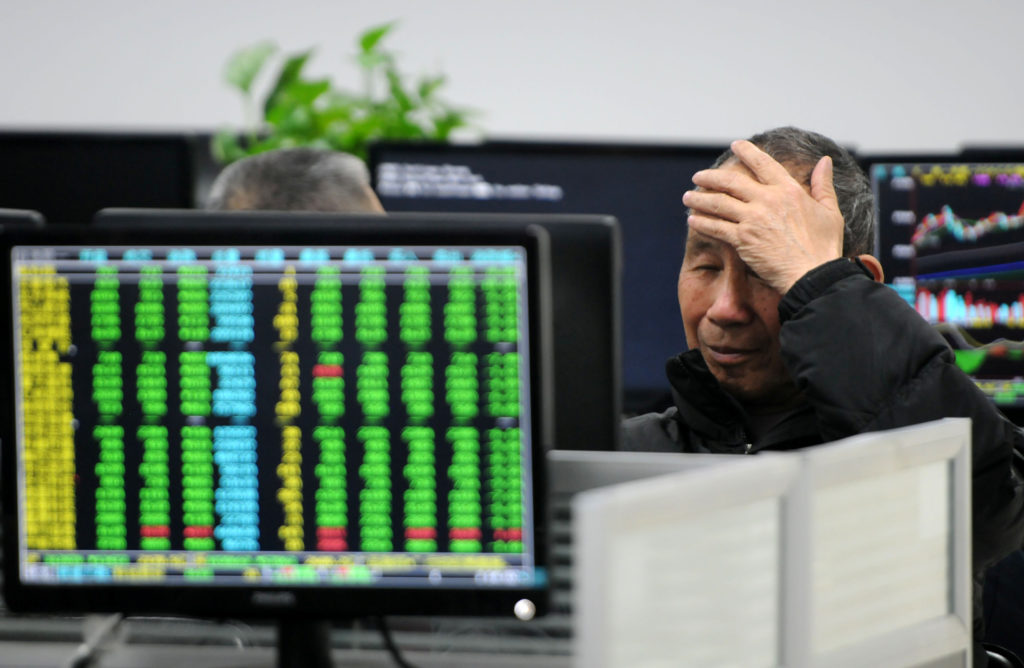 A man looks at a monitor showing stock information at a brokerage house in Jiujiang, Jiangxi province, China March 23, 2018. Photo by China Daily via REUTERS

Big U.S. companies tend to get more of their revenue from foreign customers than small companies do, and that makes them more vulnerable to damage from a trade war. With nearly 1.4 billion people, China is a big market for the largest U.S. businesses.

“We think a lot of the areas in the market with the greatest potential for earnings improvement this year are small- and mid-cap stocks, things that have the biggest benefit from tax reform and are less subject to trade wars,” said Eric Marshall, portfolio manager at Hodges mutual funds.

In another sign investors are nervous, gold and silver prices jumped.

Sales outside the U.S. are especially important for technology companies. Roughly $1 of every $5 in Apple’s sales came from China, Hong Kong and Taiwan in its last year. That doesn’t take into account how much of the manufacturing and assembly of Apple products is done in Chinese factories, which could be affected if tariffs start piling up. On Friday chipmakers fared especially badly.

Defense contractors including Raytheon and Lockheed Martin climbed after President Donald Trump signed a new government funding bill that provides increases in military spending. He had tweeted a threat to veto the measure.

Smaller companies have held up better than larger ones during the recent tumult over tariffs, in part because they do more of their business inside the U.S. and have less to fear from international trade disputes. While the tariffs might drive up their costs, they can pass those along to consumers by raising prices. Retaliatory tariffs on U.S. exports won’t affect them as much.