For a lot of Americans, amusement parks are the stuff of wonderful childhood memories, like that moment your stomach drops right before the first plunge in a rollercoaster. But these parks can also come with disappointment, like when a small child hears “maybe next year” after they don’t reach the height requirement for a “big kid” roller coaster.

Many rides are not equipped to attach a wheelchair, and some children with illnesses may have more trouble with crowded areas or long lines, which are common sights in these parks.

The situation was particularly close to philanthropist Gordon Hartman’s heart. His daughter Morgan has special needs. She often has trouble relating to other kids, and so when the family was on a vacation a few years ago, Hartman realized he needed to do something. He spoke at a TED Talk in San Antonio about his family’s efforts to improve her life. 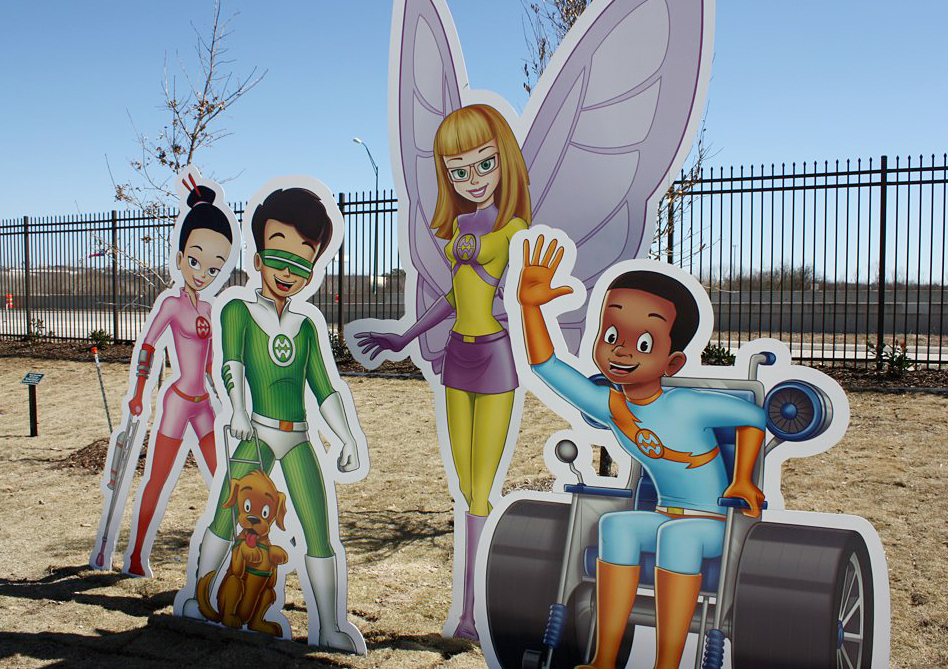 “The idea was that a person in a wheelchair should have the same guest experience at the park as an ambulatory person would have,” says general manager Ron Morander. Photo by Flickr user Matthew Egan

Hartman’s family was at the swimming pool in their hotel when Morgan saw three kids playing with a beach ball.

“Morgan was slowly inching her way over, and she wanted to play with those kids. She couldn’t tell them that. She didn’t know how to really bring about that interaction,” Hartman said.

“So Morgan started moving closer and closer, and she eventually hit the ball. And the kids were looking at her like ‘what are you doing?’ Morgan just wanted to play. What happened at that point, was the nice kids grabbed the ball and got out of the pool.

“Morgan turned around and looked at me like, ‘I don’t get it,’” he said.

That’s when Hartman started looking across the country for places where other special needs children could receive the treatment they needed. He found out there was not much. Some work or school areas in the U.S. are at least partly accessible, containing wheelchair ramps and designated parking. But the same degree of consideration has not been taken into recreational areas such as playgrounds and amusement park rides.

So Hartman decided to make his own amusement park where disabilities are expected, accommodated and accepted by everyone. The park, named Morgan’s Wonderland after his daughter, is fully accessible to those with or without special needs. The nonprofit park opened in 2010 in San Antonio, Texas, and is the first and only amusement park in the U.S. that is 100 percent accessible. People with special needs also have free admission.

Each attraction has both standard seating and compartments for wheelchairs to fit. Staff members are trained to be patient and accommodating.

“The idea was that a person in a wheelchair should have the same guest experience at the park as an ambulatory person would have,” said general manager Ron Morander.

There is a large market for this kind of experience. More than one-fifth of all U.S. households have at least one child with special needs, according to the U.S. Department of Health and Human Services.

People with disabilities have sued for better accessibility. In Castelan v. Universal Studios, the park denied a man without arms and another man without legs entry into the ride Revenge of the Mummy. The ride required each guest to have one arm and one leg for safety reasons, the park said.

The two men filed suit, claiming the amusement park “denied persons with mobility disabilities the full and equal enjoyment of the facilities offered to the general public.” This past January, Universal Studios won the case.

Popular amusement parks, including Disney World, Universal Studios and Six Flags, are partly accessible but not fully. Ground areas in these parks, including shopping and dining areas, are fully accessible. Disney theme parks offer audio description devices, Braille maps and a “disability access service card,” which work like a “Fastpass,” where the guest may wait elsewhere in the park instead of in line.

But the rides themselves are not as accessible. Disney, Universal Studios and Six Flags parks all have different accessibility rules for each ride: some rides allow wheelchairs, while other rides require someone to transport the person out of the wheelchair into a seat.

Hartman said it’s important for special needs children to have play areas where they can play freely and easily with all other children.

“There’s got to be a place where we can take Morgan where everybody understands what’s going on in the element of play and there will be interaction between those with special needs and those without,” Gordon said during the Ted talk.

People have noticed this lack of accessibility. The Americans with Disabilities Act, or ADA, is a civil rights law with a component that prohibits discrimination based on disability in recreational facilities, including amusement park rides. The act contains a guide for amusement park designers that state minimum accessibility requirements.

These types of rides also come with costs. The construction of an amusement park ride is expensive and a new steel roller coaster can costs tens of millions of dollars. Designing and constructing a special section in each new ride would only raise that price. There are also rigid ADA safety requirements for a ride to be considered fully accessible.

But Hartman remains optimistic that the idea of parks like Morgan’s will catch on.

“I believe the day will come when there will be many Morgan’s Wonderland or Wonderland-type accessible parks around the world,” he said.

Annie Shim interned at PBS NewsHour Extra this summer as part of the Syracuse University Newhouse Broadcast and Digital Journalism Master’s program. An American who grew up in Canada with Korean parents, Shim also worked with the PBS station in Central New York, WCNY-TV.