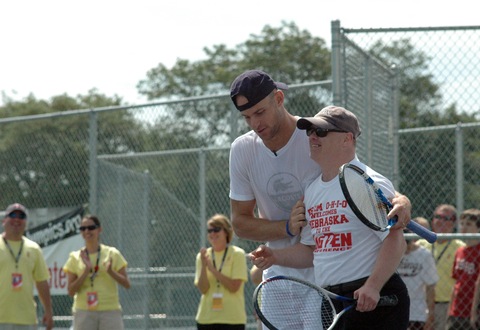 I can confirm there was at least one place in America this weekend where no one was thinking about the lagging economy or the Gulf oil spill, or anything else on our current list of national headaches.

And there’s a good chance this phenomenon will last all week. I know because I was there, near the geographic heart of the country in Lincoln, Neb., host city for the Special Olympics 2010 USA National Games.

Some 3,000 athletes in their teens, 20s, 30s and up, all with intellectual or cognitive disabilities, have come to compete in a roster of different sports, from swimming to track and field, gymnastics and basketball. With the help of their coaches and more than 11,000 volunteers, Lincoln staged the opening ceremony at a University of Nebraska sports complex.

The rafters shook, loudspeakers thundered music, after each participating state delegation was announced.

Reminiscent of the “regular” Olympic games, men and women athletes of all shapes and sizes filed into the arena waving their arms, wearing big smiles and uniforms of khaki shorts, white sneakers and shirts in a signature color.

And so it went, alphabetically through Wyoming, followed by the host team, Nebraska, at a place of honor at the end, with its 286 athletes — more than any other state– each one beaming with Cornhusker pride.

Given that these are individuals who view as daunting obstacles what many of us take for granted — getting an education, finding meaningful work — it was hard to stay unemotional as they slowly filled up the arena, with family, friends and volunteers cheering them on.

Movie actor Eddie Barbanell, who says he has “different abilities,” like all the athletes here, urged them to “have fun,” and “go for the gold.” Golfer Phil Mickelson sent a video greeting, telling the Special Olympians how impressed he is with their dedication.

After Sunday’s kickoff, these athletes will compete for five days in 17 different sports. You can follow their progress at the website for these 2010 USA National Games.

Founded in 1968* by President John F. Kennedy’s sister, Eunice Kennedy Shriver, the Special Olympics today sponsors more than 3 million athletes in 175 countries, including India and China, each with more Olympians than the United States.

A truly global movement, it has broken down barriers and raised awareness of the needs of those with intellectual disabilities, in parts of the world that have little cultural patience for individuals with special needs.

Before his mother died last year, and with her encouragement, CEO Tim Shriver, the son of the late founder, began to focus on the next mission for Special Olympics: involving able-bodied young people “without disabilities” in an ambitious national effort to include their peers with intellectual disabilities in all aspects of school life: academic, extracurricular and social.

Shriver has not only brought this cause — Project UNIFY — to Lincoln in the form of the first Youth Activation Summit, a weeklong series of activities run by young people from across the country, he is challenging educators and leaders of non-profits, service organizations and philanthropists to come up with ways to make the dream his mother endorsed a reality.

Calling it part of the next great civil rights battle of our time, he told a roundtable meeting Sunday at the residence of Nebraska Gov. Dave Heinemann that people will begin to change their attitudes if young people themselves help design ways to include those with special needs in every aspect of life.

Impressive personal testimony came from 17 year-old Danielle Liebl of Cold Spring, Minn., who said she grew so angry after seeing classmates shun or make fun of students with intellectual and other disabilities she created a new group called “The Partners Club” to offer a chance to the able-bodied students to pair up with students with special needs. The effort was so successful it was picked up by six other high schools in Minnesota.

Danielle, who speaks slowly and with difficulty, quoted Dr. Martin Luther King, Jr.:
“Change does not roll in on the wheels of inevitability, but comes through continuous struggle. And so we must straighten our backs and work for our freedom. A man can’t ride you unless your back is bent.”

Adapting the great civil rights leader’s saying to today’s cause, she concluded, “together we must straighten our backs, and push the wheel of change.”

Tim Shriver says there are hundreds more like Danielle in Lincoln this week, ready to carry the message out to the rest of the country.