The Everyday Risks of Jockeying for Position

Rain is falling lightly on a recent Saturday at Pimlico racetrack in Baltimore, Md., and the groomed dirt is starting to getting wet. The racetrack condition reads “muddy” on the infield’s digital scoreboard and the bettors assembled along the railing take note, scribbling on their daily racing entries, changing bets.

Inside, jockey Sheldon Russell takes note, as well. The rain will mean less work for him this afternoon.

The 23-year-old professional jockey from England, who has ridden on the Maryland circuit since 2007, slips into his white riding pants and patterned silks before picking up the day’s program of races in his locker. He studies it and wipes a smudge off his shiny black boots.

Russell was slated to ride in seven of the 11 races on the card, but because of the rain, three of his horses have scratched.

He’s raced and lost once already today, which paid him a flat fee of $45. He has three more opportunities to win for the trainers who employ him.

“Every day you have a chance to make really good money,” Russell says.

The Maryland circuit runs Thursday to Sunday, nine months out of the year, breaking annually for summer.

“That doesn’t mean I only work four days a week, though,” Russell says. “We generally have work to do all seven days.”

If the jockey finishes first, he or she gets 10 percent of whatever the trainer pockets. It’s known as the purse in horseracing.

Russell is no stranger to the winner’s circle. In his first year as a professional, he won five races in one day and has since been one of the circuit’s most successful riders. 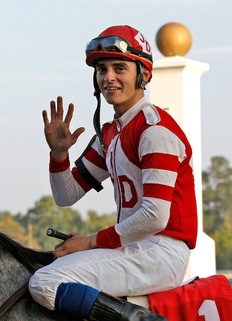 Yet jockeys take enormous risks to compete in the sport — they’re riding 1,000 pound animals at more than 40 miles per hour.

A 2009 study by the Centers for Disease Control and Prevention showed that from 1992-2006, 26 jockeys were killed and 6,546 injuries were reported. The Jockey’s Guild of America says that more than 100 jockeys have been killed since the 1950s.

Two serious injuries have kept Russell from competing for extended periods of time. Riding at Laurel Park five years ago, a horse he was riding broke its leg and fell on him. Russell shattered three vertebras in his back and was sidelined for four months.

Three weeks after he returned, a similar incident happened. He broke two more vertebras in his back, which required surgery.

“It was just one of them things,” Russell says nonchalantly.

Other studies show that the low body-weight requirement for jockeys “increases the risk of acquiring eating disorders and adopting unhealthy behaviors,” according to CDC’s website.

Although the Maryland circuit does not have a weight or height limit, Russell says that most new jockeys aim to be under 109 pounds to entice trainers to hire them.

Standing 5 foot 6, Russell says he’s on the taller side for a jockey. He has little trouble keeping weight because of the strict routine he keeps. On race days, he wakes up at 5 a.m. and has a cup of coffee and usually half of an English muffin.

He then goes to the stables to exercise the horses he’ll ride that day, alternating with them for five hours at the track before it opens to the public.

“It’s nice to get a feel for how the horses are feeling that day,” Russell says.

A nap follows, and a peanut butter and jelly sandwich with a banana is for lunch. After five to seven races in the afternoon, dinner is usually “salmon or something healthy.” His only indulgence: “I like to have a bit of wine in the evening,” he says.

If he’s lucky and able to avoid injury, Russell believes he’ll be able to jockey into his early forties.

On his last race today, Russell’s horse, Press Club, carries him across the finish line before anyone else — paying him close to a thousand dollars. Grinning as he leaves the racetrack atop the horse, it becomes clear why he takes the occupational risks.

“There is nothing like winning a race,” Russell says.