It’s hard to picture more than 100,000 people crammed into Pimlico racetrack. Seats are waiting to be assembled in the infield. There’s no bunting, no rows of portable toilets, no sign of “Kegasus” — hardly any signs at all that the Preakness, one of the jewels of horse racing’s Triple Crown, will soon be run.

On a recent spring Saturday afternoon in Baltimore, the attendance is about what you’d see at a typical high school football game. Most of the race fans are inside, where bettors watch races and wager via simulcast. That would include King T. Leatherbury, one of the most successful trainers in the history of the sport.

Leatherbury looks out onto the infield and imagines the scene a few weeks from now.

“You got the kids over there getting potted,” he says. “They don’t even know that horse racing is going on.”

The Preakness, like the Kentucky Derby and the Belmont in New York, draws a rowdy, partying crowd to its infield. The Kegasus — a half-horse, half-man marketing gimmick dubbed Lord of the Infieldfest — is part of the Maryland Jockey Club’s attempt to draw a bigger paying crowd to Saturday’s event.

At 78, Leatherbury has seen it all. He’s been to enough Preaknesses to know that his sport and his home track have changed over the last half-century that he’s been a trainer. Years ago, before simulcast, the grandstand would be full on a sunny Saturday. Racegoers would come to watch live horses, spend a day at the races. They might even know enough about the local horses, owners, riders and trainers to make a decent wager.

But like with most sports, the game changes. And for Leatherbury, that’s not necessarily a bad thing. He’s always been in it for the challenge.

Horse racing has been in Leatherbury’s life since his childhood. His father owned horses and was a small-time Maryland breeder. After graduating from the University of Maryland and a stint in the Army, Leatherbury got in the game as well. He got his trainer’s license in 1958, started with four horses, and then his career soon took off. 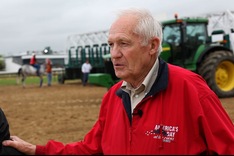 “I kind of thought about it the whole time I was in the Army and studied it and read about it, what I could while I was there,” he said. “And when I came out I was fortunate to have my father’s horses to train. He only had a handful, but that’s what got me started.”

Spend time with Leatherbury around his Laurel Park stable or Pimlico, and it’s soon evident the man has a first name that fits. On several occasions, track employees stop to chat and remark that Leatherbury is king of the place.

Only two trainers in the world have won more races than Leatherbury. His 6,300-plus victories stand behind only the late Dale Baird’s 9,445 and Jack Van Berg’s 6,400-plus and counting.

During the mid-1970s, Leatherbury was the leading trainer in the country and had a stable full of 60 horses. In the 1990s, he regularly led all Maryland trainers in victories. Although he’s never won a Triple Crown race, he’s run three horses in the Preakness: Indigo Star finished fifth in 1978; Thirty-Eight Paces came in fourth in 1981; and I Am the Game, which finished fourth in 1985.

In more than 50 years of racing, Leatherbury has been on the wrong side of the rules governing performance-enhancing drugs and medications four times. All of them, he contends, were honest mistakes.

“When you’ve run as many horses as I did in my career, then naturally my chances of something happening are greater than the average trainer,” he says.

In 1983 and 1991, he received suspensions from the Maryland Racing Commission after his horses tested positive for the painkiller phenylbutazone, or “Bute” — a banned substance. In 1992, he was suspended after another horse tested positive for the drug acepromazine, a tranquilizer. The drugs stayed in the horses’ systems longer than allowed, according to Leatherbury, and he contends some horses need the medication.

Since winning horses are tested for performance-enhancing drugs, it makes no sense to cheat, according to Leatherbury; you’re punished twice: The horse doesn’t get the win and the trainer is suspended. But testing is needed, he said.

Most days now, Leatherbury’s horses race three to four times a week. He visits his barn in the morning, then heads to the track to make his bets. He’s never been a hands-on trainer, he admits. It’s never been his style. He’s more of a handicapper.

“Claiming races” is where Leatherbury made a name for himself. A claiming race is a race in which the horses are for sale. Claiming prices are set by owners and trainers. Claims are made before the race, and the new owner takes possession of the horse after the race.

Using his expertise, Leatherbury chooses when and which horses to race against the competition. Knowing a horse’s strengths and weaknesses – not necessarily whether it has the best bloodline — is key.

Asked if he has a rulebook or training philosophy, he says: “You’re more like a manager of an athlete. You try to maintain the best stock that you can to work with and then you condition them in and pick races out for them that you think the opposition wouldn’t be too tough and then you go from there.”

One can get the sense he’s keeping a trade secret. Either that, or he’s more humble than most.

Asked if he has a favorite horse in all his years of training, he’s coy: “You have favorites for different reasons, but right now anything in my barn that is winning is my favorite.” 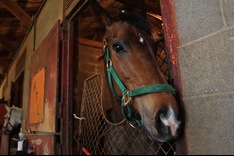 “I’ve had a lot of really nice horses, each one of them is a little bit different in their ability,” he explains. “Some of them had really good speed and others had endurance. Some lasted a long time. One horse won 54 races and raced up until it was 11 or 12 years old. I’ve had some horses who weren’t that fast, but they amassed a lot of purses because they were consistent and they got the job done even though they were in cheaper company.”

Leatherbury’s stable has slowly been emptying over the years. A combination of a bad economy and owners who have died has left him with a small stable of 10 to 12 horses. Yet, he has no plans to retire any time soon. He just enjoys the game too much.

It’s all just part of the game.