CANNOBALL, NORTH DAKOTA — The smoldering fire had been burning at the center of the Sacred Circle for weeks. On Friday, its trail of smoke wafted into the cloudy afternoon sky as John Eagle, Sr. stepped up to the community microphone.

In his hand was an official statement released about an hour earlier by the U.S. Department of Justice. It regarded a lawsuit by the Standing Rock Sioux Indian Tribe against the U.S. Army Corps of Engineers. The tribe claimed the government agency inadequately consulted with them about a multi-billion dollar pipeline project. The pipe’s underground path, designed to transfer up to 400,000 barrels of Bakken crude from North Dakota to Illinois, was expected to snake narrowly close to the Missouri River, the tribe’s main water supply.

About two hundred demonstrators, mostly people who had been camping for weeks near the Sacred Circle, had gathered there to eat and wait. Anticipation over U.S. District Judge James Boasberg’s ruling in the case had been mounting, even though the tribe’s chairman, Dave Archambault II, had tried to downplay the significance of the decision. “Whatever happens, there’s going to be an appeal process,” said the chairman on Thursday before the ruling.

“Construction of the pipeline on Army Corps land bordering or under Lake Oahe will not go forward at this time,” he read aloud. Then he paused, looked towards the crowd over the rim of his reading glasses and declared, “YOU STOPPED IT!”

Men hooted and shot single fists into the air. Women lulu’ed calls of victory. As Eagle read on, the celebration grew. Many people did their best to fight off tears.

“This case has highlighted the need for a serious discussion on whether there should be nationwide reform with respect to considering tribes’ views on these types of infrastructure projects,” Eagle continued, before adding his own commentary that indigenous voices had been heard. A light rain began to fall just as Eagle finished reading the statement.

“Our ancestors are so proud, they are crying with us. They’re here,” Andrea Longoria said. She, herself, could not keep from crying. “It’s a good day to be indigenous, to be a mother, to be a grandmother.”

Longoria, a Cheyenne-Arapaho and Caddo native from Oklahoma, had journeyed to Standing Rock despite a broken leg and work obligations back home. This narrative is not unlike the thousands of people who have made the pilgrimage to these historic Dakota hills to pray for the protection of ancestral indigenous lands. “I feel like this is a legacy we’re leaving our children, our grandchildren and the unborn.” 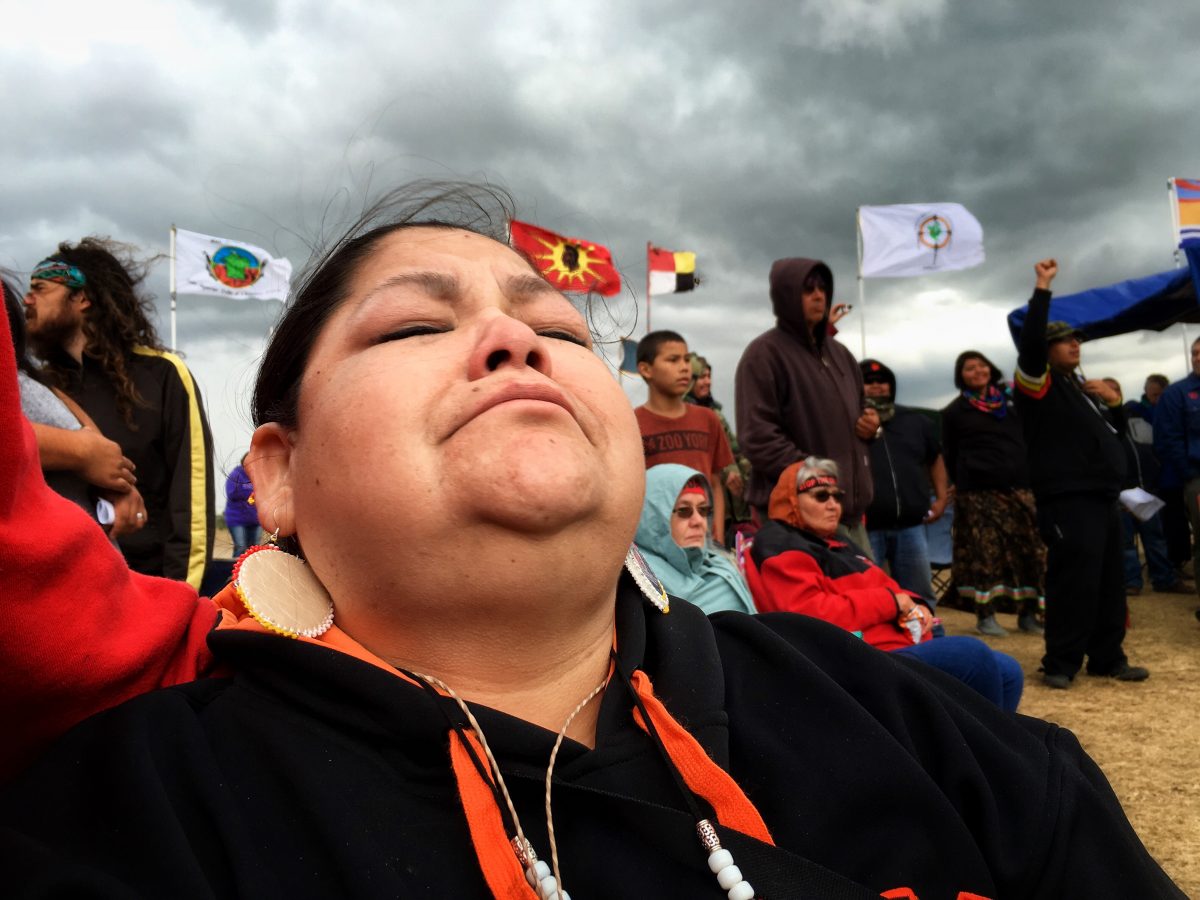 Andrea Longoria (Cheyenne Arapaho / Caddo) fights off tears of joy after learning that construction of the $3.8 billion dollar Dakota Access Pipeline will not be permitted to be built on land belonging to the Army Corps of Engineers and that borders the Standing Rock Sioux Indian Reservation. Photo by Jenni Monet

One small victory amid a larger battle

To people far removed from the celebrations of the Sacred Stone Camp, the story seems far less uplifting. On Friday, Judge Boasberg denied the Standing Rock Sioux Tribe’s request for a temporary injunction. Meantime, Boasberg questioned the tribe’s claims that historic lands were threatened by the pipeline, as it had alleged all along. “This Court does not lightly countenance any depredation of lands that hold significance to the Standing Rock Sioux,” said Boesberg in a memorandum opinion, but added that the tribe had not demonstrated that an injunction was warranted.

That this modern-day battle against the Dakota Access Pipeline is unraveling on the plains of North Dakota is both symbolic and ironic. For centuries, the land here has been the site of Indian massacres that have defined America’s legacy. Not far from the Sacred Stone Campsite where protesters have gathered since April, lies the headstone of murdered Lakota warrior Sitting Bull.

Meanwhile, these once-fertile farming lands of the Sioux were the casualty of a different energy project some 75 years ago. Led by the federal government’s Corps of Engineers, the Garrison Dam, constructed between 1947 and 1953, rushed in with little notice to the Lakota, forcibly displacing them from their homelands and drowning out a life of agricultural subsistence.

More recently, the Standing Rock Sioux Indian Reservation has represented political clout in a region where poverty is high and advocacy at the state level for the Lakota is all but obsolete. In 2014, the tribal community became the first tribal nation visited by a sitting president since 1999. During his visit, President Barack Obama made a vow to Indian Country.

“I know that throughout history, the United States often didn’t give the nation-to-nation relationship the respect that it deserved,” Obama said. “So I promised when I ran to be a president who’d change that — a president who honors our sacred trust, and who respects your sovereignty.”

On Wednesday, Chairman Archambault referred to that visit, after Obama was confronted about the Dakota Access Pipeline dispute during a town hall meeting in Laos.

“When Obama came, I asked him for nothing,” he said. “But he sees how we live here. He’s the commander in chief and he can overrule any branch in the military including the Army Corps of Engineers. Even if it’s just a statement by him on the matter. It means something.”

That the Department of Justice intervened on Friday’s court ruling between the tribe and the Corps has signaled to tribal leaders a nod of support from the President. “When Obama’s administration stepped in, it was just a spiritual healing that was so overwhelming,” said Chief Arvol Looking Horse.

The Lakota spiritual leader performed a ceremonial blessing with Obama during his visit at Standing Rock in 2014. “Our prayers were heard. Thank you, Obama,” Looking Horse said.

‘I’m here for the long haul’

What remains clear, following Friday’s developments, is that the fight here is far from over. Dakota Access and its development company, Energy Transfer Partners, are still permitted to pave the way for the pipeline, although the DOJ has requested a voluntary pause to their construction.

Meanwhile, state advocates in support of the 1,200 foot-long energy project are renewing claims that modern technology makes the Dakota Access Pipeline a safe way to generate tax revenue for the state — and that it cuts down on the amount of oil that travels by train. President of the North Dakota Petroleum Council Ron Ness said even if activists manage to stop the pipeline in court, energy development of the crude is inevitable. “What happens if this pipeline gets stopped? This oil’s gonna get produced,” he said. “There’s absolutely no question. This oil’s being produced today. I think the pipeline continues.”

Back at the Sacred Stone Camp, Morris “Bosco” Wade, Jr. of Pawnee, Oklahoma pulled on a cigarette, taking in the latest developments. “I just phoned my family and told them I’m not coming home,” he said. A tall, strong teepee stood erected behind him. “I’m here for the long haul.”