States formed pacts to reopen together. Will they last?

The regional alliances that governors formed last month to coordinate the process of reopening from stay-at-home orders are facing their first big test, as some states in the pacts begin to move forward with plans to restart their economies while others are holding back until there are more signs the coronavirus is under control.

When governors in the West, Northeast and Midwest announced the bipartisan alliances, they drew widespread praise for taking action in the absence of a clear plan from the federal government for restarting the economy.

But the regional pacts were new and largely untested in mid-April. Now, just three weeks later, divisions have opened up, raising questions about whether states will ultimately act together in deciding when to allow nonessential businesses to reopen, as they planned — and how long the alliances will last.

“This idea of a pact of states to kind of reopen together is probably going to be an idea that’s forgotten six months from now,” said Dan North, a senior economist at Euler Hermes North America. “I just don’t see that being a structural thing that’s going to stick.”

The alliances are loosely bound by similar interests and industries. But the number of COVID-19 cases, how equipped hospitals are to handle them, and how deeply the pandemic has hurt the economy varies widely state to state, and in some cases, county to county, creating tension for leaders trying to put out a united front while also acting in the best interests of their constituents.

The pacts on the east and west coasts are predominantly between Democratic-led states that have stuck together so far by keeping restrictions in place and resisting pressure to restart their economies right away.

The Midwest pact has been far more divided. The alliance there consists of two conservative states, Kentucky and Indiana, and five moderate or liberal-leaning states, among them several key battlegrounds in the 2020 presidential election: Ohio, Illinois, Wisconsin, Michigan and Minnesota.

The Democratic governors of Michigan and Illinois have resisted calls to swiftly reopen their states’ economies. Their positions have sparked rallies in Chicago against Illinois Gov. J.B. Pritzker and at the state capitol in Lansing, Michigan, where armed protestors railed against Gov. Gretchen Whitmer’s tight restrictions in response to the virus.

In late April, Whitmer announced that instead of reopening Michigan’s economy all at once, she planned to do so in phases, based on how different parts of the state are responding to the public health crisis. And on Monday, Whitmer vetoed a bill passed by the Republican-controlled state legislature that would have fast-tracked efforts to get the state economy moving again.

Whitmer’s response to the crisis has thrust her into the national spotlight, raising her profile and fueling speculation that she could land on a shortlist of possible running mates for former Vice President Joe Biden, the presumptive Democratic presidential nominee. 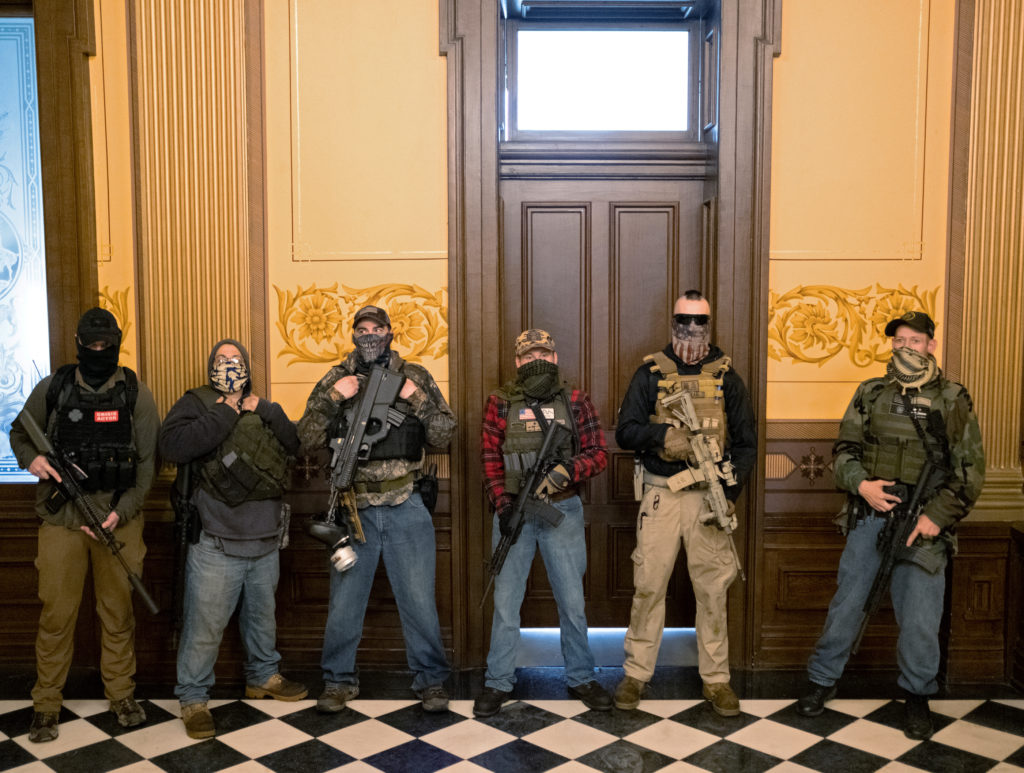 A militia group with no political affiliation from Michigan stands in front of the Governors office after protesters occupied the state capitol building during a vote to approve the extension of Governor Gretchen Whitmer’s emergency declaration/stay-at-home order due to the coronavirus disease (COVID-19) outbreak, at the state capitol in Lansing, Michigan, U.S. April 30, 2020. Photo by Seth Herald/Reuters.

Unlike Michigan and Illinois, the governors of Ohio, Kentucky and Indiana have moved forward with their own plans to quickly restart economic activity in their states.

In Ohio, Republican Gov. Mike DeWine acted swiftly in March to confront the pandemic. He rescheduled the state’s March 17 primary, put a stay-at-home order in place the following week, and extended the order through May 1.

But last week DeWine began the process of reopening the state’s economy by replacing the stay-at-home order with the less restrictive “Stay Safe Ohio” order. The new directive allows manufacturers, construction companies, retail stores and some other businesses in the state to reopen, provided they follow social distancing guidelines and other “workplace safety standards.”

Business leaders in Ohio said the state and the region couldn’t afford to wait any longer to act. The auto and agriculture sectors in the Midwest have supply chains spread across the region that have been hampered by the restrictions, said Don DePerro, the president and CEO of the Columbus Chamber of Commerce. Companies are “chomping at the bit to get rolling,” DePerro said.

“If we do this the right way, if we execute properly and continue to practice social distancing, we can roll out our back-to-work plans in a very deliberate, safe way,” he added.

Others said they thought DeWine was moving too quickly.

“They should begin to [reopen] at the time when the number of infections are small enough that we have the capacity to test anyone and do the contact tracing,” said Joe Logan, the president of the Ohio Farmers Union.

READ MORE: ‘We’ve got to get going.’ States under pressure to plan for the general election amid a pandemic

Forming an alliance makes sense in theory, Logan said, as a way to avoid having businesses in neighboring states operating under different sets of rules. “If I owned a restaurant on the Ohio side of the border and I was still required to be closed, and the Pennsylvania folks are open, I would be upset,” he said.

But the Midwest alliance made for “strange bedfellows,” Logan added, and the political cracks are beginning to show.

The showdown in Ohio underscores the challenges all states face in trying to simultaneously stop the spread of the virus and contain the economic damage.

Facing similar economic problems, Kentucky and Indiana are also beginning to ease state restrictions that shuttered businesses and put people out of work.

Kentucky is planning to reopen its manufacturing and construction industries May 11, followed by other retail sectors later this month. The state is also allowing gatherings of up to 10 people to resume on May 25. 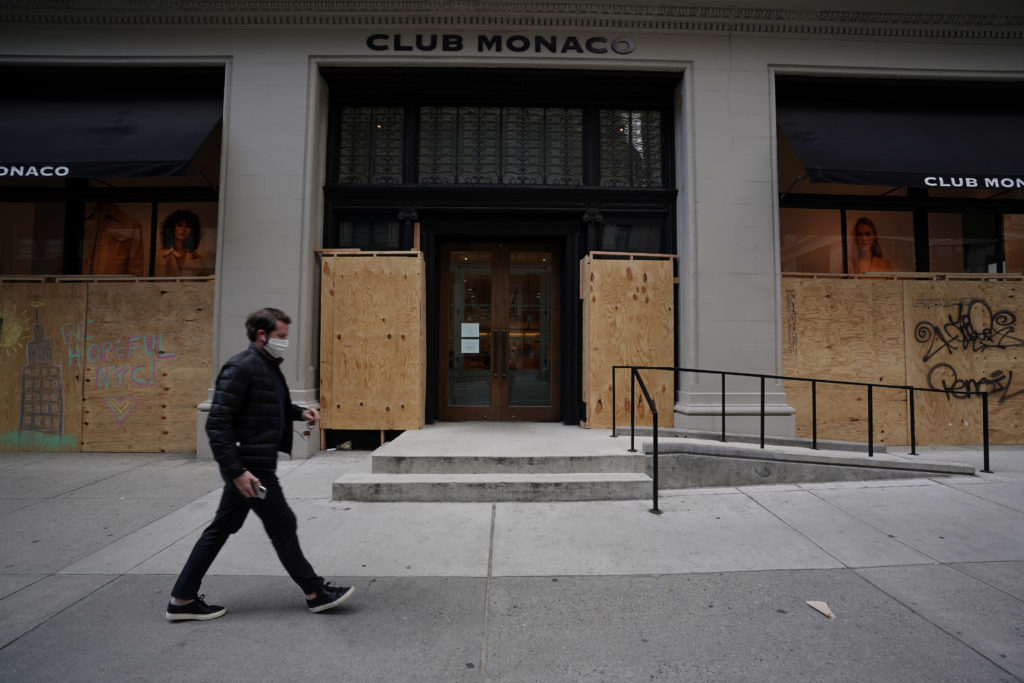 A closed store is covered in plywood, as retail sales suffer record drop during the outbreak of the coronavirus disease (COVID-19) in New York City on April 15, 2020. REUTERS/Bryan R Smith

In contrast, the coastal alliances have remained intact. But in those parts of the country, employers, business groups and others are still debating the steps states should take to get their economies going again.

The East Coast pact consists of six states with Democratic governors and Massachusetts, a liberal state that has a Republican chief executive. The group said last month it would work in tandem on plans to reopen the region’s economy, but has not offered much in the way of details. Several states, including New York and New Jersey, continue to see a high number of COVID-19 cases.

State officials have backed the concept of a regional alliance. The economies of New York, New Jersey and Connecticut are deeply intertwined, and will require a coordinated response before commuters return to work using the region’s busy transportation systems.

Being patient and getting it right now will avoid more problems later on in the year, said state Sen. Joe Addabbo, a Democrat who represents parts of Queens. If the region has “a secondary spike in the pandemic, the restrictions are going to come back,” he said.

On the West Coast, an alliance that started with California, Washington and Oregon, expanded last week to include Nevada and Colorado. In a public statement outlining its goals, the group said it would prioritize reducing public health risks when making decisions about how to restart the regional economy.

The group offered few specifics beyond a commitment to “work together to share best practices” in lifting economic restrictions.

A spokesman for California Gov. Gavin Newsom, a Democrat, declined to offer more details on how the pact is working. A spokesman for Democratic Oregon Gov. Kate Brown said each state in the pact “will have its own specific plan tailored to their individual needs.” But the official said the governors’ offices were consulting one another in the same way that states in the region work together during the wildfire season.

Andrew Hoan, the head of the Portland Business Alliance, said most businesses do not view the West Coast pact as a formal political coalition. “What you’re really looking at is an effort by the governors to demonstrate solidarity,” Hoan said.

Still, he said the pact could help by laying out basic guidelines that businesses and consumers across the region can adhere to as more stores open up in the coming months.

“Waving a wand and reopening is just not practical in the business community,” Hoan said. “It requires a level of specificity on how to reopen that allows business to reopen safely.”

The more the states can coordinate the better, said Lola Milholland, the co-owner and CEO of Umi Organic, a Portland-based company that makes ramen noodles. The company has stayed open by pivoting to online sales, but relies on a supply chain that extends across the region and country, Milholland said.

Milholland said she was willing to wait longer to fully reopen so long as states are putting public safety first. “I’m absolutely feeling patient,” she said. “It’s really a hardship on businesses, but being cautious is important.”

Left: Demonstrators attend a protest to call on state and local officials to re-open the economy in Los Angeles on April 22, 2020. States that formed alliances to reopen are facing a test as leaders look to balance economic and public health concerns. REUTERS/Mike Blake