It’s been just more than a week since 22-year-old Stephon Clark was fatally shot by police in the backyard of his grandparents’ home in Sacramento.

Scrutiny continues to grow over how the encounter was handled by two Sacramento police officers, who fired 20 times at Clark while responding to a 911 call about car burglaries nearby.

California Attorney General Xavier Becerra announced today that the California Department of Justice will be stepping in to provide independent oversight of the investigation into Clark’s death.

“We take on this responsibility in full recognition of the importance of getting it right – because there is nothing more important than respect and trust between law enforcement and the communities that they are sworn to protect,” Becerra said.

Around 9:13 p.m. local time on March 18, two officers from the Sacramento Police Department responded to a 911 call about several car burglaries in Meadowview, a neighborhood in South Sacramento. The suspect was hiding in a backyard, the caller said.

A helicopter from the Sacramento Sheriff’s Department was also dispatched to the scene, and officers inside told police on the ground that a person could be seen in a backyard of a nearby home, using a crowbar to break a window. The suspect reportedly took off on foot, according to police reports, stopping to look into vehicle windows before hopping a fence into the backyard of another home.

Police followed the suspect on foot. One officer yelled, “Hey, show me your hands! Stop! Stop!” according to body camera footage released by the department last Wednesday.

“Gun gun gun!” an officer yells before the shots begin.

Police said officers fired because they feared for their safety. They struck the victim, later identified as Clark, multiple times.

Investigators did not find a weapon at the scene. The only object discovered near the suspect was a cellphone, police said.

Civil rights attorney Ben Crump, who also represented the families of Michael Brown and Trayvon Martin, confirmed on Twitter that he is now representing Clark’s family. The family is planning to file a wrongful death lawsuit against the police department, Crump told the Daily Beast. Crump said in a news conference Monday he was also requesting an independent autopsy. The city has not yet released a coroner’s report.

“All of us who are committed to #socialjustice are demanding full transparency and answers as to how these tragic events unfolded,” he wrote on Twitter.

Clark, a father of two, had been arrested in the past, but his brother told a local CBS affiliate he had recently “really changed his life.”

On Thursday, the day after the body cam footage was released, hundreds of protesters shut down Interstate 5 and blocked fans from entering the Sacramento Kings arena downtown, the Sacramento Bee reported.

In the days since, players from the Sacramento Kings and the Boston Celtics have worn warm-up shirts to honor Clark. “Accountability. We are one,” they say on the front.

Thursday’s protests were largely peaceful. But on Friday, demonstrators clashed with police in riot gear. A video from KCRA shows protesters surrounding a police car, then climbing on top of it.

“I am heartbroken for our city,” Sacramento Mayor Darrell Steinberg said in a statement.

Steinberg initially said he did not want “to prejudge the results of the investigation.” But in an interview with Capital Public Radio over the weekend, he said “what happened Sunday night was just plain wrong. It’s just plain wrong.”

“Our kids and men don’t feel safe,” Steinberg said in a separate interview with the Los Angeles Times. “There is no danger if we do the right thing, if we push aggressively to change what must be changed.”

Local activist Keon Johnson said in a Tuesday news conference that Clark’s death is ”not an isolated incident — it happens over and over again.”

“We want to be a leader not only in our state but in our nation in regards to what relationships with our community look like and what transparency looks like.”

Sacramento Police Chief Daniel Hahn said at a Tuesday news conference he requested the DOJ’s assistance because there is “anger and hurt in our city,” and he wanted to make sure the investigation was as open, thorough and transparent as possible.

“We want to be a leader not only in our state but in our nation in regards to what relationships with our community look like and what transparency looks like,” he said.

Becerra said state investigators will not be dependent on the Sacramento Police Department to conduct its review. While it will not be doing day-to-day evaluations, like collecting evidence and analyzing forensics, they will be overseeing that process.

“We’ll be providing the type of confidence that will let people know that the process was followed properly. I think what people really want to know is that we turned over every stone,” Becerra said.

Advocates and city officials, including Steinberg, have raised several questions about police response in the days since footage was released, including:

Body camera footage indicates officers yelled to Clark to show his hands. It’s hard to tell whether Clark complied with those orders.

“One officer appears to confirm after the shooting that Clark had obeyed their commands to show his hands,” said Mark Reichel, a civil rights attorney who reviewed the body camera footage for the Sacramento Bee.

One important element to note about the officers’ commands: They do not appear to identify themselves as police, Reichel told the Bee.

Why did officers wait to give aid?

Officers held their position for five minutes after the shooting, as Clark lay on the ground.

Officers held their position for five minutes after the shooting, as Clark lay on the ground. Once backup arrived, officers approached Clark and began efforts to save his life, according to police reports.

Officers called out to Clark several times after the shooting, but did not get a response, according to the body cam footage.

“We can’t go over and get you help unless we know you don’t have your weapon,” one woman is heard saying.

Eugene O’Donnell, a professor at the John Jay College of Criminal Justice, told the Guardian that “in an ideal world, the two officers should have immediately provided first aid.”

Sacramento’s mayor said that was an element that must be addressed in the city’s investigation.

Why did police mute their body cameras?

About six minutes and 45 seconds after the shooting, a voice is heard on the body camera footage saying, “Hey, mute.” The video goes silent. It stays that way for the remaining two minutes of tape. Advocates have asked why.

“Any time there is muting on this camera, it builds suspicion — as it has in this case. And that is not healthy for us in our relationship with our community,” Hahn said in an interview with KCRA. 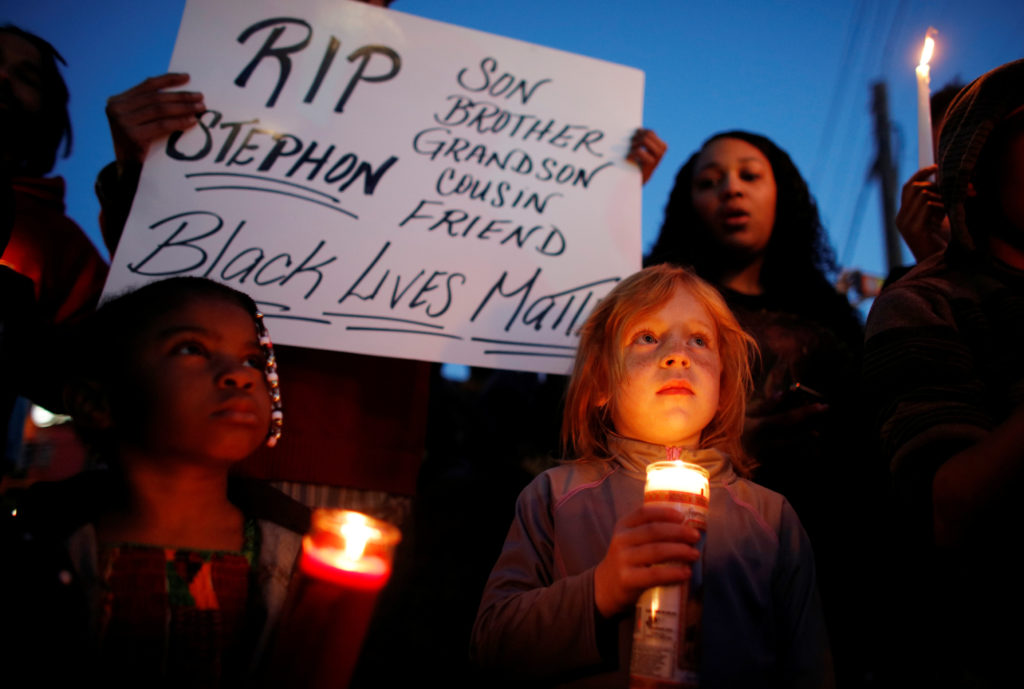 Since 2015, nearly 1,000 people have been fatally shot by police each year, according to the Washington Post’s fatal police shooting database, which began collecting and analyzing data in 2014, after 18-year-old Michael Brown was shot and killed by police in Ferguson, Missouri.

Close to 250 people have been fatally shot by police so far this year, according to the Post’s database. Clark was the 225th.

In the years since Brown’s death, there have been growing calls for greater police transparency and accountability. Many police departments — including Sacramento’s — have changed their policies on things like use of lethal force and transparency around officer-involved shootings.

As part of its oversight of the investigation into Clark’s death, the state Department of Justice will also evaluate the local police department’s policies and training around use of force and de-escalating conflict. Steinberg said the city it is also conducting its own evaluation of those practices. Activists in a separate Tuesday news conference suggested that community members should also be a part of that process.

State and local officials give an update Tuesday into the investigation into Clark’s death.

The city has already implemented several changes to its police protocols in the past several years, many of them after the fatal police shooting of Joseph Mann, a 50-year-old black man, in July 2016.

Mann was waving a knife in the middle of the street when he was approached by police. When officers told him to drop the knife, he instead threw a thermos and walked away from them, shouting threats, according to police reports.

Two officers tried to run Mann off the road and tried to hit him with their police cruisers before chasing him down on foot. They fired 18 times, killing Mann at the scene.

The district attorney’s office cleared both officers involved in the case of any wrongdoing in January 2017. But by October 2017, both were off the force, the Sacramento Bee reported. One had retired, and one was fired after serving months of administrative leave.

When Mann was shot, the department had a policy not to release video while an investigation was pending. That’s changed today, Steinberg said; the video and audio in Clark’s case was released within three days. The department also implemented a body camera policy that requires employees to activate the devices “during any enforcement or investigative activity” — including while “pursuing a suspect on foot.”

The policy says officers should “continue recording until the investigative or enforcement activity involving a member of the public has reasonably concluded.” But it also outlines several instances in which an officer could pause the reporting, including discussion of tactical or confidential information with other officers. It’s not clear why audio was muted on officers’ body cameras after Clark’s shooting.

The investigation into Clark’s shooting will answer whether many of these policies are working, Steinberg said.

Activists hold a news conference Tuesday about the death of Stephon Clark.

“Certainly this case has not gotten the national attention that I think it deserves,” Sharpton said Sunday on his show on MSNBC. “Twenty shots at an unarmed man. I immediately was alarmed by this.”

Hahn said Tuesday they were not yet naming the officers involved in the shooting, saying they had received numerous death threats. They added they would release the names if it became safe to do so.

The city council has replaced its regular meeting Tuesday with an “open dialogue” to address concerns about the shooting. The local chapter of Black Lives Matter and other activists are planning to speak, they said Tuesday.

Steinberg is also calling for a public discussion April 10 to address the city’s policing protocols and whether they should change. Among the questions he’s asking:

“We can do that thoroughly without prejudging anything in this investigation,” Steinberg said.

Left: Stevante Clark speaks to the crowd during a vigil to protest the police shooting of his brother Stephon Clark, in Sacramento, California. REUTERS/Bob Strong.