How a city reckons with its ‘Straight Outta Compton’ roots

Eric Wright Jr., son of famed N.W.A. rapper “Eazy-E,” wears a diamond-encrusted mini bust of his father around his neck. The real “E” was a 5-foot-5 rapper with a relatively high-pitched voice that boomed through the late 1980s as the frontman of gangsta rap collective N.W.A. The inner-city youth of Compton, California, finally had their spokesmen. 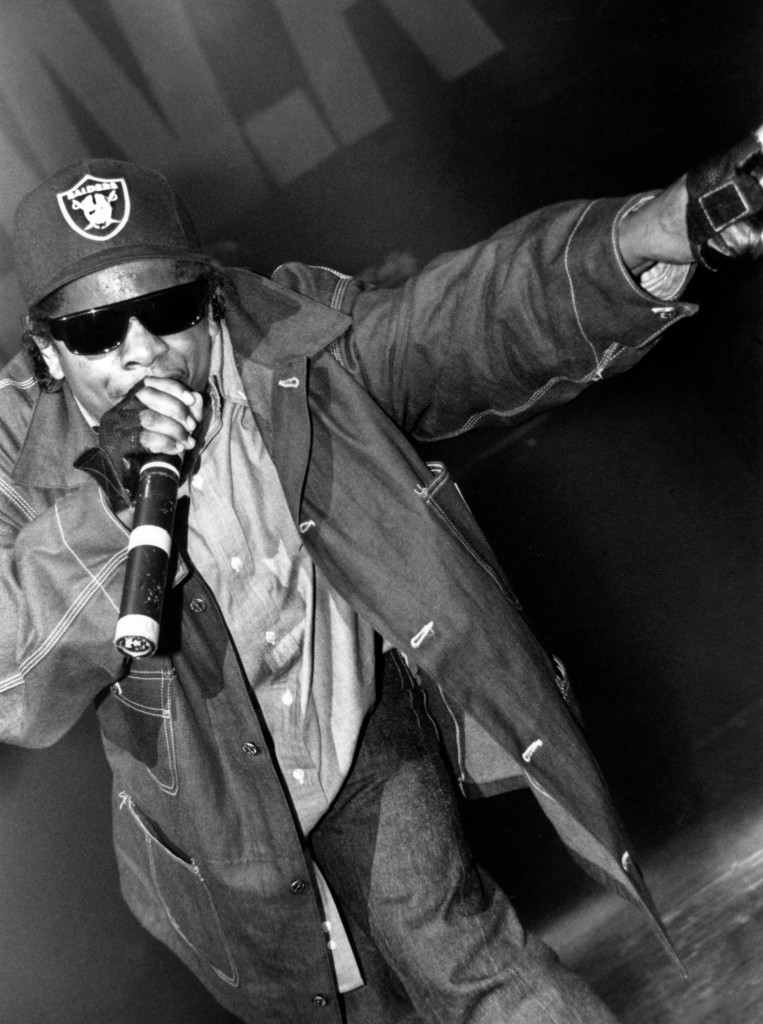 N.W.A.’s Eazy-E performing at Brixton Academy in London in 1991. Photo by Michelle Poorman/PYMCA/UIG

On “Straight Outta Compton,” N.W.A.’s 1988 debut album, and the subject of a new movie that comes out today, Eazy-E and company spelled out in lyrics the anger and frustration that was brimming in a generation of black youth. The album was credited with giving a “voice” to an often-ignored community. And if N.W.A., self-proclaimed as “the world’s most dangerous group,” was profane and aggressive in their delivery — at least they were heard.

It was one of the first rap albums to portray street life, “you know, dope dealing, gang banging and what the police were going through,” Wright Jr. said.

Most famously, N.W.A’s “F*** tha Police” promises “a bloodbath of cops, dying in L.A.” Decades before the Black Lives Matter movement, Michael Brown and Eric Garner and years before the Rodney King police beating, N.W.A. rattles down a list of grievances against law enforcement. The FBI responded with a warning letter to the group’s label.

Eazy-E didn’t write the lyrics, but it was his life story as a former drug dealer that inspired a lot of N.W.A.’s music. He died on March 26, 1995, of lung and heart complications from AIDS. He was 31. And while some critics have argued for his spot on rap’s Mount Rushmore, the rapper’s grim narratives of gang banging and drug dealing about his hometown have outlasted the man.

That notoriety, along with N.W.A.’s raucous debut going multi-platinum, put Compton on the pop culture map. As the hub of Los Angeles, Compton is city of 10 square miles and more than 97,000 people. It saw a rise in violent gang activity in the late 1980s and early 1990s.

“The only time it seems Compton can get any press is if Suge Knight is running over somebody.” — Compton resident Donald Phillips
But the city has been working to change that image. If the world paid attention then, residents want to be heard again: Compton is not what it used to be.

Longtime resident Donald Phillips says when he tells people he lives in Compton, they immediately associate it with the gangster image.

“The only time it seems Compton can get any press is if Suge Knight is running over somebody,” Phillips, 53, said. “Otherwise, you can’t get any camera newspeople out here for anything positive that goes on.”

Phillips is used to turning on his “defense mode” of explaining what else Compton has to offer, including a flight school where the city’s youth have broken world records.

“I don’t try to sugarcoat and make it sound like everything’s rosy,” he said, “but I do try to point out all the positive things about Compton.”

Several Compton residents told the NewsHour they have high hopes about Aja Brown, an urban planner who took over as the city’s youngest-ever mayor in 2013, at the age of 31. Brown has promised to help shed the city’s notorious image with new jobs, housing and commercial developments, farmers markets and art galleries to attract outsiders. Brown even has said that she envisions Compton as the “New Brooklyn.”

Phillips, like many of the residents we talked to, said the transition was already occurring. 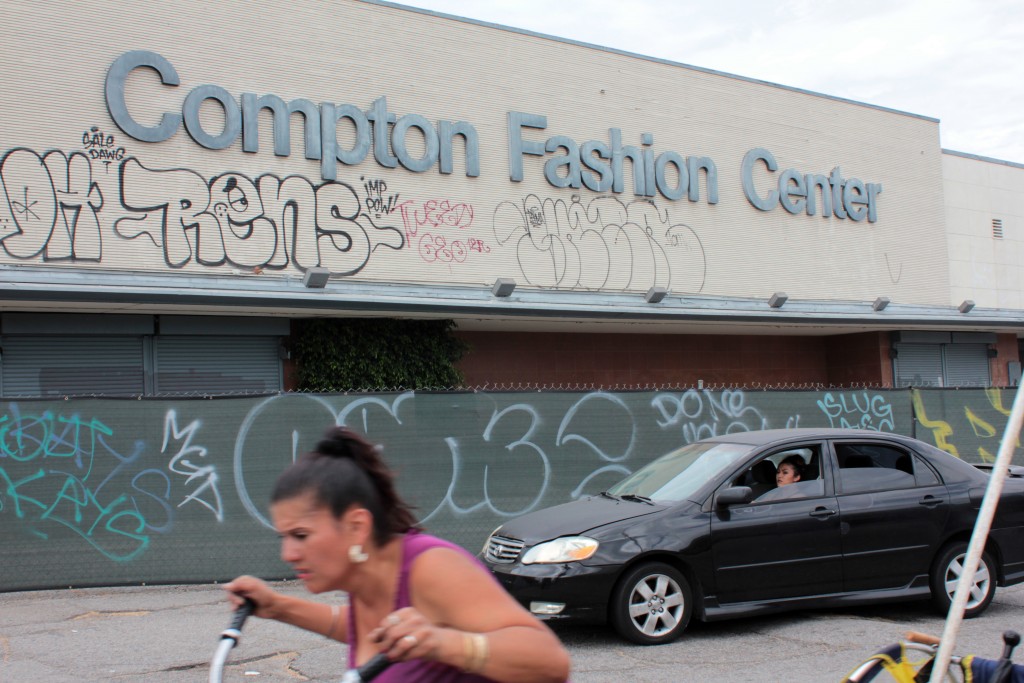 The Compton Swap Meet, also known as the Compton Fashion Center, closed its doors in January to make way for a rumored Wal-Mart. The site was vital to the burgeoning gangsta rap scene where local shops, such as the Cycadelic Music Corner, supported albums like “Straight Outta Compton” when other retailers and radio stations turned away. Photo by Joshua Barajas/PBS NewsHour

“You’re starting to see things that previously, maybe five years ago, never thought would come to Compton,” he said.

Residents speak of the bevy of businesses that have cropped up in recent years, including a Target, Best Buy, Chipotle and two Starbucks within walking distance of each other, while empty lots await further development. Phillips said Compton residents would normally have to travel outside the city to find these businesses.

But Brown still has to field questions about the city’s reputation. She told the Telegraph that a U.K. official once told her that Compton ought to “keep making that gangsta rap.” It didn’t help that one of Compton’s previous mayors, Omar Bradley, who had served time on corruption charges, described himself as a “gangster mayor.” His conviction was overturned by an appeals court in 2012.

Compton residents like Rameisha Davis, 35, told the NewsHour they were proud of N.W.A., but they didn’t want the city’s violent history — immortalized in the group’s songs — to define its residents.

“A lot of people, to me, are taking a little more pride in the city,” Davis said.

Mayor Brown has reached out to other one-time Compton residents such as rappers Ice Cube and The Game, and tennis superstars Venus and Serena Williams for help with revitalizing the city. Dr. Dre said he would donate all the royalties from “Compton,” his soundtrack to the N.W.A. biopic, to fund a new arts center in the city. 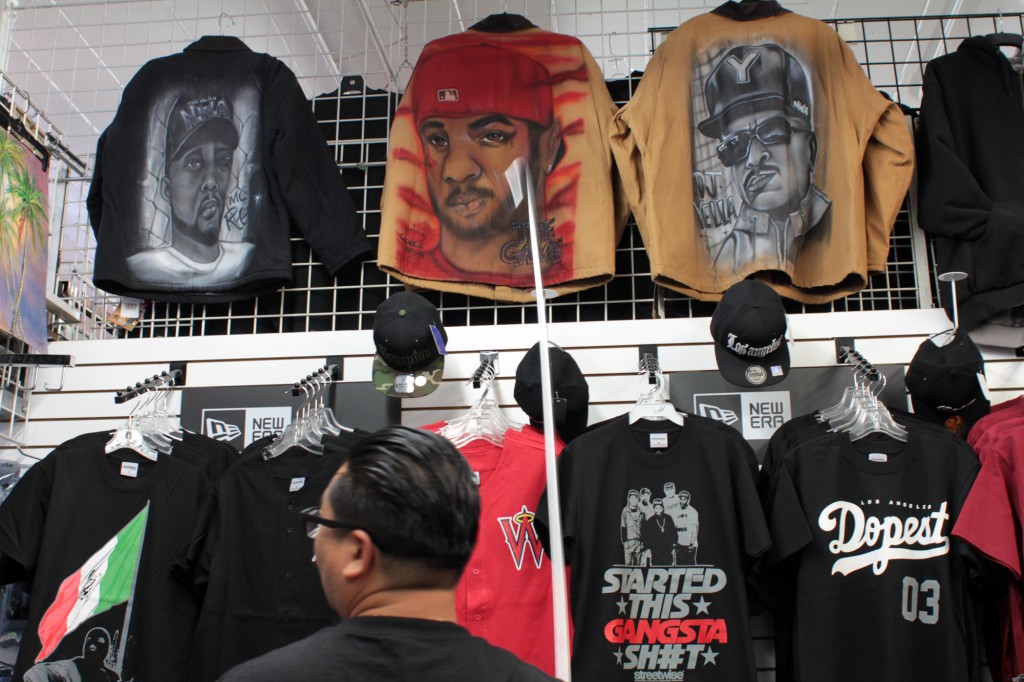 Some of Compton’s finest such as rapper The Game and N.W.A. founding members MC Ren and DJ Yella adorn jackets at the Cycadelic Music Corner in Compton. Photo by Joshua Barajas/PBS NewsHour

The view from the streets today

In 2000, the Compton police department was dissolved as a cost-saving measure, and the L.A. County sheriff’s department took over patrolling duties for the city. Joseph Iberri joined the department at that time. Now a sergeant in the department’s gang unit, Iberri, 43, says it’s safer in Compton.

In the early years, public places like Kelly Park were the stomping ground for the Kelly Park Compton Crips — Eazy-E’s one-time gang — among others, Iberri said.

“You didn’t go hang out in the park,” he said. “Over time, that’s changed. Kids playing soccer … People [walking] their dogs. I know things are safer.”

Demographics have also changed. According to 2013 census statistics, Latinos represent 67 percent of the city’s population in what was once a majority black community. But, blacks in Compton accounted for more than 60 percent of homicide victims last year, the Los Angeles Times reported.

“The more things change, the more they stay the same,” Iberri said.

Gang activity has spread online, giving residents even more concern. After the death of 27-year-old Kenneth Lynn Peevy in mid-July in nearby Westmont, the hashtag #100days100nights emerged on Twitter and Instagram. It was here that a local gang vowed a 100 days of violence to avenge his death in South L.A., the Los Angeles Times reported.

Damn stay safe LA RT @briella_xoxo: Yo this #100days100nights is no joke!!! Spread the word . pic.twitter.com/CkMG7JzpSW

The L.A. Police Department has since tried to quell fears about the rumored eruption of violence. LAPD Deputy Chief Bill Scott called the situation “a bunch of hype” and said he was more concerned about the fear it created.

Jalonni Diggs, 26, knew Peevy. He said the two were good friends in high school. Diggs has never been in a gang, but like several of the Compton residents we talked to, he has known family and friends affected by gang violence.

Diggs grew up within walking distance of Compton’s Centennial High School, once attended by Dr. Dre and rap wunderkind Kendrick Lamar. Diggs said he had friends, including Peevy, who were in gangs and “on their way to do something bad, they would always tell me, ‘Go to the basketball court, and go do some homework.’” 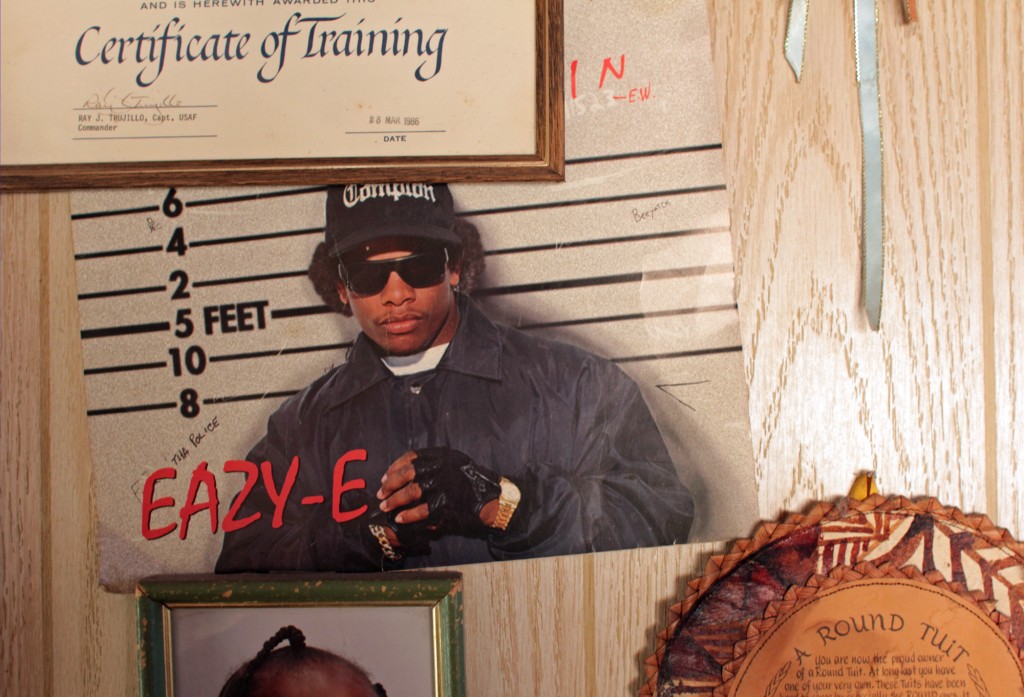 Plenty of Eazy-E memorabilia appear throughout the rapper’s childhood home in Compton. The late rapper’s son other family members continue to live there. “I’m not scared of my city,” Wright Jr. told the NewsHour. “If you can adapt to this life, always flooring, always staying on your toes, it prepares you for life.” Photo by Joshua Barajas/PBS NewsHour

Ice Cube penned the lyrics. Dr. Dre was the heartbeat. MC Ren and DJ Yella filled out the original line-up. But Eric Wright was not a rapper — at least not yet. His bandmates have often described Eazy-E as a hesitant performer, one who had to rap in the dark to record a song in the studio. But that nervousness would soon pass.

“He wasn’t an emcee, he was an entrepreneur,” Wright Jr. said, adding that before the wide availability of the Internet, new artists had to sell out of their car trunks. His father helped moved that business into stores by founding his own independent rap label, Ruthless Records, to help support N.W.A.’s music.

But it wasn’t all about the salary, it was also about reality.

Wright Jr. embraces that history. He lives in the same Compton house where his father grew up. He even started rapping as “Lil Eazy-E” to continue his father’s legacy.

“I could care less about being the best rapper,” Wright Jr. said. “I miss him. I feel like the world’s forgotten about him; he’s not getting his due justice.”

His younger brother Derrick Wright, also known as the rapper “Baby Eazy-E,” is at his side as he remembers his father.

“He was a genius. He was a legend in his music. In between me and my brother, we’re going to continuously keep that going on.” 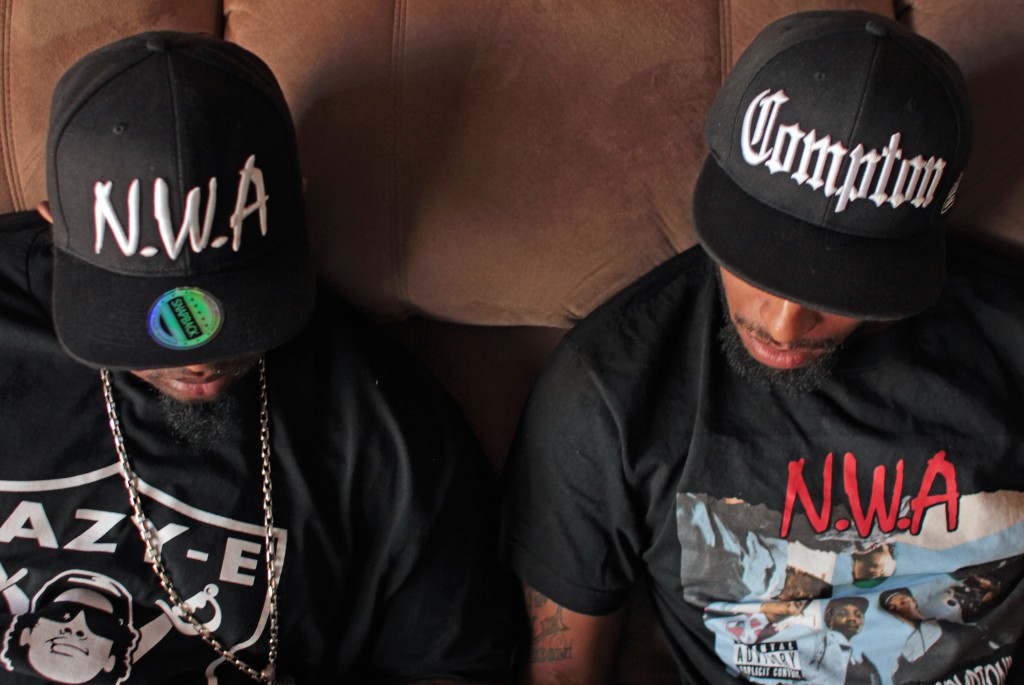 Posters of the upcoming biopic appear throughout the city, reminding the people of Compton of their past.

But artists from the city have since added to the mythology, including repeated assurances — “We gon’ be alright — from hometown hero Kendrick Lamar.

Resident Jalonni Diggs said it was artists like Lamar who kept him hopeful and helped him get through college. He graduated from University of California, Riverside, in 2011, and is currently a realtor in the Los Angeles area.

“I can only imagine what ‘Straight Outta Compton’ did for those who were in high school or college at the time,” he said.

For Diggs, too, music is his inspiration, but not necessarily a model.

“You can do something other than gang bang. Your life is worth more than a death sentence, a funeral or a face on a shirt.”