Strengthened by Standing Rock, Native Americans march on D.C. What’s next for the movement?

Despite bitter cold, wind, rain and hail, hundreds of members of Native American tribes and supporters from around the country turned out Friday to march on the White House, in an effort to turn the momentum of the Standing Rock protests into a more sustained movement for native rights.

The march and a rally in Lafayette Square across from the White House came after four days of protest, prayer and lobbying on Capitol Hill, where Native communities called for the protection of natural resources and demanded the new administration honor treaties with indigenous peoples.

Those issues were drawn into sharp focus last year during the months-long fight over the Dakota Access Pipeline at the Standing Rock reservation. Oil is set to flow as early as next week through the pipeline, a $3.8 billion, 1,172-mile project running from North Dakota to Illinois.

“Since the very beginning, we understood that Dakota Access was just one part of a greater fight for indigenous rights and indigenous sovereignty,” said Dallas Goldtooth of the Indigenous Environmental Network, one of the more active groups behind the Dakota Access protests at Standing Rock.

Last July, the Standing Rock Sioux and Cheyenne River Sioux Tribes filed a lawsuit to stop the pipeline’s construction, sparking months of protests. In court filings, they said the pipeline “threatens the Tribe’s environmental and economic well-being and would damage and destroy sites of great historic, religious and cultural significance.”

The executive order and Army Corps decision was a blow for opponents of the pipeline. But Goldtooth said the momentum from the fight signaled the start of a larger movement.

“That resistance is growing,” he said. “The fire of Standing Rock burns brightly in countless communities across the country, native and non-native.”

Logan Betts, a student at George Washington University, decided to come to the march after following the protests at Standing Rock — including reports of violent confrontations between law enforcement officials and protesters in November — for months in the news.

“Today, if they can stand out in the cold, then we can come out and support them,” Betts said. 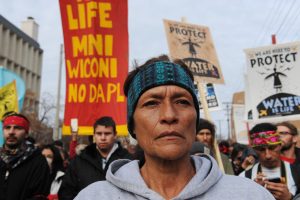 In fall 2016, thousands marched against plans to pass the Dakota Access pipeline under Lake Oahe and near the Standing Rock Indian Reservation, North Dakota. Photo by Stephanie Keith/Reuters

Veterans for Peace, a nonprofit that promotes alternatives to war, said members of the group from Arizona, New York, Michigan, North Carolina and Mexico traveled to Washington to participate.

Douglas Ryder, 70, a veteran from Durham, N.C. who attended the march, said he was concerned that President Trump was too focused on strengthening the military instead of providing more federal funding for issues like environmental protection.

“I’m here to speak for those who have no voice: the water, the children, the seven generations coming down the road,” Ryder said. “Our policies are taking away resources from essential issues.”

Before taking office, Trump’s transition team met twice with tribal leaders from around the country, according to reports from Politico and the Indian Country Media Network. But the community remains wary. The White House did not respond to NewsHour’s request for comment on its relationship with the Native American community.

Four Arrows, an indigenous member of Veterans for Peace, said the country’s hawkish foreign policy and approach to energy development began negatively impacting indigenous people and the environment long before Trump got elected. Still, he said, he appreciated that people were becoming aware of the issues.

“When Trump was elected we had a lot of non-Indians supporting us, almost 15,000 people at Standing Rock, crying and mad, and the Indian people, we were all just sort of smiling,” said Four Arrows, a former dean of education at Oglala Lakota College. “And finally one Lakota woman went over to a lady … and said, ‘Honey welcome to our world.’ Because we’ve been living with this for 200 years.”

“This is in your face now. Americans are waking up.”

The good news, he added, “is this is in your face now. Americans are waking up, and starting to realize what we’ve done in killing the indigenous worldview [and] the biodiversity of the planet.”

Though the battle over the Dakota Access Pipeline may be lost, indigenous advocates on Friday said they are seeking to use that battle — and the tactics they learned there — as a segue to launch a broader fight over other pipelines.

One of the targets is the 148-mile Trans-Pecos Pipeline, which will carry natural gas to Mexico, passing through the Big Bend region’s Chihuahuan Desert, one of the most biologically diverse areas in the country. The Society of Native Nations has erected a camp there to help stop the pipeline, in collaboration with local communities.

The Trans-Pecos pipeline is being constructed by Texas-based Energy Transfer Partners — the same company building the Dakota Access Pipeline.

Vicki Granado, a spokeswoman for the company, wrote in an email that while “we respect that there are a number of opinions on our country’s need for more infrastructure,” domestic demand for oil, gas and other fossil fuel-based products “is only increasing, not decreasing.” 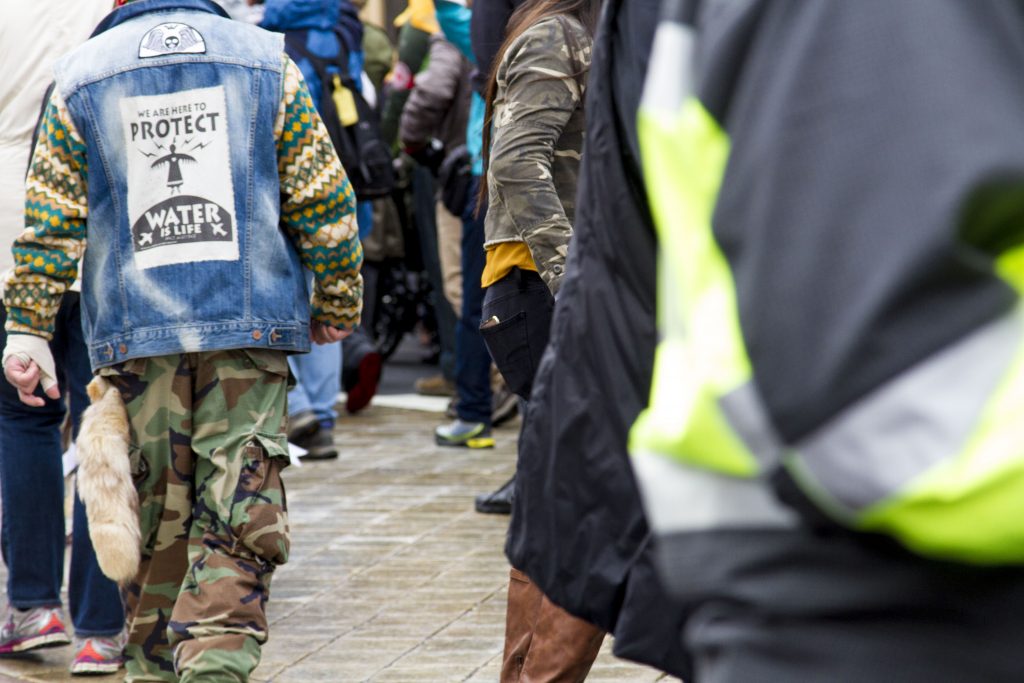 Friday’s march closed out four days of events in Washington. Native American leaders are protests at several other pipelines around the country this year. Photo by Kamaria Roberts

The march on Friday was about more than just pipelines, however.

Krissy White, 22, and Steven Thompson-Oakes, 26 –members of the Mohawk tribe who came to Friday’s event from Akwesasne, New York — said they opposed the continued contamination of water from old power plants near their reservation. According to NOAA, Alcoa and General Motors plants dumped toxic pollutants into the Grasse and St. Lawrence rivers around Akwesasne over several decades.

Thompson-Oakes said the showdown at Standing Rock encouraged him and White to fight back in their community.

“We’ve got cancer in our reservation in Akwesasne to this day, and our women can’t even breast feed because of the chemicals,” he said. “And so now, we’re just hoping we get the community support, to [say] to the government: This is your mess, you need to clean this up.”

In a speech near the White House on Friday, Standing Rock Sioux Chairman David Archambault II urged protesters to remain active even if they didn’t see immediate results.

“During the last year, people around the world have sacrificed and traveled and stood with us as Standing Rock,” Archambault said. “We face a lot of obstacles and we face a lot of setbacks, but we’re not defeated.”

Left: Hundreds of people rallied in Washington, D.C. on Friday as part of the Native Nations March. Photo by Kamaria Roberts