In 1997, Duane Edward Buck was sentenced to die after he was convicted of killing two people and wounding a third in Houston, Texas. When the jury decided to execute Buck, they weighed testimony from his own lawyer’s expert witness, a psychologist, who said Buck posed a danger to society simply because he is black.

Today, nearly 20 years later, the Supreme Court will hear oral arguments to decide whether Buck already received a fair trial, or if he needs a new one because racism played a role in sending him to death row.

Since the Supreme Court ruled in 1976 that the nation could again legally execute convicted criminals, 1,437 people have been put to death nationwide, with 98 executions in 1999 alone — the most in any one year.

Roughly as many convicted black felons await execution in the U.S. today as their white peers, despite the fact that nationally, whites greatly outnumber African-Americans. Historically, black inmates have held an outsized place on death row.

“Race and the death penalty are inextricably intertwined” throughout the United States.

Robert Dunham directs the Death Penalty Information Center, a group that advocates against capital punishment. He said psychiatric testimony often refers to defendants as monsters or animals, “injecting things that are essentially dog whistles for historical discrimination.” After years of appeals, Dunham said Buck’s case attracted the Supreme Court’s attention because the punishment “was so blatantly a product of race.”

“Race and the death penalty are inextricably intertwined” throughout the United States, Dunham said. “Duane Buck’s case is a poster child for it.”

Late on the night of July 30, 1995, Buck, then 33, forced his way into the home of his ex-girlfriend, Debra Gardner, with a rifle and shotgun, according to court documents. The couple had broken up a week earlier.

Once inside, he saw Phyllis Taylor, his step-sister. Taylor, who survived, said Buck’s eyes were bloodshot, and he was high on amphetamines. He pressed a rifle against Taylor’s chest and fired, according to court documents.

He then searched Gardner’s home where he shot and killed her friend Kenneth Butler in the hallway. Gardner ran out into the street to escape, which is where Buck found, shot and killed her. Her two children watched her die. Inside, Taylor laid bleeding on the floor and prayed.

According to Taylor, after two weeks of recovery in the hospital, she returned home and the phone rang. It was Buck. He asked if he had shot her, if he had killed two people, she said. He wept. From a jailhouse phone in Houston, he called Taylor every day, begging her to forgive him. Every time she hung up the phone, Taylor said her mind flashed back to that night. Forgiving Buck took her a long time, she said.

“This has never been an easy thing to do,” Taylor, 49, told the NewsHour. 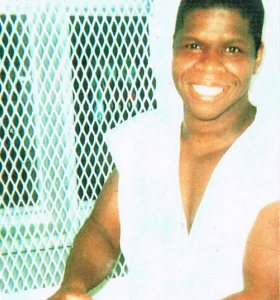 During Buck’s trial, Taylor testified. Distraught, she was asked to leave the courtroom. She’s since said she doesn’t recall much from that “very, very hard” day.

At the 1997 sentencing phase of Buck’s trial, defense attorneys Danny Easterling and Jerry Guerinot called upon psychologist Walter Quijano to testify about the risk that Buck posed to society, court documents show.

The prosecutor then asked: “You have determined that the sex factor, that a male is more violent than a female because that’s just the way it is, and that the race factor, black, increases the future dangerousness for various complicated reasons; is that correct?”

In Texas, a jury must decide whether to imprison you for life or execute you based on your perceived potential for danger. Quijano’s testimony was used to justify Buck’s execution.

In 2000, John Cornyn served as the attorney general for the state of Texas. According to Cornyn, Quijano’s racism-laced testimony compromised the trials of six people, including Duane Buck. Everyone except Buck has received new hearings.

In its 2009 decision to reject Buck’s request for a new trial, the Fifth Circuit Court of Appeals wrote that Buck’s own lawyers invited Quijano as a witness and that prosecutors “referenced the race factor only once during cross-examination and never mentioned it during closing arguments.”

“[E]ven if we were to consider the merits of Buck’s claim, we would conclude that it fails to make a substantial showing of the denial of a constitutional right,” the court wrote.

“[E]ven if we were to consider the merits of Buck’s claim, we would conclude that it fails to make a substantial showing of the denial of a constitutional right.” — Fifth Circuit Court of Appeals, 2009

Since Buck’s sentencing hearing, one of his former defense attorneys, Easterling, signed a letter, along with 102 Texas politicians, civil rights leaders and lawyers, asking the Lone Star State to give a “new, fair sentencing hearing for Duane Buck, free from racial bias.” Buck’s other former attorney, Guerinot, has not signed the letter.

Texas has executed 21 of Guerinot’s clients, the Dallas Morning News reported. Guerinot declined to be interviewed for this story.

Long-time Houston prosecutor Linda Geffin also added her name to that list. She was part of the team that took Buck to court after he commited murder. Out of a decade of trying 150 cases before a jury for Houston’s county attorney’s office, Geffin said Buck’s case was the only capital murder she tried. It is also the only case whose outcome she regretted enough to take a stand to fix.

When he was on trial, she did not hear Quijano’s testimony, Geffin said. It wasn’t until 2011, when she scrolled across word of Buck’s appeal in her Facebook newsfeed, that Geffin said “the full impact of that testimony just hit me.”

For Geffin, the case is simple: Buck shouldn’t be executed unless his punishment hearing is free from racial bias, she said.

“How often do we have the opportunity to look back and say, ‘This was wrong?’” she said. “It’s an opportunity that doesn’t come along very often. We should seize it and put energy and effort into making it right.”

Left: The U.S. Supreme Court will hear oral arguments for Buck v. Davis to determine if Duane Edward Buck received a fair trial in 1997 or if he needs to be retried because racism corrupted justice. Photo by REUTERS/Molly Riley