The Supreme Court just had a quiet term. These high-profile cases are about to change that.

Nearly every single Supreme Court term in recent memory has had at least one-headline grabbing decision.

That changed in the court’s latest term, when it kept high-profile legal disputes off the docket.

But the absence of blockbusters in the term that ended last week is setting up the court for an explosive return to the bench later this year, when justices are scheduled to hear three politically-charged cases whose outcomes could directly impact some of Washington’s most divisive debates.

One involves President Donald Trump’s revised travel ban, which the justices reinstated — temporarily, and on a limited basis — last week. The second deals with partisan gerrymandering, and whether Wisconsin should have drawn its state legislative districts differently. And the third pits a baker who refused to make a gay couple a wedding cake on religious grounds against a Colorado anti-discrimination law.

Still, even in a relatively low-key term, the court took on serious questions involving the criminal justice system and other topics. And it happened as the justices watched a federal appellate judge from Denver, Neil Gorsuch, endure a contentious confirmation process to become their newest colleague.

WHAT DID THE SUPREME COURT TACKLE?

Newly-confirmed justice Neil Gorsuch made it onto the bench in April, in time to hear arguments over whether Missouri’s state government can reject a church’s application for grant money to resurface its playground solely because it is a church.

Seven justices last week sided with the church. But below the surface, there was disagreement even among those in the majority over whether the outcome ought to be different in cases where churches are seeking government aid for religious purposes.

Every state, in some shape or form, prevents courts from questioning or revisiting verdicts because of what was said during the jury deliberations. But in March, the Supreme Court, by a 5-3 vote, carved out an exception for certain cases in which it’s clear from a juror’s statements that racial bias is part of the motivation to convict.

The month before, the justices ruled that a death row inmate in Texas should be able to seek a new sentence for the fatal shooting of his girlfriend in 1995, citing “a particularly noxious strain of racial prejudice” in testimony introduced by the inmate’s own defense attorney during the penalty phase of his trial.

At the time, a clinical psychologist called by the inmate’s defense team told the jury “black and Hispanic people are more likely to be dangerous because they are ‘over-represented’ among violent offenders.

Racial bias in the financial system

The court also said the city of Miami could proceed with lawsuits against Bank of America and Wells Fargo, which allege the financial institutions targeted African-American and Latino residents with predatory loans.

“It’s a really critical case,” said Marcia Coyle, the chief Washington correspondent for The National Law Journal and a Supreme Court analyst for the NewsHour. “Especially when we went through the very deep recession we did because of how banks were making predatory loans. A lot of cities were suffering as a result.” 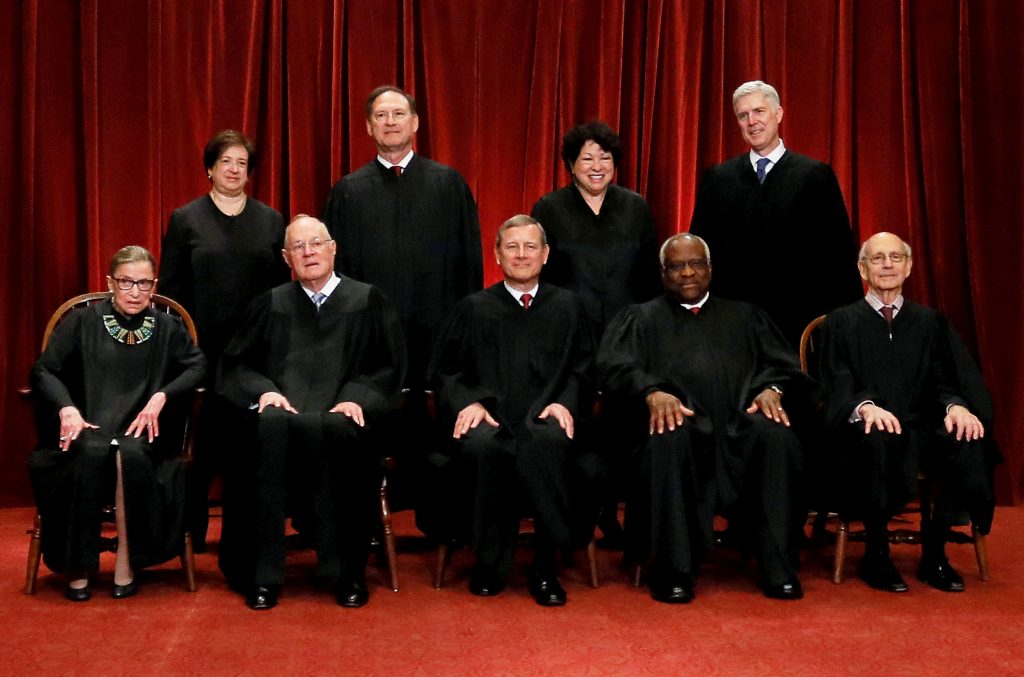 The Supreme Court’s justices posed for a new group photograph at the Supreme Court building in Washington, D.C., on June 1, 2017. Neil Gorsuch, the newest justice, is standing on the far right. File photo by REUTERS/Jonathan Ernst

Earlier this year, federal courts in Hawaii and Maryland blocked Mr. Trump’s revised travel ban before it could take effect, but the Supreme Court weighed in last week, mere moments before closing out its term. It said it would allow the Trump administration to enforce the ban, at least temporarily, against some of the people it originally targeted: foreign nationals, without green cards, from Iran, Libya, Somalia, Sudan, Syria and Yemen.

In January, the administration began enforcing an earlier version of the ban without advance notice, sparking chaotic scenes at airports across the country. Legal challenges from several states successfully blocked that version, and Trump later rescinded it.

What about the new guy?

Gorsuch has been on the job now for just more than two months. So far, he’s authored one majority opinion, in a case that was not controversial. (It was for a unanimous court decision, in a dispute over the Fair Debt Collection Practices Act.)

So, how conservative is he? It’s hard to say much about Gorsuch’s judicial philosophy from one majority opinion. But more can be gleaned from looking at the concurring and dissenting opinions he’s written, and the opinions he’s signed on to.

READ MORE: What we know — and don’t — about Neil Gorsuch’s judicial philosophy

“In some of the dissents and concurrences, he showed he was pretty much in line with Justice [Clarence] Thomas’ thinking, in those cases,” Coyle told NewsHour. And indeed, in rulings this week on the church playground case and the travel ban cases, Gorsuch signed onto concurring opinions that Thomas penned.

“It’s still very early, you really can’t put a label on how conservative he is or will be in certain areas of the law,” Coyle continued. “But it showed that his conservative inclinations are pretty strong right now.”

WHAT’S ON DECK NEXT TERM?

The court will confront the travel ban case again, likely hearing arguments in October, as it tries to resolve once and for all whether the revised travel ban is legal.

But it’s not the only blockbuster case that’s already teed up. Here’s what to watch:

A case out of Colorado highlights one of the new fronts in the debate over LGBT rights, two years after the Supreme Court legalized same-sex marriage.

On one side is a Colorado baker who, for religious reasons, objected to serving a gay couple who visited his bakery in 2012 in search of a wedding cake. On the other side is the couple, backed up by a state agency trying to use Colorado’s anti-discrimination law to compel the baker to serve same-sex couples in the future.

The last court to rule on the dispute was the Colorado Court of Appeals, which sided with the couple in August 2015.

Justices will take on a case that looks at partisan gerrymandering and the constitutionality of the legislative map drawn in 2011 by Wisconsin’s Republican-controlled legislature.

A three-judge panel at the federal district court in Madison struck down the map last November, saying that it went too far in trying to keep Republicans in power. The lawyers defending the map have said it was the first time in more than three decades that any federal court struck down a redistricting map because of illegal partisan gerrymandering.

This story has been updated to indicate Gorsuch signed onto concurring opinions that Thomas penned.