WASHINGTON — Justice Antonin Scalia’s sudden death transformed the Supreme Court’s term, shifted power to its liberal wing and started a transition that will be greatly affected by who wins the presidency.

It was a term unusual in other ways, too. Justice Clarence Thomas broke a 10-year silence following his good friend’s death to ask questions during an oral argument. Senate Republicans shunned any action on President Barack Obama’s nominee to restore the court to its full nine-member strength. And four cases ended in 4-4 ties.

Major decisions underscoring abortion rights and constraining corruption prosecutions of public officials would have come out the same way had Scalia remained on the court. But his death led directly to an unexpected majority to uphold race-conscious college admissions policies. Another major goal of conservatives, to rein in the power of labor unions, was unattainable at the court without Scalia.

Chief Justice John Roberts was among several justices who said they spent more time searching for common ground after the loss of their larger-than-life colleague. The court produced a raft of decisions with little or no dissent that also did not result in major changes to the law. Justice Ruth Bader Ginsburg remarked that eight was not a good number for a group that is used to being nine.

“The Supreme Court term that ended yesterday was more liberal than many had predicted and stranger than anyone could have anticipated,” Steven Shapiro, the American Civil Liberties Union’s national legal director, said Tuesday.

Scalia’s empty chair remained in the courtroom for a month beyond his death, through ceremonies at the court and the pageantry and solemnity of his funeral Mass at the Basilica of the National Shrine of the Immaculate Conception in Washington. When the court eventually removed the chair from the bench, it symbolized the loss of a fifth, majority-making vote for conservatives on cases that split the court along ideological lines.

Before late June, Justice Samuel Alito had only once in a decade on the court read his dissent from the bench, a practice generally reserved for important cases about which a justice feels strongly.

Alito announced his dissents in the affirmative action and abortion cases on the last two days the justices met to issue decisions. Both times, Justice Anthony Kennedy joined with the more liberal justices to form a majority.

Alito’s upset with the outcome of cases continued even as the court issued a final set of orders on Tuesday. He wrote a stinging 15-page dissent to an order denying a religious liberty claim from pharmacists in Washington state who object to having to dispense emergency contraception.

“If this is a sign of how religious liberty claims will be treated in the years ahead, those who value religious freedom have cause for great concern,” he wrote. 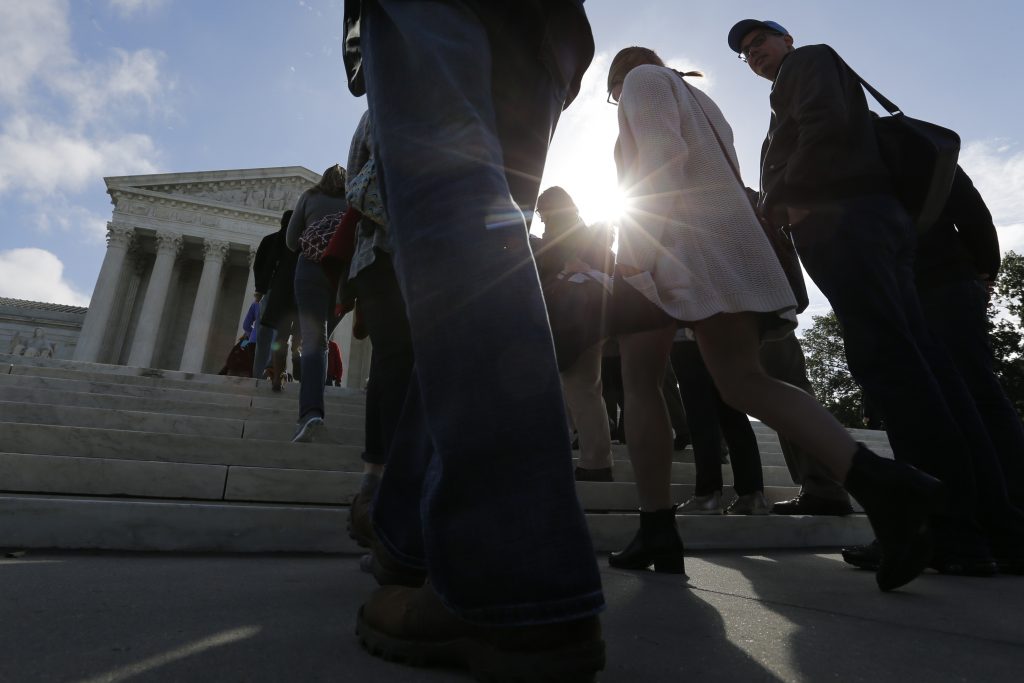 People wait in line in to be allowed in to watch arguments at the U.S. Supreme Court building on the first day of the court’s new term in Washington, D.C. Photo by Jonathan Ernst/Reuters

Operating with eight justices, the court was unable to decide four cases at all, including a test of Obama’s plan to help millions of people living in the United States illegally and a challenge to the finances of public-sector labor unions. Both cases would have been decisive conservative victories, even as the tie over immigration effectively killed the president’s plan.

In one other case, involving the Obama health care law, the justices produced a unanimous opinion that decided nothing. The case dealt with religious objections to the law’s requirement that women covered by employer health plans have access to cost-free birth control. The justices ordered lower courts around the country to search for a compromise that would address the objections without impeding access to contraception.

The Senate’s refusal to act on Obama’s nomination of Judge Merrick Garland only heightens the role the presidential and congressional elections will play in determining the composition of the court. Scalia’s seat is the first of several that probably will come open in the next few years. Ginsburg is 83, Kennedy will turn 80 next month and Justice Stephen Breyer’s 78th birthday is in August. Thomas, who was 43 when he joined the court, will turn 70 during the next president’s term.

Shapiro said the just-ended term might have marked “the end of an era.” But at least until a ninth justice is confirmed, and as the term’s biggest cases showed, Kennedy remains the court’s pivotal vote. His majority opinion for a divided court in the University of Texas admissions case was the first time he’d voted to uphold an affirmative action plan in 28 years on the court.

He offered a final nod to Scalia, noting that his opinion relied in part on an earlier opinion “authored by our late colleague, Justice Scalia.”

Left: A notice is seen on a lectern, which faces the bench and where lawyers stand to argue, in the courtroom of the U.S. Supreme Court in Washington, D.C. Photo by Jonathan Ernst/Reuters