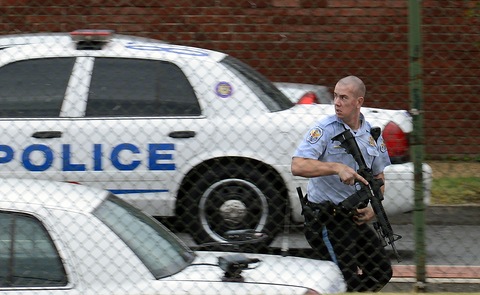 Crime rates had been declining since 1993, with an uptick in 2006 the only exception. Photo of a Washington, D.C., police officer by Getty images

WASHINGTON — The violent crime rate went up 15 percent last year, and the property crime rate rose 12 percent, the government said Thursday, signs that the nation may be seeing the last of the substantial declines in crime of the past two decades.

Last year marked the second year in a row for increases in the crime victimization survey, a report that is based on household interviews.

The 2012 increases were driven by a rise in crimes that were not reported to police, a category frequently involving less-serious offenses. Simple assaults also rose. The rate of property crimes increased due to a rise in theft.
“One year of bad news is something you notice but don’t necessarily draw conclusions about. Two years of bad news suggests it might be time to start worrying,” said Carnegie Mellon University professor Jonathan Caulkins.

University of Maryland criminology professor James Lynch said the crime victimization survey, combined with a separate report recently issued by the FBI, suggests that the 20-year trend of dropping crime rates may be approaching an end.

“You’re getting more evidence that this is a change in the trend,” said Lynch, a former director of the U.S. Bureau of Justice Statistics, the agency that issued Thursday’s findings.

“It’s clear that crime levels have reached what seems to be the bottom in terms of the declines in the 1990s and 2000s,” said Northeastern University criminology professor James Alan Fox.

The goal for law enforcement authorities from here on out, say criminologists, is keeping crime levels at their current low levels.

The victims survey is an attempt to capture crime trends more fully than the FBI’s yardstick.

Lynch, the former Bureau of Justice Statistics head, said the increases in the crime victimization survey sound significant, but he pointed out that crime rates have been going down for so long and are now so low that even a small increase in violent victimization becomes a large percentage change.