This teen inventor hopes to steer distracted drivers to safety

T.J. Evarts’ brainchild began as an amalgam of aluminum and circuits.

A young teenager interested in robotics, Evarts noticed how easily some of his friends became distracted as they learned how to drive. The observation would lead him on a quest to change how new motorists function on the road.

Now 20, Evarts’ creation, the SMARTwheel (SMART for Safe Motorists Alert for Restricting Texting) is nearly ready to hit the market. The long-planned invention has evolved into a structured system of portable sensors that can be fastened to the steering wheel of most vehicles.

“It came from aluminum and coat hangers to a flexible circuit board,” Evarts said. “The concept has been around a little bit but it’s really been limited to small sensors. We had to make our own.”

Evarts said the technology tracks the placement of a driver’s hands on a steering wheel, an indicator of how focused the driver’s attention is on the road.

Moving one or both hands off the wheel for more than four seconds will cause a blinking red light to appear on the SMARTwheel along with a ringing noise to signal the driver, while the data accumulated through the process can be sent to a parent’s app linked by Bluetooth.

Evarts sees the invention as a way to ease parents’ concerns when their children start commandeering vehicles on their own, and help to limit the bevy of distractions routinely challenging drivers, a problem that has only grown worse with mobile technology. 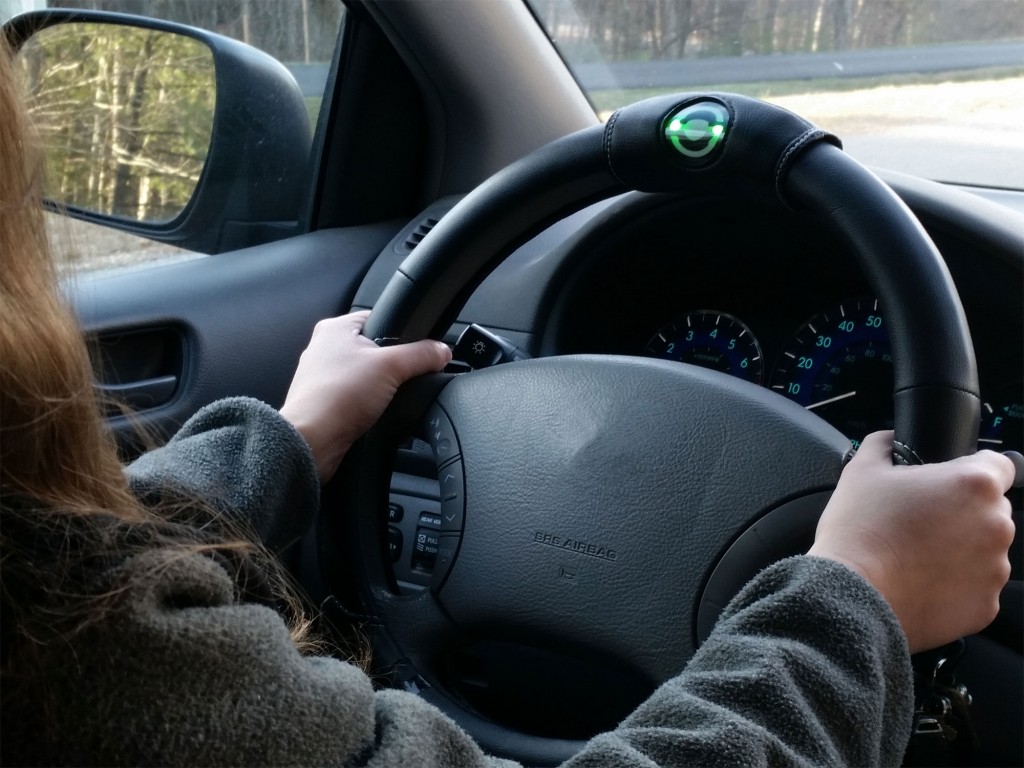 Moving one or both hand off the wheel for more than four seconds will cause a blinking red light to appear on the SMARTwheel along with a ringing noise to signal the driver, while the data accumulated through the process can be sent to a parent’s app linked by Bluetooth. Photo courtesy of SMARTwheel.

A driver’s attention can be diverted from the road by a variety of activities, but for those in their teens and 20s, texting is a particularly stubborn problem — and a worrying cause of accidents.

The U.S. Department of Motor Vehicles says nine people die each day because of distracted driving, also pointing to studies that say reading a text message on the road takes an average of five seconds, a factor in the design of the SMARTwheel, which has a four-second alert.

Federal data and independent studies show distracted driving is an issue that continues to persist across the country.

After a 15-year period during which traffic deaths declined in the United States, a NHTS report released on Friday estimates road fatalities rose during the first nine months of 2015, an increase of nearly 10 percent over the previous year.

The U.S. Department of Motor Vehicles says nine people die each day because of distracted driving.

More than 26,000 people died on the road during the time period and 94 percent of the deaths could be attributed to human error like drunken driving and texting while driving, the report noted.

A 2009 Pew Research Center study shows 40 percent of those surveyed said they have been in a vehicle when a driver used a cell phone in a dangerous way, while about a third of teenagers ages 16 and 17 admitted to texting while driving.

In 2013, more than 3,100 people were killed in vehicles because of distracted driving and 421,000 were injured, according to the Federal Communications Commission.

About 10 percent of drivers under the age of 20 involved in fatal accidents are distracted when those incidents take place – the largest portion of drivers who fell into this category, according to data collected by the U.S. Department of Transportation’s National Highway Traffic Safety Administration (NHTS).

Another 27 percent of drivers in their 20s who make up fatal crashes were also found to be distracted when driving. 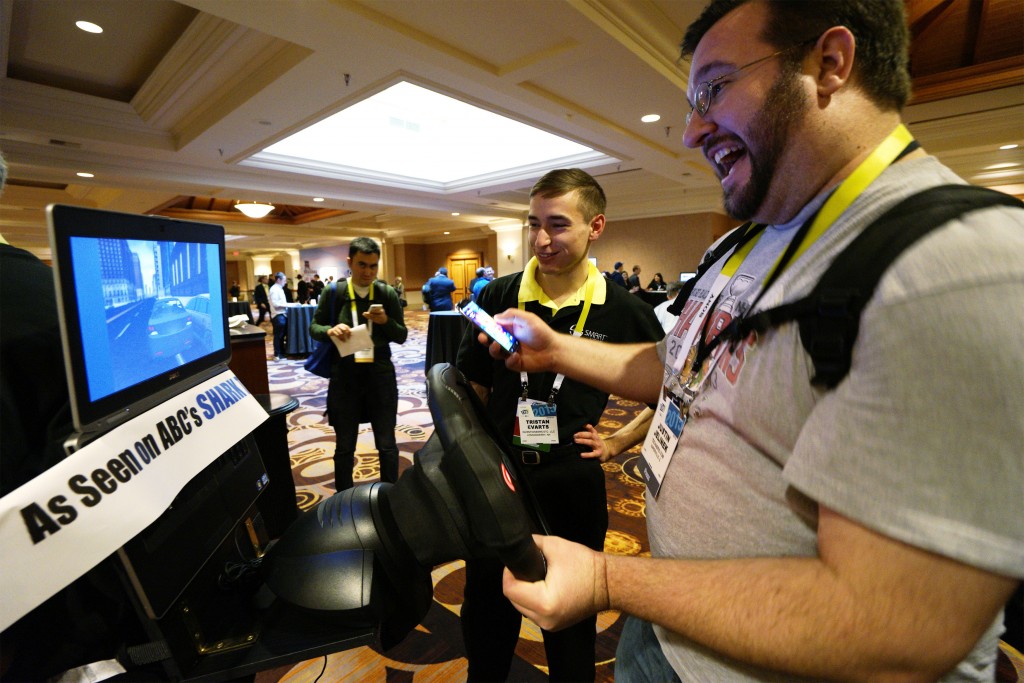 T.J.  Evarts (L), inventor of the SMARTwheel, demonstrates his product to Justin Jelinek last year at the International Consumer Electronics show (CES) in Las Vegas, Nevada. The SMARTwheel is a steering wheel cover with sensors to prevent distracted driving. Photo by Rick Wilking/Reuters

Evarts’ invention aims to change these statistics, and hopes to initially appeal to the parents of teenage drivers.

The CEO said his company is also installing a reward system into the app that will grade drivers’ performances and identify ways to improve their driving.

“Our goal is to create teachable moments,” Evarts said. “What type of distractions do they trend for? It can also detect general trends.”

After a visit to the White House and a 2013 appearance on the ABC television show “Shark Tank,” the New Hampshire native created waves of interest this year at the Consumer Electronics Show in Las Vegas.

Eliminating texting while driving is not a novel concept, with a flurry of options to address the issue now out on the market. Evarts said his product differs because it looks at a driver’s behavior while it is happening.

“Before it’s only been the results of driving like hard-braking and swerving,” he said. “We’re able to tell how the drivers drive.”

Left: T.J. Evarts, who turned 20 last year, is nearly ready to release the SMARTwheel, an invention he has been working on since his early teens and one that he believes may change the habits of distracted drivers.Photo courtesy of SMARTwheel