Editor’s Note: A year ago last Friday, Chapman University professor Terry Burnham, formerly of Goldman Sachs and Harvard Business School, presented his vision for a spectacular economic bust. He foresaw the Dow hitting 5,000 before it hit 20,000. We’ve since called it his “Dow 5,000 prediction.” A year later, as the Dow closes above 17,000, he’s sticking by that prediction.

Most famous for his books “Mean Genes” and “Mean Markets and Lizard Brains,” Burnham believes that our “lizard brains” blind us to the signs of collapse. (He explored the concept in a segment with Paul Solman, which you can watch at the bottom of this post.)

Burnham is a long-time market skeptic and critic of the Federal Reserve, comparing America’s dependence on printed money to the Stockholm Syndrome on this page and urging readers to withdraw money from banks. He’s updated us on his prediction since last July, but now that he’s hit the one-year mark, Burnham wanted to deliver a more complete scorecard of where we’ve been, where we are now, and where we’re going.

The Fed has been keeping interest rates at rock bottom lows to supposedly stimulate the economy… The idea that the Fed can save the economy is simply ridiculous. … What about fiscal policy? Can we deficit spend our way to prosperity? This is also ridiculous. Our problem is that we have overspent. If you had a problem of drinking 50 cups of coffee a day, would the solution be to drink 80 cups a day for a while? …

Stocks will decline … I’m not predicting what will happen today, or in the next week or month. I don’t pretend to know the timing. I only think that I see the inevitable.

One year later, we revisit the macroeconomic policies and the impact on jobs and profits, and check in on the Dow Jones Industrial Average. In addition, we develop a scorecard to revisit periodically as the government attempts to end the unusual macroeconomic policy environment.

In the last year, the Federal Reserve has continued an extremely loose monetary policy, and the U.S. federal government has added large amounts of debt. The stated goal of these policies is to stimulate the economy. 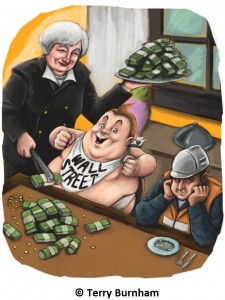 While macroeconomic policy remains extremely loose, any positive impact on the real economy has been modest. Over the last year, U.S. corporate profits and average real wages have declined. The good news is that there has been an increase in the total number of jobs and, consequently, in total wages.

While wages and profits have responded modestly, or not at all, to the extreme macroeconomic policy environment, the stock market has continued its powerful rise. In short, Wall Street parties while Main Street struggles.

We continue to live in an historic macroeconomic environment. All three of the main “stimulative” policies continue at near all-time high rates.

Left: Terry Burnham remains confident the bubble will burst and that Dow 5,000 is more likely than Dow 20,000. Photo by Flickr user ecstaticist.