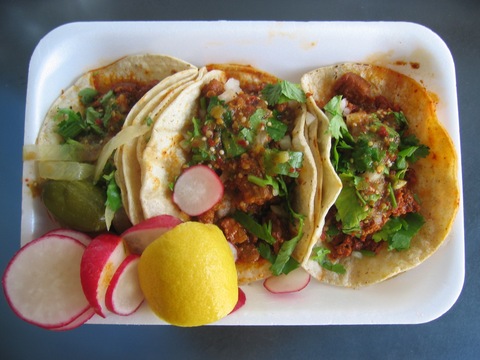 Fronteras: The Changing America Desk reporters investigate the transformation of the taco in the Southwest — from cheap street eats to gourmet delights, from a Mexican mainstay to an breakfast staple.

Consider the taco. A corn or flour tortilla filled with something tasty. It’s a simple concept, but the possibilities are infinite.

As Americans have taken to the taco, this culinary import has been adopted, adapted and transformed north of the border. Video by Katie Euphrat / KPBS

In San Antonio, Texas, the Datapoint Taqueria is a white food wagon that each night gets unhitched and dropped off on Datapoint Drive. They serve up traditional Mexican taco plates, very similar to what you can find anywhere in Mexico — tacos pastor, barbacoa, carnitas. You have to pay in cash. The foodie website urbanspoon.com gives the taqueria an adoring 92 percent score. 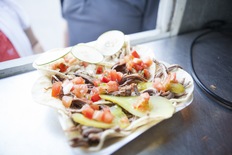 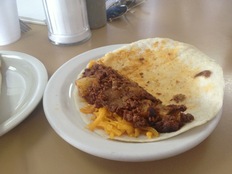 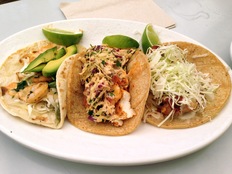 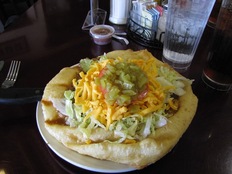 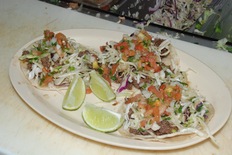 Raj and Tanzima are a married couple from Bangladesh and had heard how good the tacos are here.

“So this is the first time that we came here. And she tried it a couple of times,” Raj said.

Tanzima chimed in, “I just came with one of my friends, she is very fond on tacos, and when I first came I was impressed.”

But travel two blocks up the street to Taco Bell and the taco experience is very different. This is where they make a Mexican-food-like-substance from Cool Ranch-flavored Doritos taco shells.

Taco Bell is pushing the limit of what defines Mexican food in this country, and forcing the question: Is the taco evolving in America, or mutating?

Whatever the answer, Americans are eating it up, including the fast food restaurant’s newest creation now being rolled out in limited test markets: the breakfast waffle taco.

Steve Zaragoza is a Los Angeles-based video blogger. He went in search of the breakfast waffle taco, saying he’s “dying to get my fat hands on it.”

“The waffle is buttery, it’s crispy,” he said in a video post. “It doesn’t taste like a frozen Eggo waffle.”

Between Taco Bell and the Datapoint Taqueria there’s a vast spectrum of taco. Somewhere in the middle is Taco Cabana, a 24-hour Mexican food chain that started in San Antonio 35 years ago. It now has 166 locations in four states and is still growing.

“Customers come here about 20 at a time,” he said. “They fill out a questionnaire and they try the products. It can be a burrito, it can be enchiladas, it can be whatever new product we are developing. They come in and test it.”

On the wall of the test kitchen are product posters of some of their hits, like the Fajita Norteño Taco. It is one of the ideas Galicia found during his frequent explorations of Mexico where he searches for new ideas and the latest tacos trends.

“People think it’s kind of stagnant and there’s nothing more to discover, but there’s always something going on with it,” he said. “New peppers, new salsas, a new cooking style and techniques. And we go to Mexico as often as we can. We bring that back and then we work it here in a way that’s acceptable for our customers.”

Galicia is looking for the taco sweet spot: a taco with Mexican street cred that can be marketed to “gringa” soccer moms who have never been south of their hometown’s Cesar Chavez Boulevard.

But some here in San Antonio are also taking the taco uptown. Take Elizabeth Johnson, a Latin Cuisine Specialist at the Culinary Institute of America. Johnson also develops items for the menu at NAO, a CIA Latin restaurant in San Antonio.

She said we are seeing a “tacofication” of foods. With all kinds of ethnic foods merging with tacos, such as Korean Barbeque, Chinese dim-sun, Polish sausage and the Belgian waffle. She explained this is happening because the United States is changing, especially the younger generation.

“Millennials are very multi-ethnic,” Johnson said. “They are very interested in cuisine from around the world. And we are becoming more and more casual.”

And Johnson said the tacos are telling us something.

So the next time you pick up a taco from a fast food window or from a street vender ask yourself: What story is that taco telling you?