Water is becoming a scarce resource in many parts of the world. Water tables have been falling in many regions for decades, particularly in areas with intensive agriculture. Wells are going dry and there are few long-term solutions available — a common stopgap has been to drill deeper wells.

This is exactly what happened in California’s Central Valley. The recent drought there prompted drilling of deeper and deeper water wells to support irrigated agriculture.

Arizona is also looking to drill additional wells to tackle water shortages to support agriculture. The flow of the Colorado River, which supplies water to more than 44 million people across seven states, including Arizona, has dropped by close to 20 per cent in the past 15 years, lowering water levels in Lake Mead, the river’s largest reservoir.

Under Arizona’s proposed Drought Contingency Plan, the state will have to reduce its use of Colorado River water by about 500 million cubic metres per year, an amount equal to three times Calgary’s annual water consumption.

The water surface elevation of Lake Mead has dropped about 15 metres from its highest level, revealing a white ring of mineral deposits on its walls. Photo By Wayne Hsieh/Flickr via Creative Commons

Groundwater supplies around the world are being threatened by excessive pumping, but drilling deeper wells is not a long-term solution. There is a limit to the availability of fresh groundwater at depth. A better solution is to manage water use and avoid excessive declines in groundwater levels.

Drilling deeper wells to support irrigated agriculture may not be possible everywhere. Recent research indicates the depths at which fresh groundwater resources occur is highly variable and not as extensive as previously thought.

Irrigation for agriculture is currently uncommon in the Canadian Prairies, but this could change over the coming decades. Water scarcity in the southern U.S. High Plains combined with climate change could lead to changes in agricultural practices in Canada. As the corn belt shifts north, the demand for water will increase. 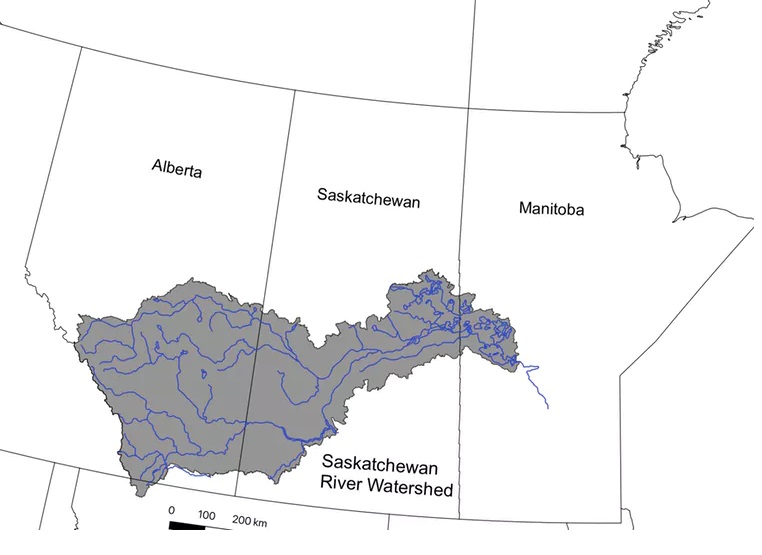 The Saskatchewan River watershed extends over much of the agricultural land in the Canadian Prairies. Photo By The Conversation

Water in the Saskatchewan River watershed is already close to fully allocated in some areas. Steamflow in the headwaters of the Saskatchewan River has decreased during the growing season, as glaciers and snowpacks in the Rocky Mountains melt and shrink. Groundwater demand is likely to increase to address shortfalls in water from surface water sources.

Widespread groundwater depletion has not been noted in Canada, in part because of low demand from groundwater to date. It is not clear what level of groundwater pumping would be sustainable.

Examining this issue ahead of widespread development of groundwater resources due to growing population and changes in agriculture is key to avoiding the widespread depletion problems seen in other regions.

Canada has, however, seen issues with groundwater quality.

In the Canadian Prairies, these issues are often related to oil and gas development and agricultural practices. Saskatchewan has documented nearly 20,000 surface spills of hydrocarbons and waters from oil fields since 2005. Migration of these contaminants and others, notably nitrates from agriculture, to the water table decreases groundwater quality. 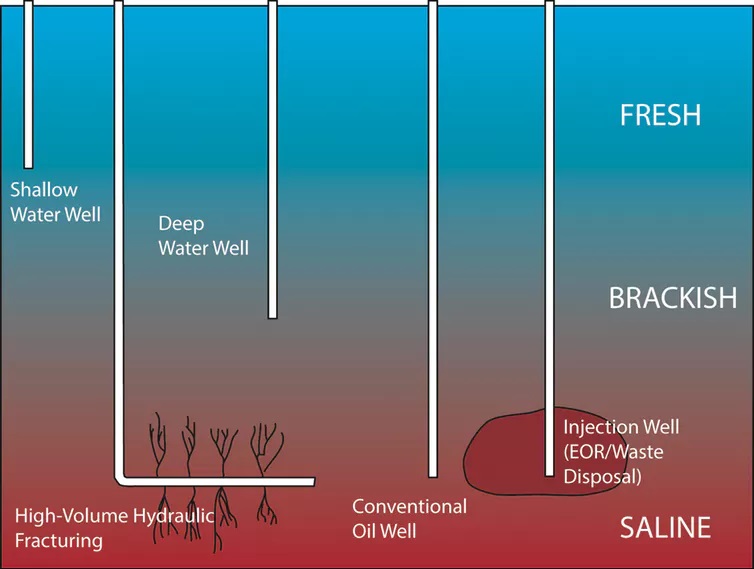 Groundwater resources are threatened from the bottom up by the oil and gas industry. Image By The Conversation

These activities could be creating conditions that would allow for migration of hydrocarbons, saline waters and other contaminants upwards into groundwater supplies that might otherwise be suitable for agriculture and drinking water supplies.

The impacts from the oil and gas industry on water chemistry have not been studied in detail at the regional scale. Most of THE studies that have been done relied on data submitted when wells were initially drilled, meaning that we’re unable to track changes in water chemistry over time.

Studies that do examine changes in water chemistry over time and the potential migration of contaminants into potable water supplies are rare, mainly due to a lack of reporting requirements for water chemistry and injected fluids, along with sparse monitoring networks.

Groundwater may play a large role in meeting the water needs of Western Canada over the coming century. Understanding how extensive this resource is and developing better management strategies is urgently needed.

Left: A worker makes his way through the water after setting up an irrigation system on an agricultural field, near Calexico, California, U.S. October 7, 2016. Photo By Mike Blake /Reuters

Grant Ferguson is an associate professor at the University of Saskatchewan.

Jennifer C. McIntosh is a professor at the University of Arizona.