The kid who was coding before it was cool

Editor’s Note: Computer coding — it’s the skill in demand in seemingly all professions these days. But back before Mark Zuckerburg and Bill Gates were household names, knowing programming languages wasn’t such a big deal. Nor was it considered a viable career. Avi Flombaum knows that firsthand. He’s the co-founder and dean of the Flatiron School, a 12-week coding program that requires no experience or prerequisites — 10 percent of their students don’t have college degrees. 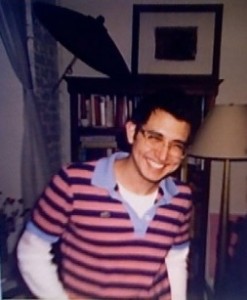 Much to the chagrin of his parents, Flombaum taught himself how to code as a kid instead of pursuing the lawyer or doctor track. He started Flatiron because he doesn’t think people should have to struggle on their own to master coding. As he says, “You might as well immediately be learning it in the manner in which you’re going to be practicing it, which is going to be through collaboration.”

In this edited transcript of his extended conversation with Paul Solman, below, Flombaum recounts how he first got into coding and how he’s dealt with his very skeptical parents.

PS: How did you get into coding?

AF: My mom was a teacher in an elementary school and after school she would tutor her students. And I would have to wait for her for two hours. It was like 1993. My school had one computer and I’d basically play with that computer while my mom was tutoring students. It had this game on it called Nibbles where you’re a snake and you’re eating blocks and the snake grows bigger and you can’t crash into yourself.

Eventually, I got so good at that game that I could just beat it every time. So I opened up the source code to try to make the game harder, to try to make it move faster. So that’s the first time I had programmed. And then a year and a half later the world-wide web came out and I signed onto the Internet for the first time. I saw a web page and I really thought to myself, “This is going to change the world and this is what I want to do with my life. I want to build this Internet thing.”

AF: So I started teaching myself HTML and CSS around fifth grade, in 1995. And then, in 1998, I made a website for my community center, the Riverdale Y, and then throughout high school I was always kind of coding and doing anything I could to explore this field. When I was 16, I got an internship at a startup called Cityfeet.com and started programming for them.

PS: What did they do?

“Most of the interviews I went to, they laughed at me and thought it was really cute but they were like look, ‘I’m sorry, but this is like a real job and we can’t hire you.'”

AF: They’re a commercial real estate service. It was really early on in the Internet — maybe 2000. My parents wanted to send me to SAT camp for the summer, and I really did not want to go, so I made a deal with them. I told them I would get a summer job programming. And if I got that job, I wouldn’t do SAT camp. They challenged my bet because they thought, “Who hires a 16-year-old kid?” My parents were like, “OK, if you don’t have a job by July 1, you have to enroll in this SAT camp.” So I started applying for jobs in the New York Times want ads and anything that mentioned computers, I would apply. I made a resumé because that’s what people did to apply to jobs.

Most of the interviews I went to, they laughed at me and thought it was really cute but they were like look, “I’m sorry, but this is like a real job and we can’t hire you.” But I eventually found this startup that also laughed at me but was like, “Listen, can you actually program?” And I was like, “Yeah.” And they gave me a test and I passed it and they said they’d pay me $10 an hour to code over the summer.

STUDENT VOICES FROM THE NEWSHOUR

So I went home, I told my parents and they were like, “You’re lying. We don’t believe you.” And I was like, “No, I have to go to work tomorrow. This is not a lie.” And they came with me to work the next day to this startup and walked in and met the CEO and said, “So this is the real thing – you actually hired my son for the summer.”

PS: Did you have a relationship with your parents where they wouldn’t believe you if you told them?

AF: I had that relationship with my parents…[but] also, the idea of being a programmer – that wasn’t really a job that you just could get. You didn’t have Mark Zuckerburgs or Bill Gateses then — world-famous, so that people understood, “Oh, you can be a self-taught programmer and be employable.”

PS: So they really thought you were making it up as a dodge for getting out of SAT camp?

AF: Yeah. It even happened again when I was in college in my sophomore year: I [was recruited] by a hedge fund, and they told me to drop out and just go and work there as a programmer. And I told my parents that and they were like: “No, we are not approving this until we actually see this office.” And they came to the hedge fund and they thought I’d set up this whole office. They were opening drawers, looking at people’s…

AF: I swear. They were knocking on walls to make sure I didn’t set up this whole ruse to convince them to let me drop out of college.

PS: You must have had a reputation as a devious son.

AF: I got into some trouble when I was growing up, sure. But you know, it was tough. There was no history of what startups are now, entrepreneurs or programming. Where I grew up they basically thought there were three jobs: you could be a baker or a lawyer or a doctor.

AF: Yeah, no, they weren’t encouraging that. Although my brother did become a college professor to their regret. My sister – she turned out alright. She’s lawyer.

So I told them that was what I wanted to do. I wanted to be an entrepreneur, and they didn’t think that was a real thing. So now, maybe after this, you can call them and tell them that I’m doing OK.

PS: They’ll see it on TV. Really, it’s fine, he seems to be doing very well.

You can see Flombaum on TV for yourself on Making Sen$e Thursday below.

Left: Avi Flombaum, co-founder and dean of the Flatiron School, started teaching himself HTML and CSS when he was in fifth grade in 1995. Photo by zokara/E+ via Getty Images.