The things they left behind

Eleanor Wimbish leaves something for Spanky every single year. 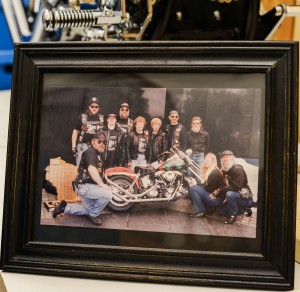 The motorcycle was made in honor of the 37 POW/MIA’s from Wisconsin to be brought to the Vietnam Veterans Memorial. (Photo by Ariel Min/PBS NewsHour)

Wimbish is not the only one who regularly visits the Vietnam Veterans Memorial in Washington, D.C., to leave items of remembrance. Ever since the construction of the memorial began in 1982, the public have been leaving items. The memorial was completed in 1984.

Now, the act of leaving something is a familiar occurrence with people leaving everything from letters, flowers, flags and toys, to uniform parts, patches, medals and craft projects from schools and PTSD groups all around the country. One group of veterans even left a motorcycle as a remembrance to the fallen soldiers with whom they served. 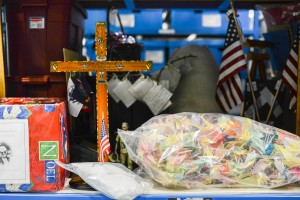 Items picked up at the Vietnam Veterans Memorial are housed at the National Park Service Museum Resource Center in Landover, Md. Photo by Ariel Min/PBS NewsHour

All of these things don’t get thrown away at the end of the day. In fact, almost everything is stored safely in the National Park Service Museum Resource Center unless it’s perishable. Museum technicians and curators look after these items after going through a process of isolating and cataloging them. 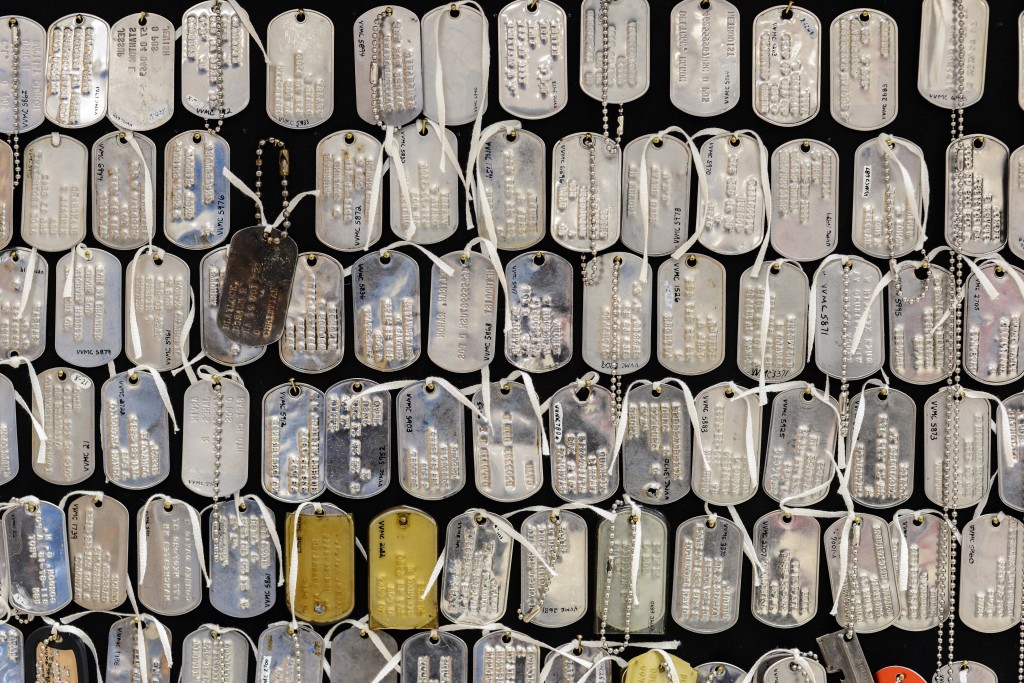 A collection of dog tags left at the Vietnam wall are displayed at the center. Photo by Ariel Min/PBS NewsHour

“It really is a very unique collection — and a vast majority of these items are left anonymously,” said director Bob Sonderman, who oversees all the preservation and cataloging of millions of items in the entire facility. 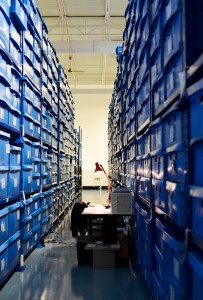 According to Sonderman, the Museum Resource Center currently houses more than 2 million artifacts from National Park Service sites in the District of Columbia, Virginia, Maryland and West Virginia. From the Vietnam Veterans Memorial alone, it has more than 500,000 items collected and catalogued in the storage facility. The Museum Resource Center is also a temporary home to artifacts from Ellis Island, moved after Hurricane Sandy hit last year.

The Vietnam Veterans Memorial Fund, in partnership with Ralph Appelbaum Associates, is currently working and raising funds to build The Education Center at the Wall, which would include a display of individual portraits of more than 58,000 veterans whose names are engraved on the memorial, reflection areas, timeline display and a long, winded path that would showcase many of the personal items that are currently stored at the center. 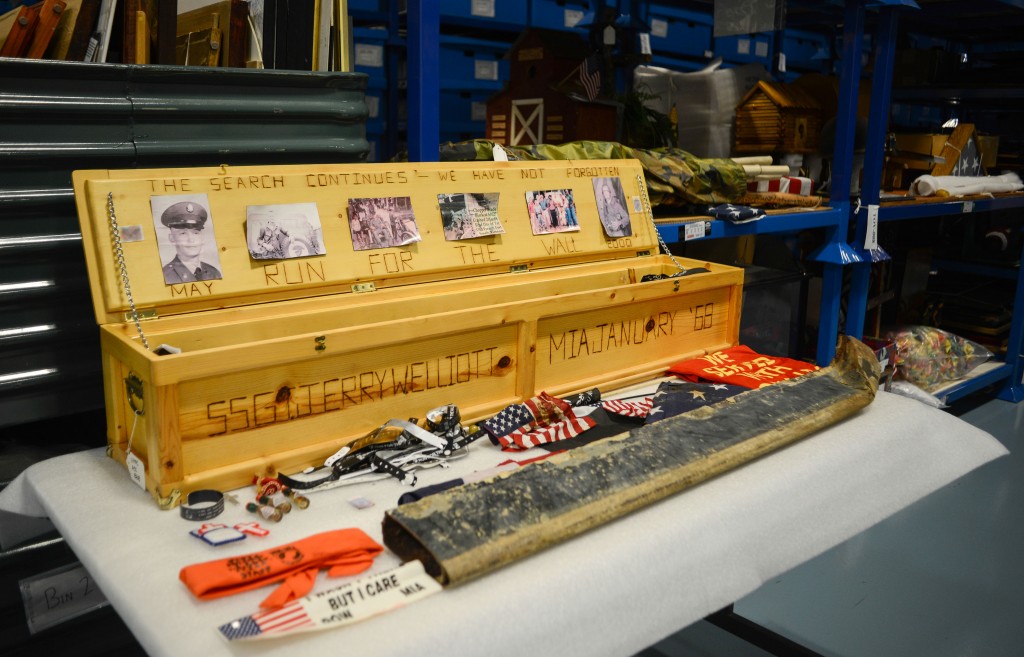 Donna Elliott traveled to Vietnam in 1999 to search for the remains of her brother, Jerry Elliott, who was classified as missing in action on Jan. 21, 1968. She did not find his bones, but she did recover a piece of a helicopter rotor blade from the crash that Jerry was killed in. Elliot left the blade, pictured in the foreground, plus photos and remembrances of her brother at the wall. Photo by Ariel Min/PBS NewsHour

The Education Center at the Wall is tentatively projected to open in 2016. Until then, the technicians are custodians of the items.

“Our job is to maintain the integrity of these items whether they’d be displayed or not,” said Janet Donlin, one of the museum technicians who specializes in the Vietnam Veterans Memorial collection. 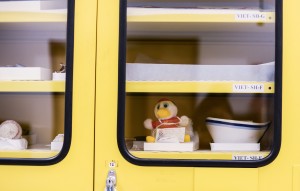 Nearly all items are stored safely in the National Park Service Museum Resource Center save for perishables. Photo by Ariel Min/PBS NewsHour

Donlin said she tries to read most of the letters and notes, and she often finds personal and untold stories of Vietnam war veterans and their families and friends.

“We didn’t know who Spanky, or who Spanky’s mom was, until a few years ago,” said Sonderman, “one day, she left a note with her full name for the first time — after about a decade.” 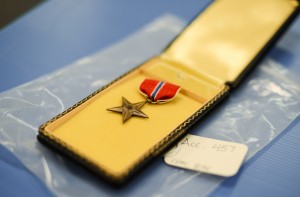 A Bronze Star, the fourth-highest award for bravery, heroism or meritorious service, was collected from the Vietnam memorial and is now housed at the National Park Service Museum Resource Center. Photo by Ariel Min/PBS NewsHour

Two years ago, Eleanor Wimbish, who was then well into her mid-80s, was invited to the Museum Resource Center with many of her extended family members. And for her visit, the staff at the center displayed everything that they had collected from her for more than a decade.

“She brought all of her grandchildren, and they were just looking at everything,” said Sonderman. “And it was such a remarkable experience for them and for us.” 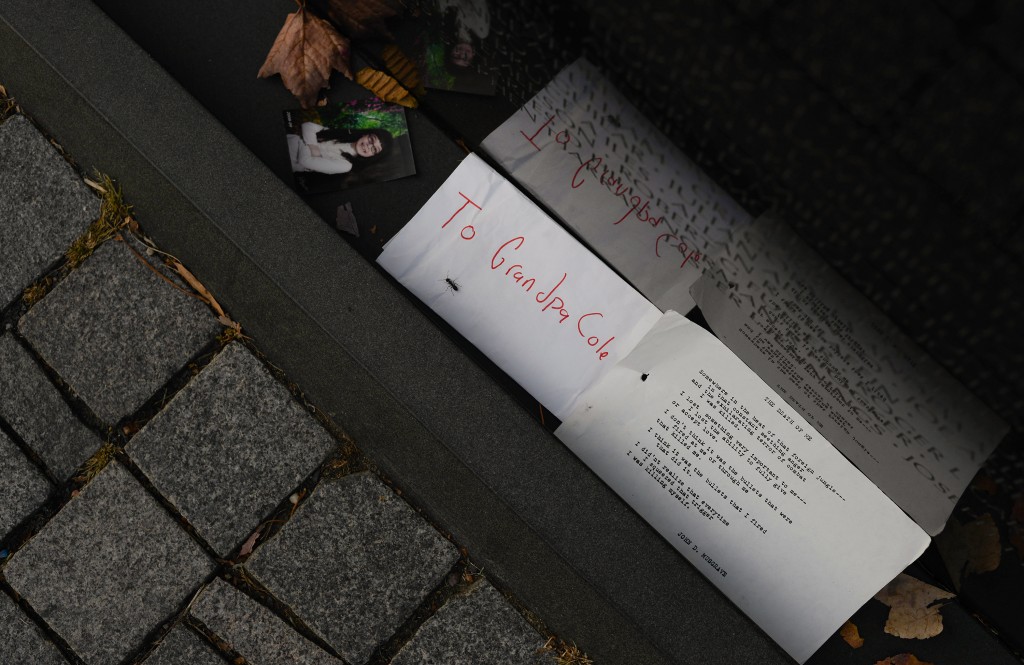 A photo, a letter addressed to “Grandpa Cole” and a chilling poem titled “The Death of Me” were some of the items left recently at the Vietnam memorial. Photo by Ariel Min/PBS NewsHour 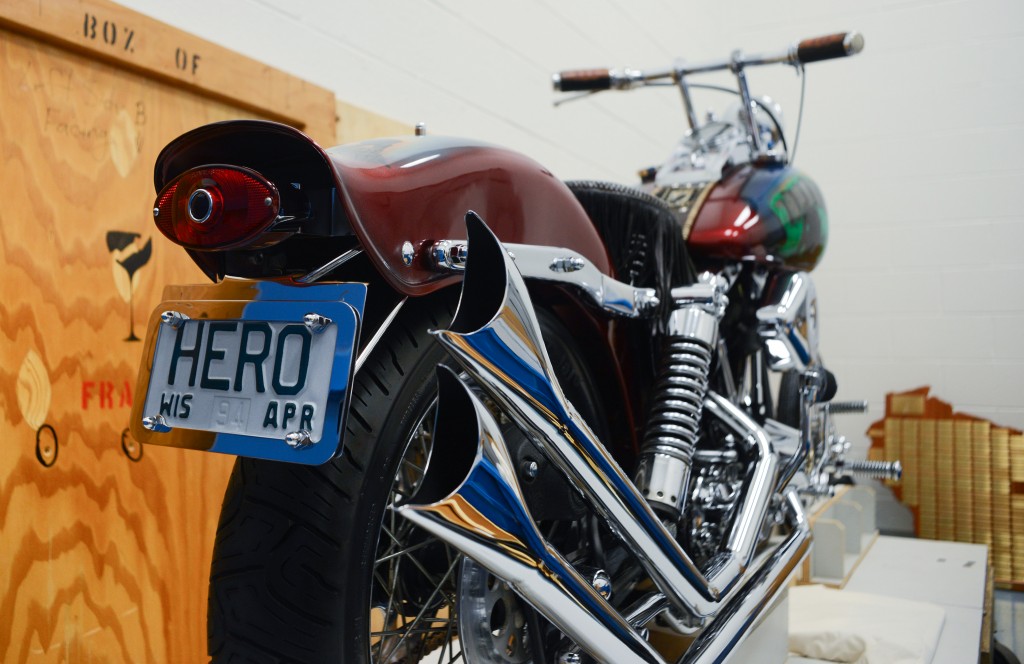 A group of veterans from Wisconsin left this motorcycle at the Vietnam wall. The bike, made from scratch, was constructed in honor of the 37 Vietnam War POW/MIAs from Wisconsin. The group requested that no one be allowed to sit on the bike until all 37 are accounted for and returned home. Photo by Ariel Min/PBS NewsHour

Left: Articles left behind at the Vietnam Veterans Memorial in Washington, D.C., like this photograph of Raymond Williams left by his brother John Williams, are collected and warehoused by the National Park Service. Photos by Ariel Min/PBS NewsHour