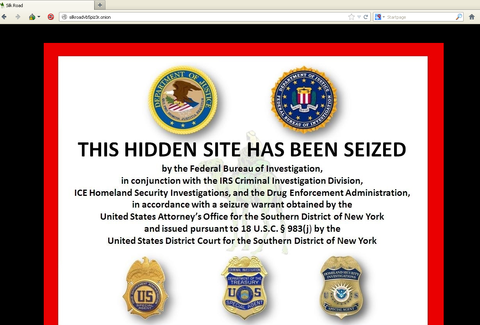 A notice from Federal agencies declares that the online drug marketplace called “The Silk Road” was seized on Wednesday.

The Silk Road, the internet’s largest known marketplace for drugs and other illegal products, was shut down by several federal agencies on Wednesday. Security journalist Brian Krebs broke the story and published the FBI criminal complaint against Ross William Ulbricht, who allegedly operated the Silk Road, where more than 13,000 different illegal substances were listed for sale. Ulbricht, who the FBI says is the man behind the online moniker “Dread Pirate Roberts,” was arrested at a San Francisco public library on Tuesday afternoon. Among other crimes, Ulbricht is alleged to have attempted to have an associate killed via a “clean” hit. It’s unclear as to whether or not the murder actually happened.

The criminal complaint against Ulbricht is filled with incredible details about the Silk Road, which federal agents in charge of the investigation called “the most sophisticated and extensive criminal marketplace on the Internet today.” To maintain anonymity and security, the Silk Road did not reside on the ordinary internet, but on servers connected to a secure network called Tor. Ulbricht, the complaint alleges, brought together suppliers and buyers on his website, and even provided customer service to his users.

A few details revealed in the complaint:

Read the complete criminal complaint against Ulbricht below. It’s a riveting document: