‘The whole police system needs to be rebooted.’ How some cities are starting to tackle reform

As cities across the country move quickly to implement law enforcement reforms in response to the protests over George Floyd’s death, local officials are warning that the changes could take months or even years and likely won’t result in the full disbandment of police departments.

In the weeks since Floyd was killed by a police officer in Minneapolis, city and state officials have joined activists in calling for a wholesale reimagining of law enforcement’s role in society, in particular the way policing is carried out in communities of color.

The city council in Minneapolis made national headlines over the weekend by taking an initial step toward entirely disbanding its police department. In New York and other cities, officials have announced plans to cut funding for the police and redistribute it to other social services and community programs.

But even as they join the calls for sweeping reform, many local officials have in recent days begun acknowledging that the changes will require navigating a complex labyrinth of city and state laws, police union contracts, and budget issues complicated by the economic impacts of the coronavirus pandemic.

Minneapolis is perhaps the most prominent example of a large city running into obstacles as it tries to address policing issues as quickly as possible amid pressure from thousands of protesters calling for change.

“This is a moment where change can happen quickly, but also let’s be real,” said Linea Palmisano, the chair of the Minneapolis City Council’s budget committee. Terms “like ‘dismantle,’ ‘defund’ and ‘abolish’ [the police department] mean different things,” she added, and have varying degrees of feasibility.

On Sunday, a veto-proof majority of nine members of the 13-member city council announced support for disbanding the Minneapolis Police Department, setting the stage for a formal vote.

But the city charter establishes a minimum requirement for the number of police officers based on the city’s population — a little more than 700 officers, according to the latest population estimates. Currently the Minneapolis Police Department has nearly 900 officers and a 2020 budget of $193.3 million.

“I support my colleagues in their vision on this, because everyone deserves to feel safe. And yet I don’t see this happening overnight,” Palmisano said of disbanding the city’s police department.

“Policing doesn’t happen in one vacuum or at one level of government,” she added, noting that reforms by the city will have to be done in concert with the state, which launched a civil rights investigation into the Minneapolis Police Department after Floyd’s death. The state has told city officials “it’ll be a multiyear process,” Palmisano said. 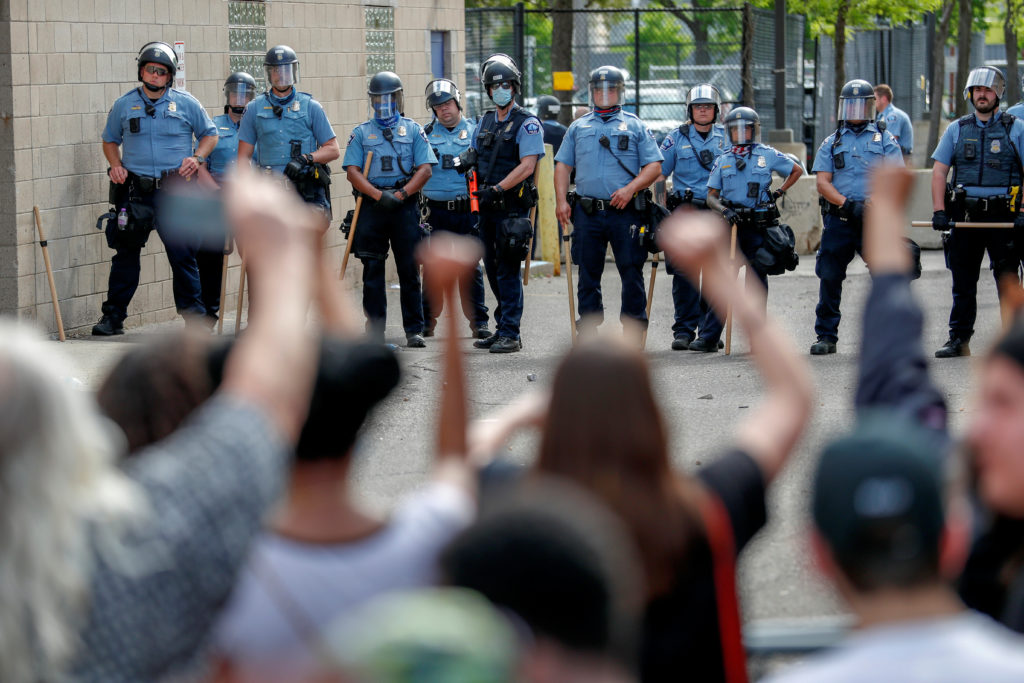 People gather at the Minneapolis Police Department’s Third Precinct station to protest in Minneapolis, on May 27, 2020. Photo by REUTERS/Eric Miller

If the city does ultimately disband the existing police department, it would most likely be replaced with one that still has some armed officers dedicated to dealing with violent crimes, said Alondra Cano, a member of the Minneapolis City Council and chair of the public safety committee.

“I foresee that we have a very robust community response system that addresses things like poverty, homelessness, chemical dependency and mental health,” Cano said. “And a smaller, much more manageable division that focuses on violent crimes, like homicides, stabbing and some of those other issues that might still require the response of law enforcement personnel.”

Already, some changes have gone into effect in Minneapolis while city lawmakers consider how to proceed.

Last week, the Minnesota Department of Human Rights sought a temporary injunction barring Minneapolis police from using chokeholds and neck restraints. The order — signed by Mayor Jacob Frey after it was backed by the city council — includes a requirement that police officers report instances of unauthorized force, and intervene when they see unauthorized force being used.

Derek Chauvin, the white former Minneapolis police officer charged with killing Floyd, pinned him to the ground with a knee on his neck for eight minutes and 46 seconds. Floyd, a black man, can be seen on video footage of the incident telling Chauvin that he can’t breathe.

Chauvin was initially charged with third-degree murder and manslaughter. The charges were later amended to include a second-degree murder charge, and the three other police officers involved in the incident were charged with aiding and abetting murder.

Other states have followed Minnesota’s lead in taking action while city governments weigh their next steps. In California, Democratic Gov. Gavin Newsom last week announced that he would ban police use of the carotid hold, a chokehold that cuts off blood flow to the brain.

In New York, state lawmakers passed a bill Monday banning chokeholds and named it after Eric Garner, a black man who died as the result of being placed in a chokehold by a police officer during a confrontation in Staten Island in 2014.

Mayors, too, have jumped into the fray, adding other influential voices to the debate but also underscoring the challenges of coordinating policies across different levels of government. The moves come as Congress is also debating several police and criminal justice reform proposals.

In Seattle, where there have been violent interactions between police and protesters, Mayor Jenny Durkan temporarily banned police from using tear gas. New York Mayor Bill de Blasio has announced plans to slash the New York Police Department’s $6 billion budget and divert the funding to youth services, among other reforms. 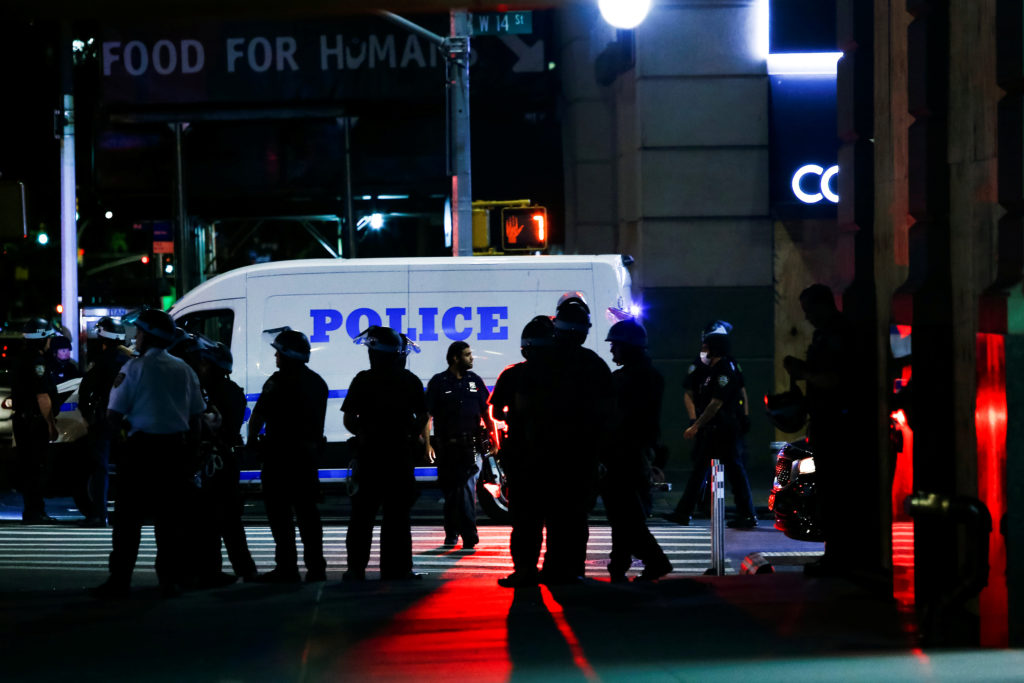 NYPD officers detain protesters for violating curfew during demonstrations in reaction to the death in Minneapolis police custody of George Floyd, in the Manhattan borough of New York City on June 2, 2020. Photo by REUTERS/Eduardo Munoz

De Blasio and other mayors have also faced added pressure in recent days to shift money away from police departments to plug budget gaps created by revenue shortfalls due to the economic shutdowns around the pandemic.

Minneapolis, for example, is facing a budget shortage of at least $165 million, resulting from a combination of $65 million in increased spending to combat the coronavirus, and a $100 million decline in property tax payments, parking concessions and other sources of city revenue.

“The whole police system needs to be rebooted.”

“We do need some kind of law enforcement entity because crimes do happen, unfortunately,” he said. “But do we need to live in a society where so many of our services are provided by people who are authorized to kill and have a firearm on them at all times?”

The size and scope of the protests have helped reformers make the case for major changes that go beyond targeting abuse by individual police officers and focus more broadly on tackling systemic problems related to race and policing, said Peniel Joseph, the founding director of the Center for the Study of Race and Democracy at The University of Texas at Austin.

“This is about reimagining large aspects of the criminal justice system, but the protests are about more than criminal justice,” Joseph said. “It’s [about] reinvesting in communities.”

Local officials acknowledged that any reforms to policing, including how taxpayer dollars are spent, will require buy-in from police departments and the powerful unions that represent them in contract negotiations. And several officials stressed that real change could only be achieved if police officers receive better training to reduce racial profiling and other forms of bias.

Andy Skoogman, the executive director of the Minnesota Chiefs of Police Association, said his group was “open to any and all discussions about the future of policing,” but needed more details before signing on to a plan that would disband the police department in the state’s largest city.

“We’re not opposed to reinvesting funds for social services for mental health, domestic violence” and other issues, he said. “Police are often the first responders to this and they don’t have the professional expertise or the training to handle them.” The challenge, he added, is coming up with reforms that won’t compromise public safety.

Going forward, “we will need public safety. It’s not an option [not to have police at all]. It’s just a matter of how do we transform it into something where everyone” trusts the system, said Melisa López Franzen, a state senator in Minnesota and member of the Democratic-Farmer-Labor Party.

Left: Police aim a tear gas gun during a protest on May 28, 2020 in St. Paul, Minnesota. Photo by Scott Olson/Getty Images