Then and Now: Children Draw to Cope with 9/11 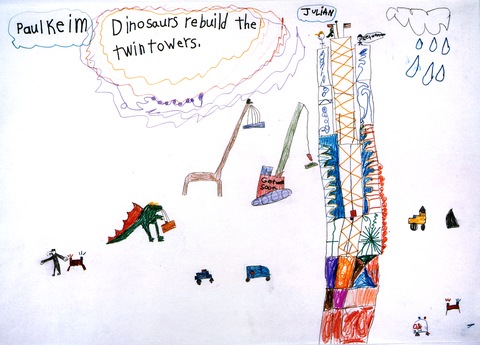 September 11 didn’t make sense to 7-year-old Julian Cortez and 8-year-old Paul Keim, so they drew a scene that gave them comfort in the days after the terrorist attacks.

“The dinosaurs, the policemen, the doctors and the construction workers are building the new World Trade Center. The people at the top of the building are telling the people who lived to get well soon,” they wrote 10 years ago in a caption to their art.

A decade later, 5-year-old Ava Bullis of Old Bridge, N.J., drew an American flag and a U.S. soldier when asked what Sept. 11 means to her.

In a national moment of grief and panic – and an equally charged time of remembrance – artwork becomes a way for children re-interpret painful images in more familiar terms, to make sense of the unimaginable.


“Drawings are a real depiction of the moment,” said Lori Evans, a psychologist at the NYU Child Study Center. “I think that sometimes we underestimate what kids see and hear. What these drawings tell us is that even young children had an understanding of what was going on.”

That understanding has shifted with time.

Most children today weren’t around to experience firsthand the terror and sadness of 9/11. Their impressions have been formed piecemeal through family stories, news coverage, and an evolving American narrative about what the day represents – a story that has since been intermingled with a decade of war, recession, and the threat of more terrorism.

Working with New York City-area families, PBS NewsHour asked elementary children to draw pictures about what the day means to them. While the Twin Towers still play a pivotal role in most artwork from even the youngest children, new symbols have also worked their way into the conversation.

“You can see the difference between someone who was near the World Trade Center and someone who was not alive at the time. They are drawing pictures of the new freedom tower memorial and rainbows,” Evans said. “That is hopeful, which makes sense. The child is being told by someone what they are experiencing now.”

Below, Evans explains what child art can tell us about how children cope with both tragedy and remembrance.

NewsHour: When a child witnesses a tragic event, what are some of the ways they express it through drawing or coloring?

They are drawing what they see. For Sept. 11, the majority of what younger kids draw is two towers with planes crashing into them or up in flames and how the two towers fell down. It’s an image they see repeatedly. When they draw someone who is horrified, you’ve found a child with more cognitive understanding of the situation. With younger kids, you can tell there is feeling in it, but it’s hard to interpret. I have a high school student drawing of two doves plummeting downward. The student gets the idea that not just two buildings fell, that it’s a much more significant event. Those things show us not to underestimate what a child can understand from these things and want to depict. If your child is drawing things like this, then you may want to talk to them about it.

NewsHour: What can this artwork tell us about the way they process grief?

Young kids use art as a way to talk through things. There are improvements from when they are drawing in trauma to when they are healing. What we see over time is less trauma and more factual information, or more messages of hope. I would be concerned if a kid is still drawing all the horror 10 years later. What I want them to see is some hope, some memorializing. We don’t want only horrible drawing.

NewsHour: How is 9/11 being conveyed to most kids today?

It’s very variable. If you lost someone in close proximity, those people are probably still spoken to about the specific day. Other kids are learning things from a much more intellectual basis, such as, “This is what terrorism is.” Kids do have a personal understanding that this isn’t a trauma that is completely over. They can’t just put it in the past because even after 9/11, there was anthrax, there was a thwarted car bombing in New York City. Those events remind kids that it is still there. Kids read subway ads that say “see something, say something,” and they ask questions. Schools are variable in how they handle it – they do it a whole lot or not a lot.

NewsHour: How do you advise parents to deal with explaining something like 9/11 to their children?

It’s about if they are cognitively ready to hear it. I never believe we should hide it because then they will just learn it anyway from sources we don’t have control over. Sometimes it’s a very basic explanation. For a child in 1st or 2nd grade, “It’s a plane that hit the two towers and people are trying to make sure you are safe.” You don’t want to lie to them and say, “You are totally safe.” You can say, “We are doing everything we can to make you safe and the government is helping us do this.” In elementary school, that is what you need to know. Again, it depends on your child, your cultural ethnic beliefs. A lot goes into the explanation, but not saying anything isn’t going to help anyone.

NewsHour: How do these national tragedies typically get passed on to young people?

When they are in the recent past, I think it’s more by oral history. Things aren’t being written into the textbooks yet. So although it may not be covered in there for these first 10 years, a lot of it is passed by oral history and by experience of it. What happens over time is that some of our perceptions of trauma change and memories fade. I think what will happen with any trauma, as long as there is not repeat trauma, it gets relegated to a place in history. Often we will use things like the Holocaust in school to teach diversity. We’re teaching it not because we want people to be traumatized, but so that history doesn’t repeat itself. It’s a matter of wanting to teach, but we don’t want to so overwhelmingly frighten people so they can’t function.