There was still smoke on the horizon and a layer of ash on the ground when 15,000 wildfire evacuees and rescue workers across Butte County, California, sat down for a traditional Thanksgiving meal.

The Camp Fire that swept across Northern California earlier this month, has so far killed more than 80 people, with more than 500 people still unaccounted for, but survivors and rescue workers from the Red Cross were committed to creating some semblance of normalcy, which meant a Thanksgiving feast — turkey, stuffing and potatoes included — provided entirely by volunteers.

“It doesn’t matter where you’re from or what you’re eating or who you’re with, Thanksgiving is for reflection and giving thanks for what we do have,” Red Cross volunteer Amy de la Fuente said. “That’s why I chose to stay [in the shelters] for Thanksgiving. I can’t abandon these people — they’re my family right now.”

I can’t abandon these people — they’re my family right now.”

De la Fuente is one of more than 1,450 Red Cross disaster workers who have been dispatched to help provide aid in the two weeks since the fire broke out. More than half of those volunteers are staying on for Thanksgiving, decking out shelters in holiday regalia and coordinating turkey and all the trimmings for those who lost their homes.

“We live in so much chaos, but people have really stayed united in this disaster,” de la Fuente said. “We all remember we’re humans with basic needs.”

The Camp Fire is the deadliest wildfire in California history. The blaze destroyed more than 13,000 homes as it torched an area the size of Chicago. Firefighters don’t expect to have it totally contained until Nov. 30, which would mark a three-week run.

The Federal Emergency Management Agency has approved $13.3 million in assistance across the state since a major disaster declaration was filed Nov. 12, according to its website. But much of the visible response has come from California disaster agencies and private donors.

“FEMA starts working on Public Assistance very early in a disaster, but it takes a more visibly prominent role after the response phase is completed,” a FEMA spokeswoman told McClatchy earlier this week. 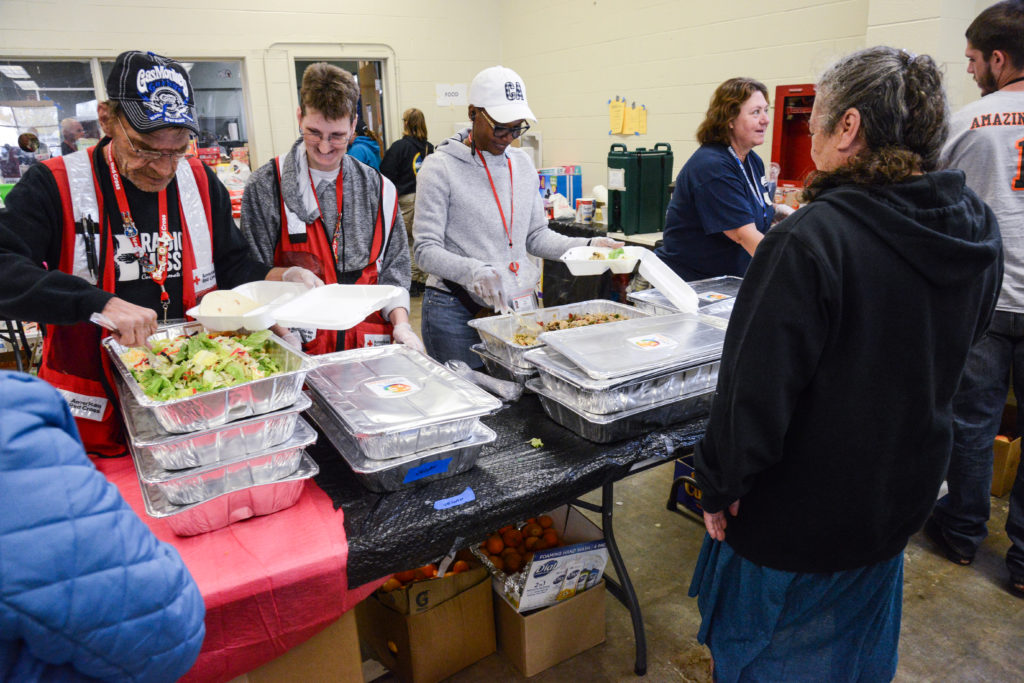 Local California news stations KCBS-TV and KCAL-TV raised $1.27 million in disaster relief from across the state, while the California Fire Foundation raised $800,000 in assistance for some 4,000 Camp Fire victims. The International Association of Fire Fighters, a labor union, raised $1.5 million.

Celebrities, too, have pitched in. Kim and Kanye West lobbied Adidas and West’s own brand Yeezy to donate $500,000, while Green Bay Packers’ quarterback Aaron Rodgers donated $1 million to help those in his home state.

The Northern California Wildfire Relief, organized by the California Community Foundation, has a list of nonprofits and other resources providing aid, too.

Pamela Harris, who lives in Orlando, Florida, has been volunteering with the Red Cross for 17 years. The Camp Fire is her 37th deployment and also the worst she has ever seen. “I went through Katrina. That storm swept houses away, but the town itself, New Orleans, it was still there. Paradise? It’s just gone.”

Rain has helped extinguish some parts of the fire, but has also made rescue efforts difficult, and introduced a greater risk of ash-laden mudslides, which threaten not only the search for the missing but the survival of those who are trying to figure out what’s next. Harris and de la Fuente have urged those living in tent cities or parking lot campsites to come to the shelters.

“I went through Katrina. That storm swept houses away, but the town itself, New Orleans, it was still there. Paradise? It’s just gone.”

“A lot of people won’t come because they want privacy. They want to eat and sleep on their own schedule and have independence. But with the rain, we just want people to come inside where they’re safe,” de la Fuente said.

There’s hope the rain will wash away the smoke and ash lingering in the air. De la Fuente, who wears a mask when working outside, grew close to an 86-year-old woman who arrived at the shelter with a malfunctioning oxygen tank.

When the woman’s daughter stepped away to make a call, she “begged me not to leave her alone,” de la Fuente remembered. “I just kept thinking of my grandfather who is 96. I wouldn’t want anyone to leave him.” 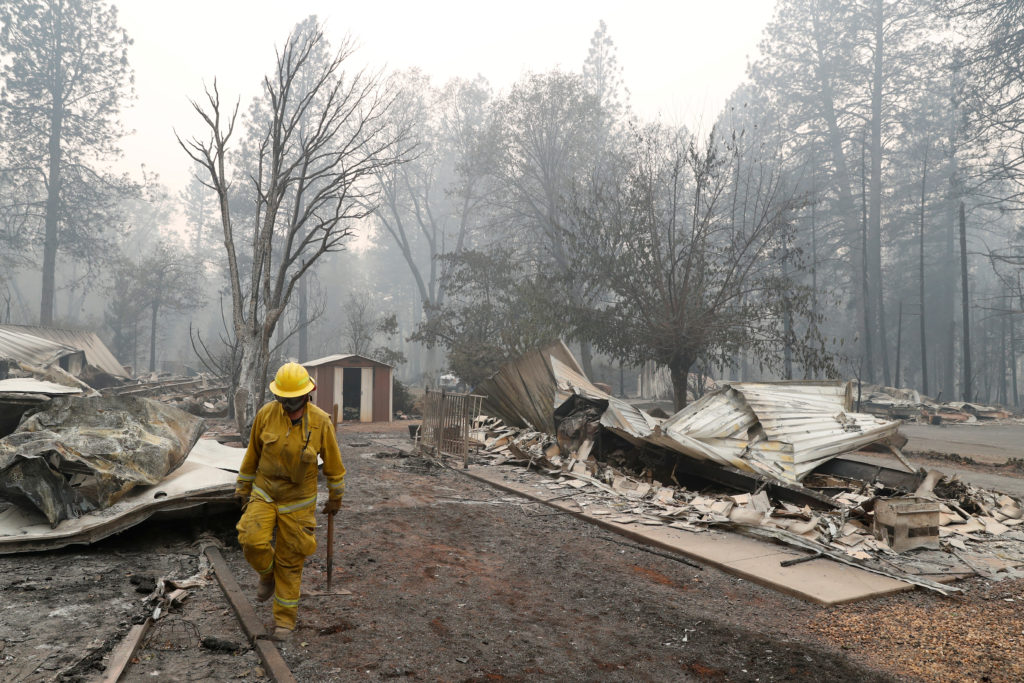 A Cal Fire firefighter walks between homes destroyed by the Camp Fire in Paradise, California. Residents say the evacuation orders came so fast, many had to leave everything beyond. Photo by Terray Sylvester/Reuters

The fire came so quickly and with such heat and fury, many people grabbed nothing but their phones, Harris said. Many were forced to leave family members behind.

One woman told Harris she went outside to feed her pet and when she went back inside, her home was already on fire. She was forced to flee on foot. She ran, hopping in and out of cars whose drivers were also attempting to outrun the blaze.

Some drivers led caravans, packing their vehicles with strangers’ pets and children as the fire razed everything they left behind.

“A lot of people didn’t get an evacuation order,” Harris said. “If they did, they’re telling me they didn’t have enough time to leave.”

Forensic dentists are using dental records to identify remains burned beyond recognition. “It’s a laborious process at times,” forensic dentist and California assemblyman Jim Wood told the PBS NewsHour earlier this week. “But it’s very effective, and it’s been used in many, many mass disasters throughout the last 100 years.”

The National Guard, coroners and police are also working to find and identify missing people. Separated families are relying on Red Cross reunification services, including use of the Safe and Well website. The site is a way for people affected by a disaster to enter information regarding their welfare so family and friends can check their status.

Nearly 9,000 people have marked themselves as safe through this system, and there have been more than 83,900 searches for lost loved ones. Offline, shelters fill bulletin boards with photos of missing sisters and sons and best friends.

“We have to walk past that board every day, and it’s just so hard,” Harris said. 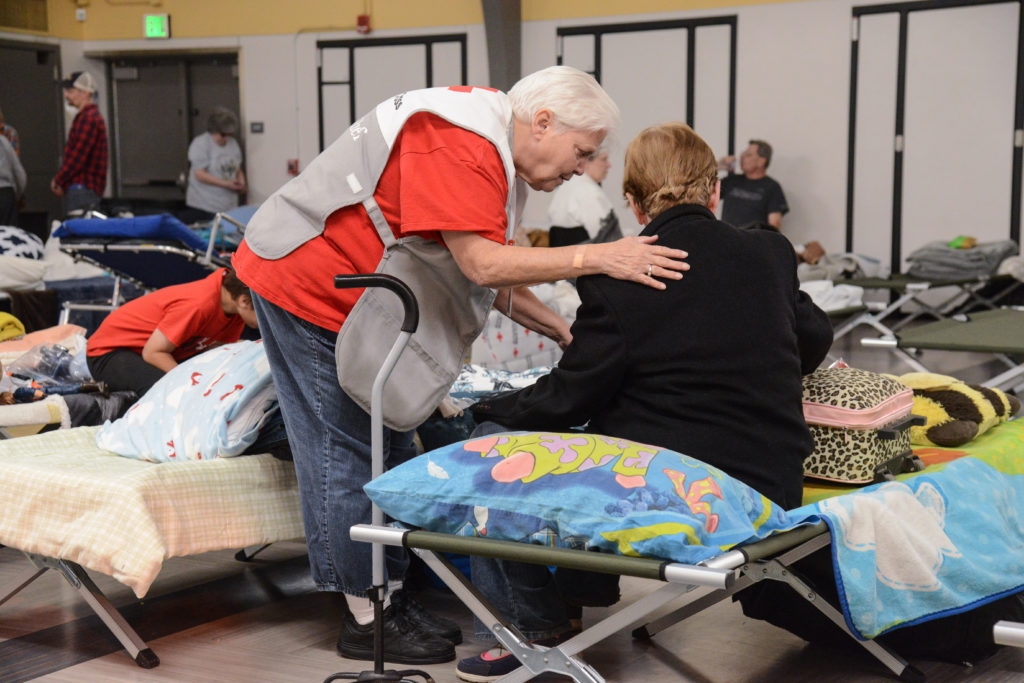 Nurses Tamay Franklin and Susan Lee, check on Yvonne Trannan after she reported feeling short of breath with some mild chest discomfort. “You all are so kind,” Yvonne said. Photo by Daniel Cima/American Red Cross

De la Fuente tries to stay positive, reminding herself the shelter isn’t just for food and medical care. She recently met a young boy, Willie, who amid the chaos of recovery was more than willing to let his birthday pass unnoticed. But de la Fuente found among their donations a remote control car she gifted him.

“I wanted him to feel the love I had for him,” de la Fuente said. “The children here have such positivity [despite everything that’s happened].”

It’s these good and bad moments that have come to define Harris and de la Fuente’s two weeks in the shelter. Harris said that some days everyone is strong, resilient, but other times they’re bursting into tears because they don’t know what to do next.

They’re relying on emergency services to help them rebuild. That’s why Harris flew across country Nov. 10 to serve this holiday season, and also why she has refused to leave. “My family is used to me being away. They don’t need me. These people need me,” Harris said.

Left: Joy and tears as Diane Papedo finds her brother, Phil Mazores and are reunited at the at the Butte County Fairground Red Cross shelter. Photo by Daniel Cima/American Red Cross