We don’t know how many Americans who died while serving during wartime are buried on foreign soil. Why? For one, there isn’t a single organization that tracks the burials. There is no database of every American service member buried overseas. And the reason why there is no database is because finding all of America’s war dead is a complicated process.

While some are buried in formal memorial cemeteries, others are in private cemeteries, mass graves and isolated burial sites. Old records have been lost and new burials are being discovered. Women were not always counted among the war dead. Thousands of Americans fought under foreign flags before the U.S. entered the world wars, and are buried as foreigners. Those missing in action or lost at sea further complicate tracking. And some have just been lost.

But one historian has been painstakingly counting, cataloging and mapping the locations of American war dead buried outside formal memorial cemeteries.

“In my view, who we celebrate on Memorial Day are the Americans who we know were American, were buried in American cemeteries, and we don’t think of the other Americans who were in ambulance services or Commonwealth forces, the French Foreign Legion,” said author Chris Dickon. “We’ve never included them in what we’ve thought of Memorial Day, basically I think because we haven’t known about them.”

While researching a book about one of the first frigates in the U.S. Navy, Chris Dickon stumbled on a burial site in Canada where 200 American casualties from the War of 1812 had been buried, and apparently, forgotten.

“I looked at that cemetery and I went, ‘Well, wait a minute, if these Americans are buried here in Halifax, Nova Scotia, that nobody knew about, where the hell else are Americans buried that most people don’t know about?’ And then I started looking.”

Since then, Dickon has cataloged the burials of roughly 3,600 of America’s war dead who aren’t in official overseas U.S. cemeteries.

As an example, he noted that there were 300 or 400 Americans who fought in the French Foreign Legion with great distinction during World War I. The only recognition of them serving in war, he said, is from books published in the 1920s. “There are no current books or research about them. I put together the first list that I’ve seen who fought in the FFL in WWI,” he said. “That’s new information.”

View The Foreign Burial of American War Dead in a larger map
Explore Chris Dickon’s map of where America’s war dead are buried.

In another example, two dozen Americans are buried in a World War II cemetery in Belgium. “None have any notation on their gravestone that they’re American. You would look at their gravestone and think they’re Canadian or British.”

Similarly is Brookwood American Cemetery outside of London. It’s a communal cemetery, meaning non-Americans and non-war dead can be buried there. On a tour with the cemetery’s assistant director, Dickon was shown a wooded area far from the American portion. “He pointed to a bunch of gravestones and he said, ‘There’s a bunch of Americans over there that Americans don’t know about.’” In his research, Dickon found they were mostly Americans who had joined the British Royal Air Force or the Royal Canadian Air Force, but had been buried as Canadians or Brits.

Towards the end of WWI, 200 Americans were killed in Archangel, Russia. The transport ship Lake Daraga made three trips to bring home the dead between 1919, 1929 and 1934, but the records from the original voyage have been lost. 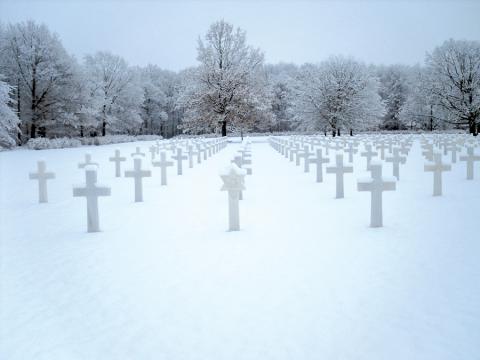 Snow covers the ground at Ardennes American Cemetery in Belgium. More than 5,300 WWII casualties are buried there, and another 462 missing in action are memorialized by name. Photo: ABMC

Bringing home the dead is a relatively new undertaking for the U.S. government.

In the nation’s early years, most troops were buried where they fell. For some highly decorated officers, remains could be collected and sent back, but only if the family covered all the costs — which could be steep given they had to buy and ship a lead-lined coffin to meet the military’s requirements.

But the unprecedented scale of WWI meant an increasing number of families were pressing the government to remove that financial burden.

“The U.S. didn’t know how to bring back the fallen when the war ended,” said Tim Nolsal, public affairs director for the American Battle Monument Commission or ABMC.

Opinion, he said, was divided: some felt the bodies should be brought back to the U.S. Others felt it was honorable for soldiers to stay on the battleground. Ultimately, “the government decided to make it a decision for the next of kin,” Nolsal said. The family could have the body repatriated and buried in a national cemetery, or buried overseas in a national cemetery. Either way, the government picked up the costs. Only if the family decided on a private burial would the government only cover the costs of transportation and a headstone. 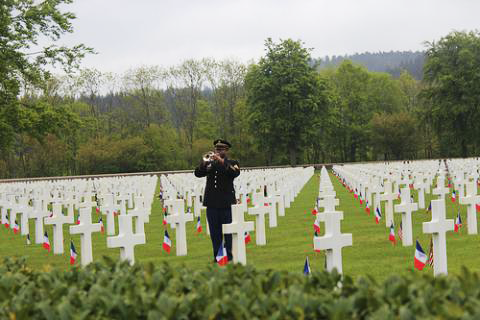 A bugler stands among the headstones at Epinal American Cemetery in France during the 2013 Memorial Day ceremony. The WWII cemetery holds the remains of 5,255 Americans and memorializes another 424 missing in action by name. Photo: ABMC

Across 10 countries, more than 130,000 Americans are buried and another 124,000 missing in action are memorialized by name in one of the 25 cemeteries overseen by the ABMC. They are mostly casualties of the world wars, Nosal says, because the option to be buried overseas ended during the Korean War. The missing in action include the Korean and Vietnam wars.

“Now, we bring everybody back,” Nosal said. 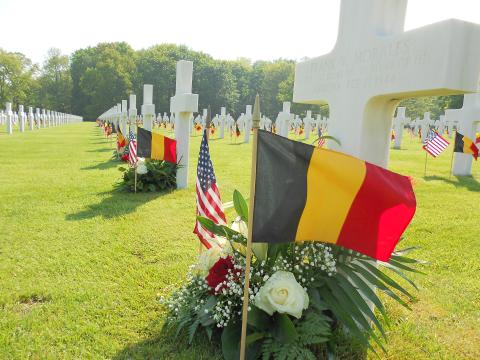 Flags and flowers were placed at a headstone at Ardennes American Cemetery in Belgium for Memorial Day in 2013. The WWII cemetery has 5,323 American casualties buried there, and another 462 missing in action memorialized by name. Photo: ABMC

Left: Ship's Serviceman 1st Class Samuel Hernandez-Moreno pays his respects to a fallen service member buried at the Brookwood American Cemetery and Memorial, about 30 miles outside of London, on Memorial Day. There are 468 American casualties from WWI buried at Brookwood, and another 563 missing in action are memorialized by name. Photo: U.S. Navy by Mass Communication Specialist 2nd Class Jennifer L. Jaqua