Several Baltimore officers were hurt Monday as riots erupted, following the funeral of Freddie Gray, a 25-year-old black man who died April 19 from a spinal injury while he was in police custody. Capt. Eric Kowalczyk said some officers sustained broken bones and one was unresponsive as rioters threw rocks and bricks at local police officers.

Thousands of mourners attended Gray’s funeral Monday. Doors to New Shiloh Baptist Church in the city opened at 9:30 a.m., and by 11:15, the 2,500-person church was almost filled to capacity, the Associated Press reported.

The white casket encasing Gray’s body was opened for family, friends and supporters to view as projections on both church walls read, “Black Lives Matter & All Lives Matter.”

In front of the northern Baltimore funeral home during Gray’s wake on Sunday, cars sounded their horns in support as demonstrators shouted, “Honk for Freddie!”

Baltimore resident Caira Byrd, 21, was one of the handful of peaceful protesters outside the wake. She said Sunday’s protest was to show an alternative to the chaos that erupted during protests Saturday night.

“We want to give them an insight on a positive protest,” Byrd said. “Everybody was hurting. It was painful. We as black people, we’ve been going through this for a long time. So as of right now, Freddie Gray, we feel like he died for change.” 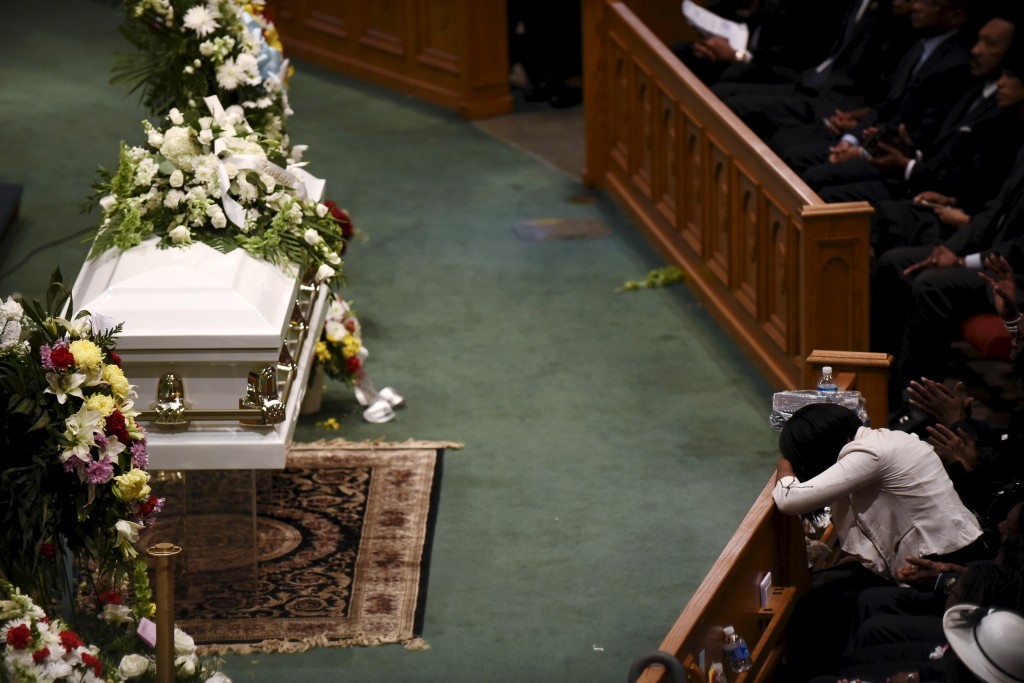 A member of the family reacts during Freddie Gray’s funeral service at New Shiloh Baptist Church in Baltimore. Mourners lined up on Monday before the funeral of Gray, a Baltimore black man who died in police custody. Photo by Sait Serkan Gurbuz/Reuters

Tension between black residents and the police is not new in Baltimore. Last year, the Baltimore Sun released an investigation that found the city had paid about $5.7 million since 2011 to citizens who sued for police brutality and civil rights violations.

The tension was reignited with the release of a cellphone video on April 12 that showed officers dragging Gray’s limp body into a police van while he was screaming in pain.

“Still right to this day I still have some resentments, but I’m not going to respond with a negative element. I’m just going to take what I know through my experience and try to help the next individual’s experience to be a much more positive outcome.”

Diamond Scott, a 29-year-old Baltimore resident said she was protesting Sunday for a better future for her 7 year old son. “I just want justice, that’s it.”

After Gray died, six Baltimore officers were suspended with pay while the police department conducts a criminal investigation. Additionally, the Department of Justice is reviewing the case for potential civil rights violations.

City officials said the investigation would be completed by Friday, May 1, and the findings would be given to state prosecutors who then will decide whether state criminal charges will be filed.

Left: Residents watch as protesters clash with police near Mondawmin Mall after Freddie Gray's funeral in Baltimore April 27, 2015. Seven Baltimore police officers were injured on Monday as rioters threw bricks and stones and burned patrol cars in violent protests after the funeral of Gray, a black man who died in police custody. Photo by Sait Serkan Gurbuz/Reuters