“We were trying to figure out what to do. How to help,” said Brad Morris, when his cousin, a Houston police officer, gave them a tip: ‘We’ve got boats,” he said, “but what we need is high water trucks.”

So Brad and his brother Adam Morris got on Craigslist and found a truck. It cost $13,000, was airbrushed with skulls, and called “The Punisher.” But with a 5-ton axle, and weighing in at 21,550 pounds, it would be able to drive through waist-high water. By Tuesday night, the brothers were in Houston, along with David Couch, their brother-in-law, to help with citizen rescues. By that time, at least five had died in the flooding, the National Weather Service was forecasting days of torrential rain, and while many had been evacuated, countless more were stranded in their homes. (On Thursday, the death toll climbed to 31.)

David Couch leans against a 5‑ton 6×6 truck in a subdivision off Barker Cypress Road between the Barker and Addicks reservoirs in Houston, Texas. The brothers spent two days driving the truck through flooded areas assisting and rescuing people.

The brothers’ first stop was Bear Creek, a neighborhood that remained flooded because it was so close to Houston’s Addicks Reservoir, which had overflowed its banks several days before. They worked in tandem with local law enforcement, driving through 5-foot-high water to rescue people and pets, including pit bulls, cats, parakeets and hedgehogs. People brought along suitcases and other valuables; one woman brought a steak. Many had stayed through the storm but days later the waters had not subsided, and they were now running out of food. Others had evacuated but went back to their apartments to get belongings or check on something, including a boy who was electrocuted in Bear Creek on Tuesday while trying to go back to feed his sister’s cat. 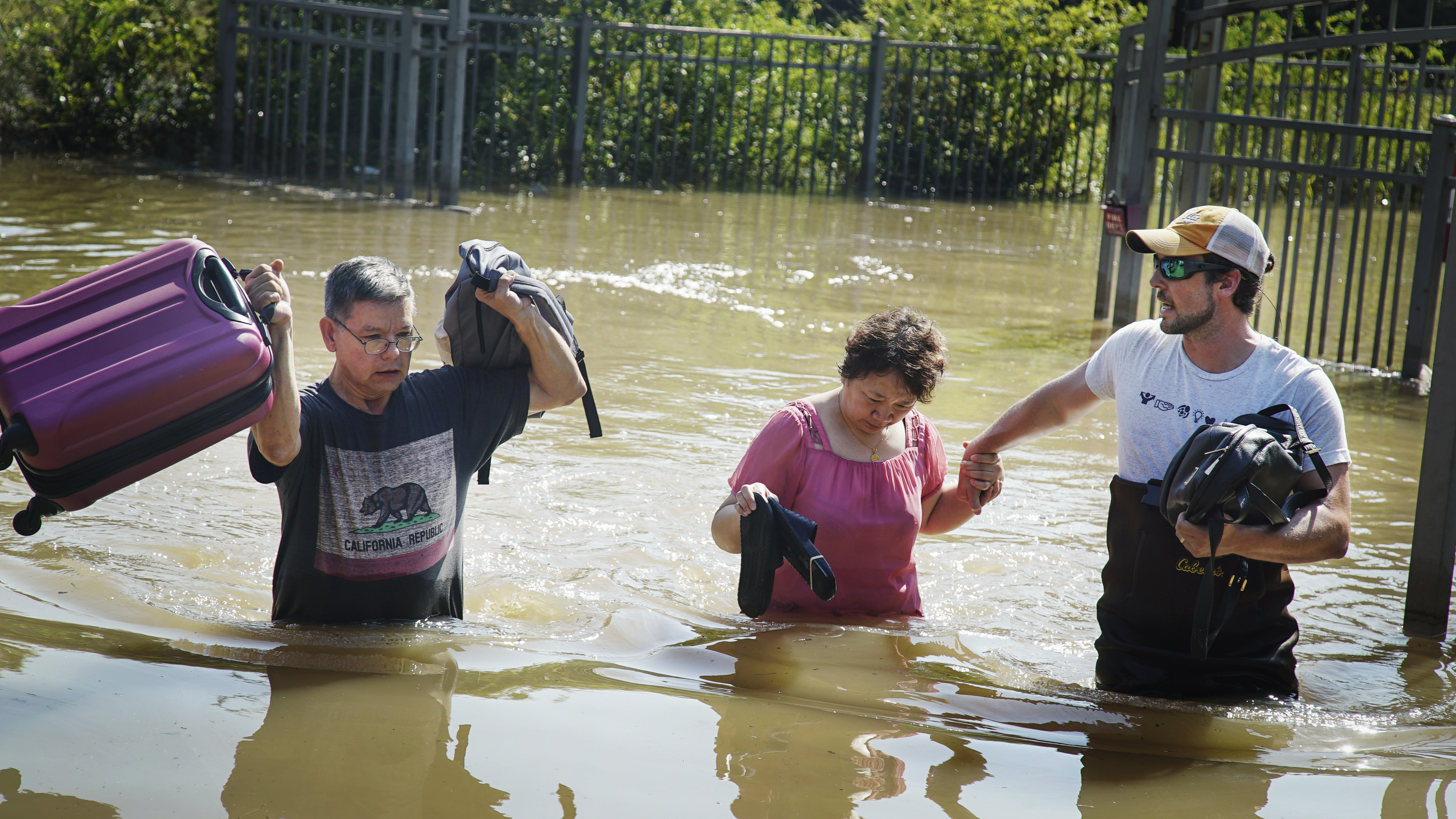 Adam Morris assists Wiley Driskell and Heide Driskell after they went to their partially flooded home to retrieve their belongings in a subdivision off Barker Cypress Road between the Barker and Addicks reservoirs in Houston, Texas on Thursday, August 31. 2017. Photo by Abbey Oldham

On Thursday, the brothers moved southwest for a second day of rescues, driving through a flooded neighborhood of subdivisions sandwiched between the Atticks and Barker Reservoirs, which had also overflowed its banks. There, police had set up a launching point for boats. Houston Police Sergeant Rodney Adams estimated that 2,500 people had been rescued at that spot alone — most of them by ordinary people. “We depend on them,” he said of the citizen rescuers, crediting them with 90 percent of the rescues and home visits.

Among the pickups was Jennifer McArver, a female bodybuilder 11 days out from her first show. McArver had waded three miles to Walmart to get the right food for her diet, only to find it closed, and have to wade to another store. “Thank you so much, god bless,” she said as she climbed in the truck, grocery bags held high over her head. “Y’all are my blessing right now, on a hope and a prayer.” She was returning to her apartment, despite flooding on the lower floors, so she could complete her training on an elliptical and treadmill inside.

“We depend on them,” he said of the citizen rescuers, crediting them with 90 percent of the rescues and home visits.

When the brothers dropped off McArver at her apartment complex, they found a family of six waiting outside, the father and mother begging for someone to bring them diapers, milk and bread. Johnny Gonzalez, a neighbor, who wore an American Eagle hat and a “Texas made” tattoo, told them he’d get on the brothers’ truck and bring back the goods.

“A lot of people were not prepared,” he said. He sized up “The Punisher” as he got on board. “And I tell you what, I’m gonna buy me a big truck after this.”

Over the next several hours, the brothers rescued nearly a dozen people, often wading into waist-high water in their cowboy and camo boots, while other citizen rescuers paddled by in speedboats, kayaks and canoes. Justin Davis, who had evacuated his family Monday, waded back to his apartment to get birth certificates, social security cards and proof of insurance to file to FEMA, after learning that his flood insurance didn’t cover rentals.

Hell of a story — Justin Davis gets off a truck after wading home through waist-deep water to retrieve his documents so he can file insurance claims in a subdivision off Barker Cypress Road between the Barker and Addicks reservoirs in Houston, Texas on Thursday, August 31. 2017. He’s having to pay out of pocket for the hotel, rental car and meals for his family and is hoping FEMA will reimburse them for damages. He told his family ‘when we come out on the other end, we’re gonna have a hell of a story to tell.’ Photo by Abbey Oldham

Davis’ family of four was holed up inside a nearby hotel, his two teenagers getting a little “stir crazy,” he said. “But I told my family, when we come out on the other end, we’re gonna have a hell of a story to tell.”

As would Tamila Davis, who the brothers picked up from her apartment; she and her husband had waded back for “baby stuff.” Earlier that week, Davis had swum to a rescue boat with her baby in her arms. Thursday, she wore a T-shirt that said “the struggle is real.”

The brothers’ last stop: to answer a 911 call the police had gotten about a woman in a nearby apartment complex screaming for help. By the time the brothers arrived at the apartment, a citizen rescue boat had already been there to help.

Above: Brad Morris and Adam Morris bought a 21,550 pound truck on Craigslist for the purpose of helping people in Houston. The truck was nicknamed 'The Punisher' by its previous owner. Photo by Liz Flock / PBS NewsHour