Three years ago this week, Michael Brown was killed in an officer-involved shooting in Ferguson, Missouri.

A makeshift memorial of balloons, candles and stuffed animals built by neighbors and activists this week was a reminder of the city’s yearslong struggle to reform its policing practices, and the debate over police use of force nationwide.

Three cases of police misconduct had new developments this week — all of them involving body cameras. Here’s a look at what happened and what’s next for the families of the victims and the officers involved.

BALTIMORE POLICE MAY HAVE PLANTED OR MISHANDLED EVIDENCE

Last month, a Baltimore Police Officer was suspended and two of his colleagues placed on leave after body camera footage appeared to show them planting fake evidence at a crime scene.

As documented by NPR, footage released by the Maryland Public Defender’s Office captures a January arrest of a suspect at a rowhouse.

Police originally used the footage — in which Officer Richard Pinheiro finds a soup can stuffed with a clear plastic baggy outside a row house — to arrest a Baltimore man on suspicion of drug charges.

The suspect was held for months in jail, the Baltimore Sun reported.

What Pinheiro apparently didn’t realize, as the Sun points out, is that “police cameras have a feature that saves the 30 seconds of video before activation, but without audio.”

When the Maryland Public Defender’s Office got a hold of the footage, it found those earlier moments, which show Pinheiro placing the soup can into a pile of trash before walking out of the alley alongside the house, and then, activating his body camera and returning to the alley to announce a discovery.

The Baltimore Police Department suspended Pinheiro and put other officers on the call on paid leave, NPR reported.

All charges were dropped against the suspect, who is now free, but the public defender’s office raised broader concerns about the officers’ involvement in other ongoing cases. (Pinheiro, it said, was listed as a witness in 53 other cases).

“We have long supported the use of police body cameras to help identify police misconduct, but such footage is meaningless if prosecutors continue to rely on these officers, especially if they do so without disclosing their bad acts,” it said in a statement.

Earlier this week, the public defenders’ office said they had found footage indicating other officers had also planted evidence, this time during a November 2016 traffic stop.

The footage, authenticated by the Baltimore Sun, shows Officer Glenn Peters coming up empty while searching the driver’s side of a car he had stopped late Nov. 29.

But footage from 30 minutes later shows Peters searching the same area again and “emerging almost immediately with a bag of alleged drugs.”

Peters is arguing he has been transparent from the start about the traffic stop, including through several memos he wrote explaining a thorough search of the vehicle and a pause to turn on his camera again when he spotted the bag under the steering wheel. His attorney suggested to the Sun that the police department felt pressure to flag the incident prematurely in light of other footage that emerged earlier this summer.

The two officers in this case were referred to BPD’s Department of Internal Affairs. All charges have been dropped against Shamere Collins, the driver involved in the stop, and other cases that rely on the officers’ testimony have also been dismissed.

Collins told the Sun she “intends to pursue all legal options against the police department.”

The discoveries are the latest chapter in the troubled police department’s attempts to weed out misconduct and regain public trust.

In March, seven officers were arrested for abusing their power. In April, the Justice Department placed the city under a consent decree aimed at reforming the city’s policing practices — a result of the civil rights investigation that followed the death of Freddie Gray in 2015. The city has planned public forums next week to select an independent monitor for the decree, which will pour millions of dollars into improving city law enforcement.

On Wednesday, Baltimore Police Commissioner Kevin Davis said at a news conference that “it’s irresponsible to jump to a conclusion that the police officers were engaged in criminal misconduct. That’s a heavy allegation to make.”

On Tuesday, he warned officers not to “attempt to recreate the recovery of evidence after reactivating your body worn camera,” CNN says.

Prosecutors have dropped at least 40 criminal cases following the release of the two sets of footage, NPR reported. More than 50 other cases are being reviewed, the state’s attorney’s office in Baltimore told CNN. The public defender’s office told NPR hundreds of other cases were “at risk of being tossed out.”

Meanwhile, the state’s attorney office told NPR it “believes that this represents a small percentage of officers, and will support the Baltimore Police Department as it works to rectify the issue.” 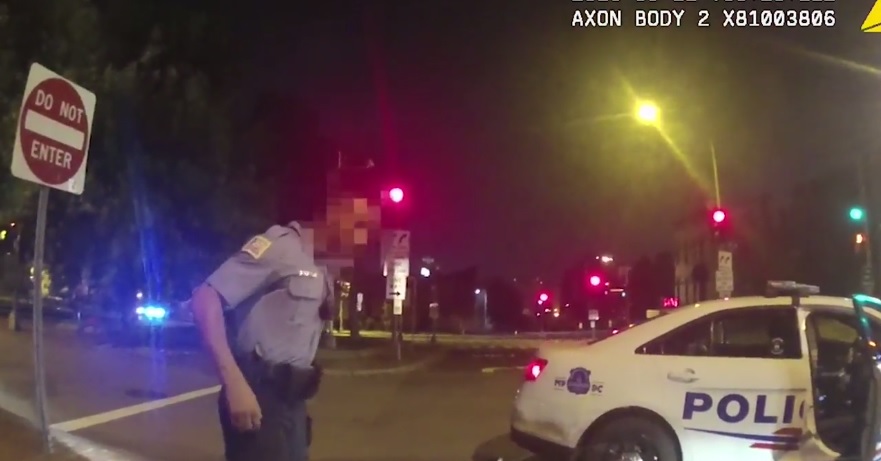 A still from the body camera footage released by D.C. police weeks after officer Brian Trainer shot and killed motorcyclist Terrence Sterling after a traffic stop in 2016.

Officer Brian Trainer had originally flagged Sterling, 31, to pull over after responding to a report of a motorcycle driving erratically through D.C.

When Trainer started to get out of the passenger side of his vehicle, Sterling intentionally rammed his vehicle into the squad car. Trainer responded by shooting at Sterling, striking him in the head and back. Sterling was later pronounced dead at a local hospital.

Weeks after the shooting, D.C. police released edited body camera footage of the shooting’s aftermath. Sterling is seen bloodied on the ground, while an officer performs CPR on him.

Trainer and his partner did not turn on their body cameras until one to three minutes after the shots were fired, leaving an incomplete picture of what occurred. Weeks later, the D.C. police department changed its internal policy requiring officers to activate the body cameras immediately after they respond to a dispatch call.

A grand jury decided Wednesday to not bring charges against the officer involved in Sterling’s death, the U.S. Attorney’s Office said.

Following a review of the evidence, prosecutors said in a statement they concluded that there was “insufficient evidence to prove beyond a reasonable doubt that the officer violated Mr. Sterling’s civil rights.”

The decision comes 10 months after the shooting, a time during which Sterling’s family and demonstrators criticized police response as too slow.

“It is hard to reconcile how quickly the police will charge our citizens yet, when it’s one of their own, it seems as if they are looking for any way to avoid it,” the family said in a statement earlier this summer.

With the U.S. Attorney’s Office done with their criminal investigation, the Metropolitan Police Department will now start its disciplinary review of the officer’s action, D.C. Mayor Muriel Bowser said in a statement Wednesday.

The mayor also said MPD has asked for Trainer’s resignation, saying, “I do not believe there can be real accountability if the officer remains on the force.” Trainer currently remains on administrative leave.

In her statement, Bowser reiterated that Trainer violated MPD policies when he failed to properly turn on his body camera.

Late last year, Sterling’s family filed a $50 million lawsuit against the District and the police department.

Original incident:
An Arkansas teen died after two officers fired at him July 25 outside of an emergency shelter and foster care center.

Aries Bortez Clark, 16, was shot outside of East Arkansas Youth Services. He died overnight at a local hospital, Local 24 reported.

Officers said the teen had pointed at them with a gun, but investigators wouldn’t comment on whether he had a weapon.
At the time, a director at EAYS told Local 24 that Clark was not staying at the center.

The two officers were put on paid administrative leave as a state district attorney took up an investigation.

The Arkansas Democrat-Gazette reported Wednesday that no criminal charges would be fired against the officers involved in the shooting of Clark.

A report from Arkansas District Attorney Scott Ellington said employees had called police when Clark, who had been a resident of the youth center, tried to return to the facility after leaving two days earlier without permission.

Body camera footage released alongside Ellington’s report showed officers trying to convince Clark to put down the weapon before firing their guns. A report released by Ellington said that officers found a black BB gun at the scene, and that the officers’ use of force was justified.

“Clark’s actions that day brought about the circumstances that threatened the lives of at least four law enforcement officers had the gun he brandished been a firearm as perceived by the responding officers,” Ellington wrote. “Therefore, I find the officers were justified under these circumstances.”

The case is closed, Ellington said.

Left: A still image captured from police body camera video appears to show two Baltimore police officers look on as a colleague places a small plastic bag in a trash-strewn yard (not shown), according to the Maryland Office of the Public Defender in this image released in Baltimore on July 19, 2017. Photo courtesy of Baltimore Police Department via Reuters