TIME includes ‘feminist’ in poll of words to ban

TIME left readers puzzled, and many outraged, yesterday with the inclusion of the word “feminist” in a poll titled “Which Word Should Be Banned in 2015?” 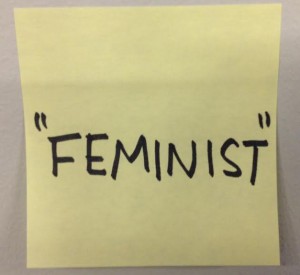 TIME included “feminist” in a poll asking “Which Word Should Be Banned in 2015?”

“Feminist” appears alongside “om nom nom nom” and “yaaasssss” in a list where readers can choose which word makes them want to “seek out the nearest the pair of chopsticks and thrust them through your own eardrums.”

It is also currently leading the poll, having netted 50 percent of votes so far—a result due in part to 4Chan users, who have rallied on message boards to upvote “feminist.” 4Chan, some of whose users have attracted attention recently for their involvement in “Gamergate” and hacking celebrities’ nude photos, has multiple threads dedicated to tracking poll results and asking others to vote.

Author Katy Steinmetz provided this rationale for choosing “feminist” in a blurb on the poll:

You have nothing against feminism itself, but when did it become a thing that every celebrity had to state their position on whether this word applies to them, like some politician declaring a party? Let’s stick to the issues and quit throwing this label around like ticker tape at a Susan B. Anthony parade.

It is, though, a thing that TIME has written about before; multiple pieces from the magazine have centered on female celebrities’ relationship with feminism. TIME has published a list of 17 female celebrities talking about what feminism means to them along with profiles of Shailene Woodley and Kelly Clarkson in which their stance on feminism appears in the headline.

Yes, why does everyone have to talk about feminism? Why can’t we all just be feminists quietly? At home? Only very late at night when everybody’s sleeping? Or like in our teeny tiniest voices? Or in a soundproof hyperbaric chamber, maybe, where it won’t, like, bother anybody?

Steinmetz defended the choice as a critique on the media.

@RebeccaSchinsky Please see the blurb for context. The inclusion is responding to trends in the media, not feminism itself.

This is far from TIME’s first run-in with 4chan, who have intervened to manipulate poll results several times before. In 2009, 4Chan users gathered votes for TIME’s Person of the Year poll to place 4Chan founder Christopher Poole at the top—a prank that TIME itself covered.

Washington Post writer Caitlin Dewey described the move as a calculated play for more page views, summarizing it as “trolling the trolls, and doing so successfully.”