How it feels to almost die from a nut allergy

“I have a life-threatening allergy to nuts.”

That’s the line I use most often in restaurants. Simply asking that a dish be made without nuts, or informing a waiter that I have an “allergy,” isn’t enough. Between mild food allergies, stomach sensitivities, lactose-intolerance, digestive disorders, weight-loss diets, meat-free diets, health diets, and just general preferences, waiters and waitresses are inundated with special food requests.

In fact, in a way, I already have.

I was a 19-year-old college student at the time and had gone out to dinner with my mom, who was visiting, and my then-boyfriend, Charlie. I started off the meal by informing our waitress that I had an allergy to peanuts and tree nuts. But, by the time we ordered dessert, she’d forgotten.

I took one bite of our cheesecake and knew immediately — from my itchy palate — that there must be nuts in the topping. Spitting what I could into my napkin, I went to the bathroom and tried to wash my mouth of the rest. Within minutes, I was feeling sick to my stomach. Apologetic, the waitress confirmed there were crushed almonds on top of the cheesecake. We called it a night and drove home.

Back at my apartment, Charlie and I said goodbye to my mom, who began her two-hour drive home across the Nebraska-Missouri border. Charlie headed to a video store to get us a movie (No DVR back then!), and I decided to have a bath. But when I bent down to run the water, I was seized by the strangest sensation. Heat in my face. Trouble breathing. I looked in the mirror to find my face swelling up like an inflated balloon.

I knew something was terribly wrong. I called 911, then ran to the porch to wait for an ambulance. Charlie arrived just then, video in hand, and noticed the swelling and the panic in my eyes. I could barely talk. Within seconds, I was laying flat on the wood porch, struggling against my ever-shallowing breath. The effect was terrifying. I can still feel the chipping paint on the wood slats below me as my body thrashed around, desperate for air.

And then I wasn’t breathing anymore.

Today, more than 15 million Americans suffer from food allergies — at least 2 million of them from nut allergies alone. But when I was a kid, in the 1970s, nut allergies were anomalies. There were no “peanut-free schools” or pretzel options on airplanes. “You’ve never had a PB&J?” people would say to me, SO FREAKING OFTEN, with absolute incredulity. “I can’t imagine.” 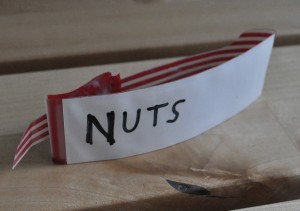 This is the wristband I wore during my hospital stay. After my recovery, my brother, Larry, asked: “Is that your allergy or your diagnosis?”

On Monday, a landmark study in Britain showed that exposing children who are at risk of nut allergies to peanut butter at some point during their infancy (between four and 11 months) makes them about 80 percent less likely to develop a peanut allergy by their fifth birthdays. It is an amazing discovery, considering that complete avoidance of peanuts has been the reigning approach for a solid decade.

Why I acquired this allergy — why anyone acquires this allergy — is a mystery. As a small child, I always refused peanut butter sandwiches, opting instead for bologna. My parents assumed it was simple preference. It wasn’t until I made a peanut butter birdfeeder in preschool that we realized my aversion to nuts was an allergy. I was sent home that day with hives covering my hands, arms, face and neck.

I tried my best to avoid nuts after that, of course. But I was young, and people just didn’t take it as seriously as they do today. I had countless allergic episodes. The symptoms were always the same: My mouth and throat would feel itchy and raw. My stomach would churn. I would eventually throw up, sleep it off and feel better in the morning.

And then came that fateful night in Lincoln.

As Charlie tells it, my body went rigid, and my lips turned blue. He tried to administer CPR, but my tongue had swelled to the point where he couldn’t do anything. From the look of it, he said, I was either dead or dying.

By the time the paramedics arrived, I was in full respiratory arrest. Their first rule of business was to get a tube down my throat so they could push air to my lungs. It wasn’t easy. According to the paramedics’ report, the first several efforts failed because my throat had closed up; there was nowhere to slide the tube. But they didn’t stop working. They never stopped trying. Not for a second.

Finally, they got the tube down my throat and began pumping air into my lungs — or, to be accurate, my lung. Singular. My right lung had collapsed by then, leaving only my left to receive the air. Unfortunately, as the paramedics loaded me into the ambulance, it was apparent that my situation wasn’t improving. I had a pulse, but a weak one. And I’d been without air for at least two minutes. When I got to the emergency room at Lincoln Memorial Hospital, I was still in respiratory arrest.

There, the doctors took over. I was injected with all kinds of drugs, fitted with a chest tube for the collapsed lung, and placed on a respirator. I was stable, but comatose, and the prognosis was grim. As I lay in a coma in the ICU, my parents and Charlie at my side, doctors revealed the distinct possibility of severe brain damage.

Some people worry about earthquakes. Others about car wrecks. I worry about whether there’s pesto in the ravioli or pistachios in the ice cream. It’s been 22 years since a bite of a cheesecake almost ended my life. But, because of fast-acting paramedics and trained doctors (this world’s REAL miracle workers), I made a complete recovery.

Today I am married — to Charlie, of course. (How could you not marry the girl you watched come back to life?) Nine years ago we had a daughter. When it came time to find out if she was allergic to any food, we took no chances — skipping over the skin pricks and going straight for the blood test. The results were almost as miraculous as my survival: She wasn’t allergic to a thing.

But millions of other kids are — more than ever before. And, although we still know precious little about what causes allergies and even less about how to fight them, research like that conducted in Britain is bringing a degree of relief and hope to those of us who have seen the deadly side of cuisine. To think that a family — even one family — could be spared the terror that mine felt during those long hours in the ICU all those years ago does good things for my heart.

When I came out of the coma, my parents were beside me. My mom was holding my hand. That’s what moms do, don’t they? I couldn’t speak (or even swallow) because of the tube running down my throat. Seeing the fear in their eyes, I knew instinctively that they didn’t know whether I was going to be okay. Not being able to communicate with them was unbearable.

Finally, I decided to get a message to them by tracing words with my index finger. At first, neither of them knew what was happening. But then my dad figured it out and offered me his palm to write on.

GET THIS DAMN THING OUT OF MY MOUTH, I scrawled.

When I got to the word “damn,” a huge smile — I’ll never forget that smile — spread across my dad’s face. Not only was I alive and awake. Not only was I able to form words. But, by God, I was cursing again. All was right with the world.

Left: Wendy Thomas Russell describes what it's like to live with a severe nut allergy, days after scientists release surprising new research on the subject. Photo by Getty Images.