How a time-use expert uses her time

Sociologist and time-use researcher Liana Sayer studies how people spend their time. But when unforeseen delays interrupt her schedule, she’s only human. Here’s the story of how one time-use expert worked to regain control of her day. 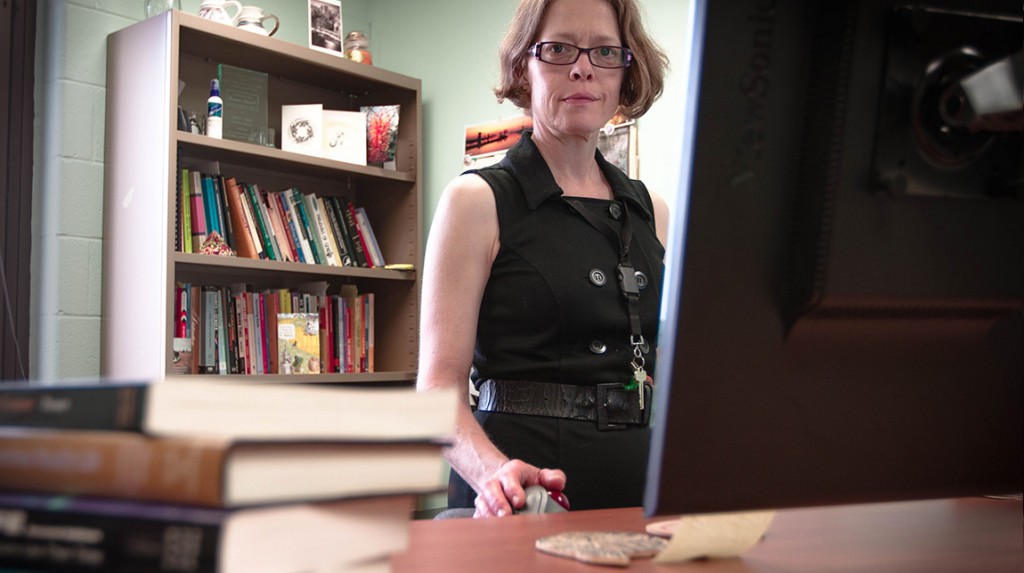 Before her workday even begins, time-use expert Liana Sayer’s schedule is already off course.

A day earlier, strong winds and heavy rain delayed her flight from Lubbock, Texas, routing her through Dallas and New Orleans before she finally arrived in Washington, D.C., after midnight. By the time she got to bed at 3 a.m., it was clear that she wasn’t going to make it to her 6 a.m. spin class.

Sayer studies how the frenetic pace of work, family and personal obligations consume daily life, minutes and hours at a time. But outside of her research, she has not yet managed to apply these same skills to her own life.

“That would be handy if I could do that,” she said with a wry smile. “What it does is make you more aware of the complexities of how you spend your time outside of work.”

As a sociologist and director of the University of Maryland’s Time Use Laboratory, Sayer explores the ways that gender and social class guide the ways that people use their time. She looks for patterns and consequences of time use and the ways that these actions influence people’s daily lives.

When she’s not in her office, Sayer lives with her mother, who depends on Sayer’s care, as well as her husband and their three cats. And her recent trip to Texas was not for pleasure but instead to visit her sick older brother and take care of family business.

Sayer has no children, but she said her life accidentally stumbled into an area of her own research known as the second shift, which is commonly understood to be parents who work full-time professionally while taking care of a child. However, in Sayer’s case, she has served since 2008 as her mother’s caregiver.

“Caregiving has very mixed consequences for people,” she said.

Years ago, Sayer said she would have worked through the night to conquer unforeseen delays and to get her life back on schedule. But these days, life’s demands and mental worry make it increasingly difficult for her to rebound from unexpected setbacks as she once had.

“Over time, it just saps your reserves,” Sayer said. “You’re just less able to tax yourself further and recover from it.” 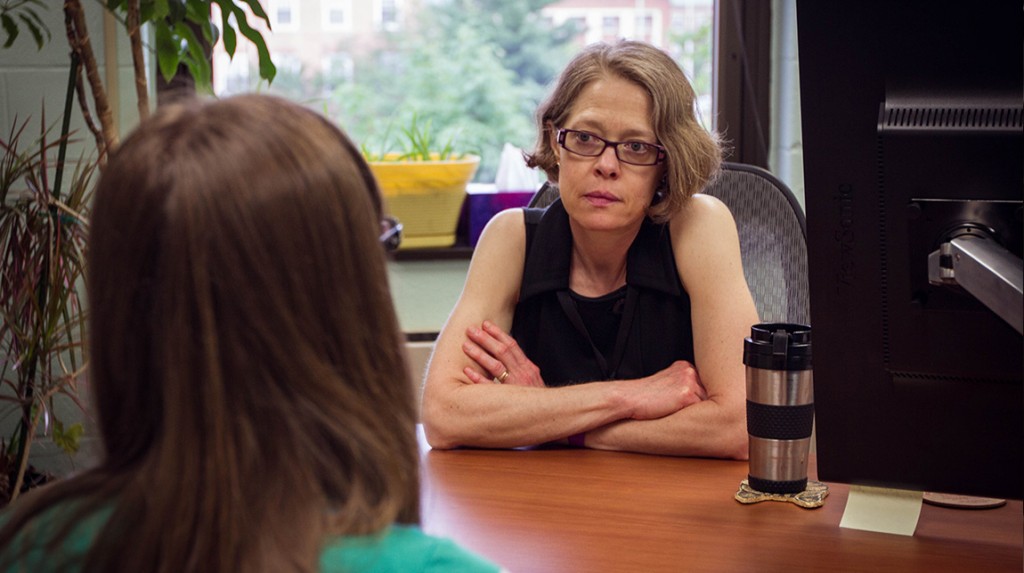 By the time she walks 15 minutes from her house and switches on her office’s fluorescent lights, it’s 12:45 p.m. Even during the summer doldrums on the University of Maryland campus, her workday began nearly four hours behind schedule. Half of the day is gone.

At her standing desk, she surveys her email inbox. In it, 49 unread messages wait for her. She checks three times a day — morning, noon and before wrapping up the workday.

“If I responded to them as they came in, I’d get no work done,” she says.

During spring and fall semesters, a flurry of emails and meetings scatters disruptions across her days. She once relied on her own memory to stay on top of her to-do list, but that system just doesn’t work anymore.

“Increasingly, I can’t rely on that. What happens now is I tend to get interrupted or distracted,” she says.

Sometimes, she even needs back-up reminders, setting up a note on her Microsoft Outlook calendar and another in Google Calendar.

“Teaching days, I almost always feel rushed,” she says. “By the time I’ve dealt with one interruption, the other thing [I was suppose to do] is just out of my head, and I won’t think about it again until I get reminded about it.”

For many people, this blur of activity is a symptomatic of a condition that Sayer’s colleague, University of Maryland sociologist and time-use researcher John Robinson, calls “hurry sickness.”

That is when “people run a life out of control” with “so many things to do,” Robinson said.

Hurry sickness is when “people run a life out of control” with “so many things to do.” — University of Maryland sociologist and time-use researcher John Robinson

For five decades, Robinson has studied how people spend their time. In 1965, he directed the first national study that tracked time use. And in recent years, contrary to conventional wisdom, his research has found that people actually have more leisure time than they did when he first began his research.

He says mobile devices, especially smartphones, do much to drive the social phenomenon of hurry sickness.

“All these new technologies, they make me frantic, so i imagine they do the same to other people,” Robinson said. “They make their way into the workplace, so employers can keep better tabs on what you’re doing and increases the possibility that you feel you’re a part of that hurry-up society.”

Sayer herself is planning to update her six-year-old cell phone for a flashier smartphone. She wants to use an app that Belgian time-use researchers developed that crashes on her current phone. She’s even contemplating jumping into social media after having “tweeted maybe three times in my life.”

A growing number of academics are turning to social media to promote their research, she says.

Of course, this would further add to her to-do list and fragment her day.

As a researcher, being able to focus on a single question at a time is one reason why she entered academia in the first place, she says.

Sayer is no multi-tasker. When she talks to you, she stops what she is doing, looks you in the eye and listens to you. It’s actually refreshing. She does not attempt to fumble through conversation while constantly pecking away a response email or reviewing a grant proposal.

She says most of the research on multitasking “shows that people think they’re managing that well, but they’re really not. Neither task is getting done that well because most of these things require your actual attention.” 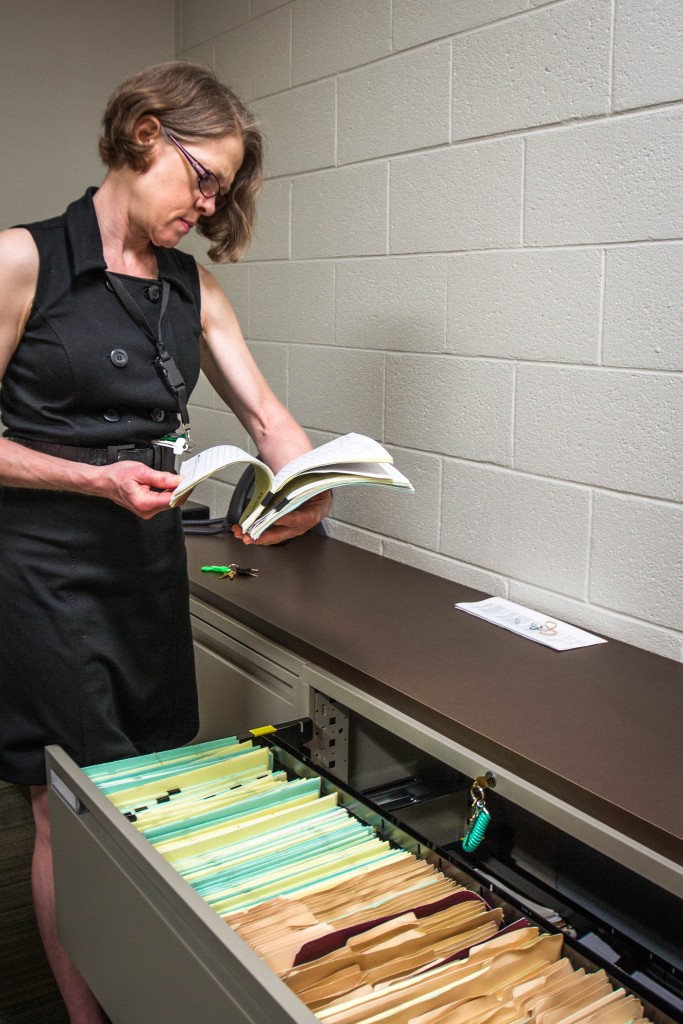 Time-use researcher Liana Sayer reads through a time diary in the University of Maryland’s Time Use Laboratory. With these diaries, researchers track how many minutes and hours each day people spend doing housework, childcare, working or sleeping. Photo by Megan Hickey.

It’s now 2:41 p.m. Sayer sets out to check her office mailbox. Winding through the arts and sociology building and walking down two flights of dimly lit stairs, she runs into an office administrative assistant who is lingering outside of the Time Use Laboratory, looking for a place to store some spare furniture. Not in my lab, Sayer tells her.

She returns to her office by 2:50 p.m. And forgets to check her mailbox.

Coming and going, she always takes the stairs. Her purple FitBit is evidence of the valued role exercise plays in Sayer’s life. She says it helps her to manage stress, and she relishes each chance she has to practice yoga, spin or lift weights.

As she reviews a grant proposal she had promised to submit (the deadline just a few hours away), she hears the pipes in the ceiling above her office gurgle. She notices a growing brown spot over her office doorway and wonders if she needs to throw a tarpaulin over her computer.

Back to her mailbox — this time to tell the administrative assistant about the pipes.

At 3:30 p.m., she’s on her way back to her office with an armful of mail and notices a package full of checks and expense reports for the Population Association of America, a professional group that she serves as secretary-treasurer, that had been priority-mailed to her days ago.

She approves four checks and plans to leave the office by 5 p.m. Then, she has to answer an email that requires a software update for her to view a contract that needs verification. It is now 3:40 p.m.

The next 30 minutes of her life belong to Adobe Acrobat.

At 4:12 p.m., she finally accesses the contract for an upcoming reception for a professional organization where she serves on the board. Apparently, there was a discrepancy about seating.

“Now I should be able to do what I’ve attempted to do for the last 30 minutes,” Sayer says. “It’s one of those things that you think will only take two minutes to do.”

Days when she feels that she has successfully managed her time happen about once a month, she says.

That sense of accomplishment doesn’t usually materialize except when Sayer is staring down the barrel of a grant deadline. Then, she shuts her office door and refuses to answer email in the middle of the day.

On this day, she starts to surrender to her to-do list at 4:28 p.m. There are 44 unread messages in her inbox.

“I’m obviously not going to get through my email today,” she says. “Some of these things, they can wait until tomorrow.”

By 5:15 p.m., maintenance workers show up outside her office to fix the pipes and patch the leak. She looks at the 51 unread messages that now sit in her inbox.

“I’m going to finish at home,” she says with resignation.

She’ll cram the leftover office work somewhere in between tidying up the house, feeding the cats, making dinner, eating (usually around 8), chatting with her mom and husband, cleaning, reading the newspaper and getting to bed by 11:30.

So, even as the day winds to a close, her to-do list only gets bigger.