Timeline of events in Ferguson

Overnight 47 people were arrested, but the atmosphere in Ferguson, Missouri, was more subdued than previous nights, 11 days after the Aug. 9 shooting death of Michael Brown, an unarmed black teenager who was killed by a white police officer.

Before heading to Ferguson Wedesday, Attorney General Eric Holder’s op-ed appeared in the St. Louis Post-Dispatch: “We understand the need for an independent investigation, and we hope that the independence and thoroughness of our investigation will bring some measure of calm to the tensions in Ferguson,” he wrote. “In order to begin the healing process, however, we must first see an end to the acts of violence in the streets of Ferguson.”

Holder arrived in Ferguson with two goals: to help calm the community and check on the ongoing federal investigation. Holder met with students at a local community college and with Brown’s family. We’ll have more on that on tonight’s NewsHour.

Below is the timeline of events that we have been following:

Overnight, 31 people are arrested from as far away as California and New York, according to the St. Louis Post-Dispatch. Police again used tear gas to disperse crowds.

After nearly a week and a half of unrest, Ferguson residents express their sorrow, outrage and even fatigue. 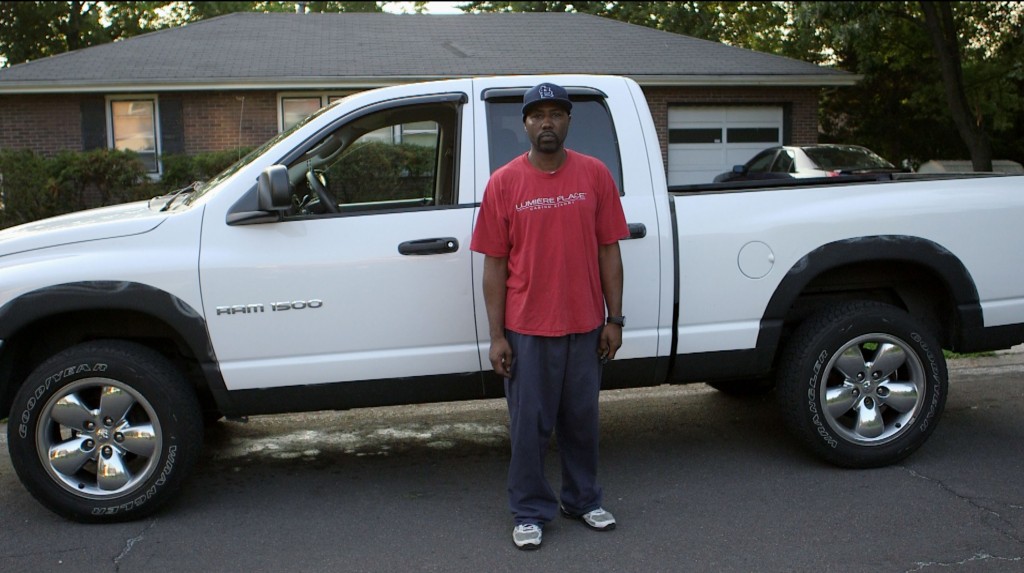 Ferguson resident George Paige expressed his frustration with the situation in his town. Photo by Mike Fritz/PBS NewsHour

“My nerves are real bad about just the whole situation. Because some days I wanna be mad, but some days I can’t be mad,” says George Paige. “Because somebody gotta have structure for those young people. We gotta have a level head for them young people. I can see their grief. I seen it. I lived it. So I know how they’re feeling.”

Amnesty International announces it will deploy human rights teams to Ferguson as police officers appear to use both Long Range Acoustic Devices, or LRADs, and tear gas to suppress protesters.

The situation in #Ferguson has prompted us to send human rights teams. First time we've deployed inside the US. http://t.co/09HQClqy76

At 3 a.m., Missouri Gov. Jay Nixon announces that the National Guard has been summoned via executive order to “help restore peace and order and to protect the citizens of Ferguson.”

Attorneys for Michael Brown’s family and the forensic scientists who conducted the autopsy speak about their preliminary findings in a press conference at the Greater St. Mark Missionary Baptist Church in St. Louis.

Dr. Michael Baden, the medical examiner who conducted the autopsy, says that Brown was shot at least six times but that there were no signs of a struggle. He adds that the police officer who shot Brown, Darren Wilson, needs to be evaluated as well.

Gov. Nixon lifts the curfew that had been in effect for two days.

Attorney General Eric Holder orders a medical examination to be performed by a federal examiner, in addition to those being carried out by local officials and Brown’s family.

The results of the Brown family’s independent examination reveal that Brown was shot at least six times, including once in the top of his skull. All of the shots were fired at Brown from the front. Previously, details of the shooting were withheld from the public.

Protests continue into Sunday evening as Ferguson residents approach another night of curfews.

Conflicting reports of organized, “pre-planned” looting and shooting prompt Ferguson police to bear down on peaceful protestors hours before the curfew was to begin. 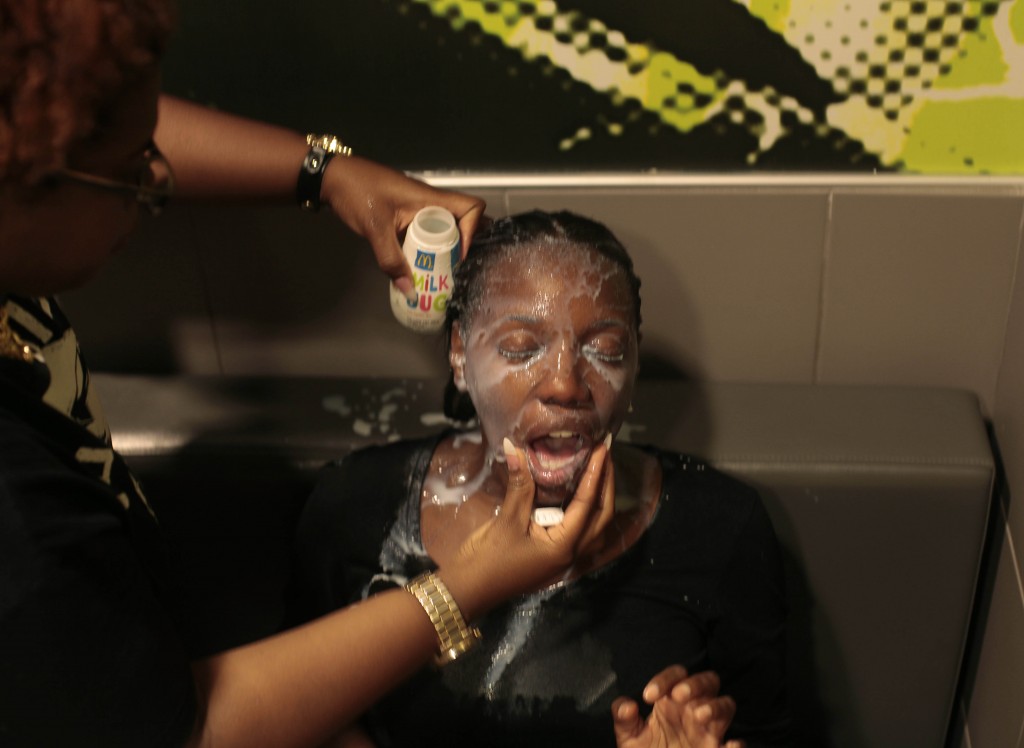 A woman has her face doused with milk after suffering the effects of tear gas reportedly used by police on Sunday in Ferguson. Photo by Joshua Lott/Getty Images

Journalists on the scene reportedly are ushered into a “press” area largely removed from the events taking place and are asked multiple times to either turn their cameras or camera lights off.

Mustafa Hussein, a student contributing to the volunteer-run KARG Argus Radio and who was manning the station’s live stream from West Florissant Ave., is threatened at gunpoint by a police officer unwilling to be recorded on camera:

Gov. Nixon declares a state of emergency and mandates that Ferguson residents remain in their homes between the hours of midnight to 5 a.m.

Despite many protestors leaving before the curfew started, SWAT-geared officers deploy smoke-based deterrents.

Police officials say the smoke emitted from the weapons is a non-irritant, a claim that protesters say is untrue.

By the end of the night seven people are arrested and one man is shot and in critical condition. 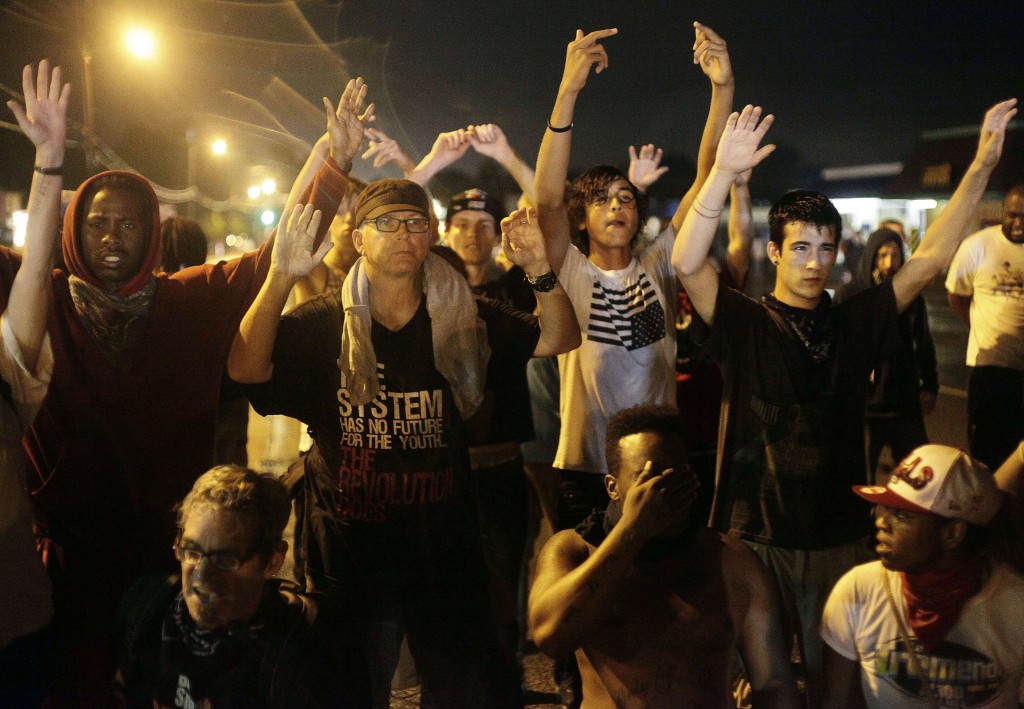 Demonstrators protest by holding their hands up while gathered on the streets of Ferguson, Missouri, late on Aug. 16. A crowd of some 200 demonstrators defied a curfew that came into effect early on Aug. 17. Photo Joshua Lott/AFP/Getty Images

Tensions rise throughout Ferguson immediately following the police’s naming of Darren Wilson as the officer who fatally shot Michael Brown. Calls for the Ferguson Police Department to release Wilson’s identity had been pouring in as news of Brown’s death spread. But authorities had initially resisted, citing concern for Wilson’s safety.

In addition to Wilson’s name, the Police Department releases footage of a robbery allegedly committed by Brown in a press conference led by Ferguson Police Chief Thomas Jackson. Brown’s family was not given the chance to review the footage and identify whether or not he was, in fact, depicted in the video.

Gov. Nixon announces that the Missouri State Highway Patrol would take over security operations in Ferguson.

Earlier, U.S. Attorney General Eric Holder indicated that he was concerned about the police use of military-style equipment and that the activity is sending a “conflicting message.”

Speaking from Massachusetts while on vacation, President Obama appeals for “peace and calm” and says that he has asked the Justice Department and FBI to investigate the incident.

Police urge protesters not to gather after dark after three nights of demonstrations and looting shake the community.

In the evening, the confrontation takes a dramatic turn when SWAT teams are deployed. Scores of journalists and individuals take to social media to chronicle the military-like presence.

Two reporters, The Washington Post’s Wesley Lowery and Huffington Post’s Ryan Reilly, are arrested — an incident that even President Barack Obama commented on during a press conference Thursday — while charging their phones at a local McDonald’s. Lowery films his conversation with one of the officers and Reilly tweets that they were being ordered to leave the building.

Video of my arrest: http://t.co/baiYPQGfc7/s/ZHkX

The two are later released without being charged.

And in a statement, President Obama acknowledges strong passions over the killing, but he said they should be expressed in a way that heals, not in a way that wounds. 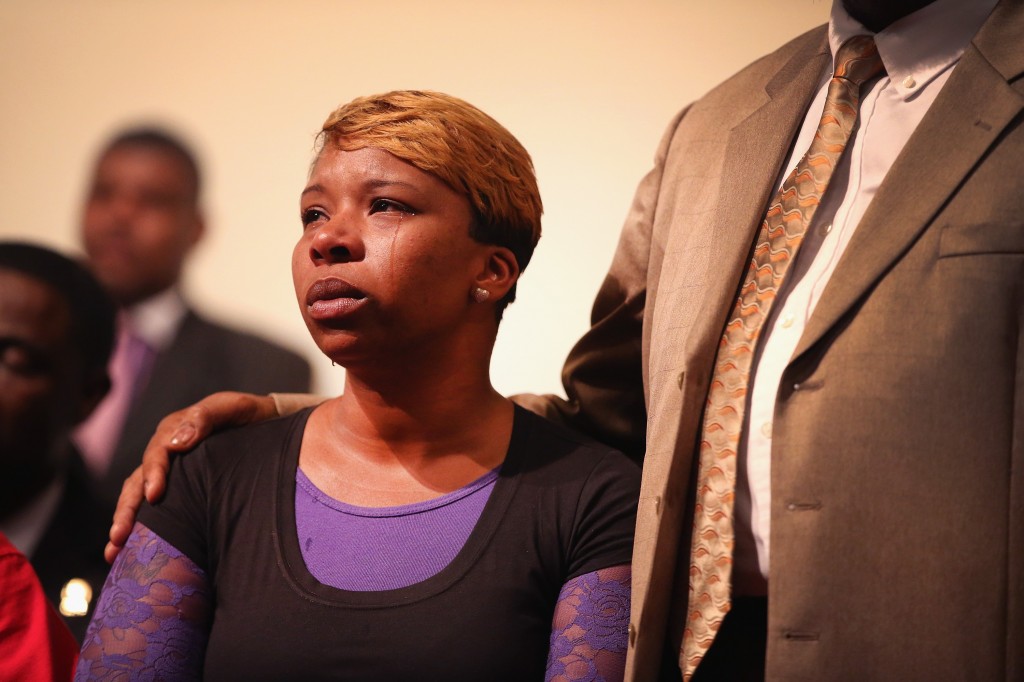 For a second night, protests boiled over into violence. For a closer look at the unrest, Judy Woodruff talks to Jim Salter of the Associated Press.

New clashes between police and citizens break out Monday night with reports of tear gas and rubber bullets being used on the crowds.

St. Louis County police begin to take stronger measures than the night before, arriving on the scene in Ferguson in an armored vehicle and backed by SWAT units. Police urge residents to return to their homes and clear the streets.

The militarized appearance of the police appear to unnerve many residents.

At least five people are arrested, making a total of 50 since Saturday, when Michael Brown was shot and killed by a policeman.

The killing of Michael Brown has sparked outrage and protests in Ferguson. Jeffrey Brown gets reaction from Sherrilyn Ifill of the NAACP Legal Defense and Educational Fund and Greg Meyer, former captain of the Los Angeles Police Department.

"We are one!" Michael Brown's uncle leads the crowd in a chant of unity. https://t.co/p2WsCYUZaW

Overnight and through early Monday morning, nearly 300 police officers respond to reports of gunfire, looting and arson. Tear gas is used to subdue the crowds, 32 arrests are made and two officers are injured.

USA Today breaks down the sequence of events around the shooting:

Brown was unarmed, and all the shell casings found on the ground were from the officer’s gun, Belmar said.

Left: Demonstrators have been gathering in Ferguson, Missouri, since the Aug. 9 shooting death of unarmed teen Michael Brown to call for the arrest of the officer, Darren Wilson. Photo by Joe Raedle/Getty Images