To scope out Zika, Houston scientists set traps for mosquitoes

The county, which includes Houston, stretches across 1,777 square miles and is the third most populous county in the U.S. The area’s warm, muggy climate and snaking system of bayous provide an ideal habitat for mosquitoes — and the diseases they carry.

The county began battling mosquitoes in earnest in 1965, after an outbreak of St. Louis encephalitis. Hundreds of people contracted the virus and 32 died.

These days, mosquito control efforts include chemical spraying: on foot, by truck and occasionally from airplanes. But spraying happens strategically, after careful research reveals the geographic distribution of infected mosquitoes, and sometimes birds, which carry West Nile.

The county’s tab for mosquito control runs $4 million or more a year.

The surveillance cycle begins outdoors. Technicians set and retrieve three kinds of traps every weekday, hiding them beneath manhole covers, in roadway medians and in yards (with homeowners’ permission, of course). The county is divided into 268 sectors and from May to October, researchers collect mosquitoes from each sector at least every other week.

Entomologist Christy Roberts makes her rounds in a white, county-issued pickup truck. At each stop she sets out orange traffic cones before retrieving traps that have typically been outside for about 12 hours.

One type, called a gravid trap, sits on top of a plastic tub of water. The stagnant, smelly water lures female mosquitoes. Alongside a house in one yard, Roberts pulls the tub out from underneath some bushes. She peers inside the trap’s cylindrical net, spotting individual insects in the blur of flickering wings.

“Lots of females, some of them are blood-fed, and we have males in there, too,” she said. “The female will fly over the water and then land on top of the water to lay their eggs,” Roberts explained. “And as they’re floating on top of the water, the fan will suck them up into the net.” The focus of surveillance is females: They need at least one blood meal in order to reproduce.

Roberts makes a circuit around southwest Harris County. The empty traps go in her truck bed, and she hangs the nets full of trapped mosquitoes inside from the roof of the cab. “We hang the nets so that the mosquitoes will be able to continue to fly,” she said. “And they won’t rub their scales off, which is what we need to identify them. And it also helps keep them alive until we can freeze them.”

At the lab, the mosquitoes are killed by flash freezing, which helps preserve any viruses they might harbor. A technician puts the cold mosquitoes in a box, labels them by location, then sorts them by sex and species.

Roberts sits down at a lab bench and uses green tweezers to pick through the fragile, feathery bodies. To the untrained eye, they just look grey. But Roberts is searching for banding, wing color, and variations in the shape and size of the insect’s proboscis and other organs.

“I am sorting for Culex quinquefasciatus, which is our primary vector for West Nile. And I’m just placing them directly in to the vial,” she said. (As the Latin name indicates, that mosquito has five bands across its abdomen.) 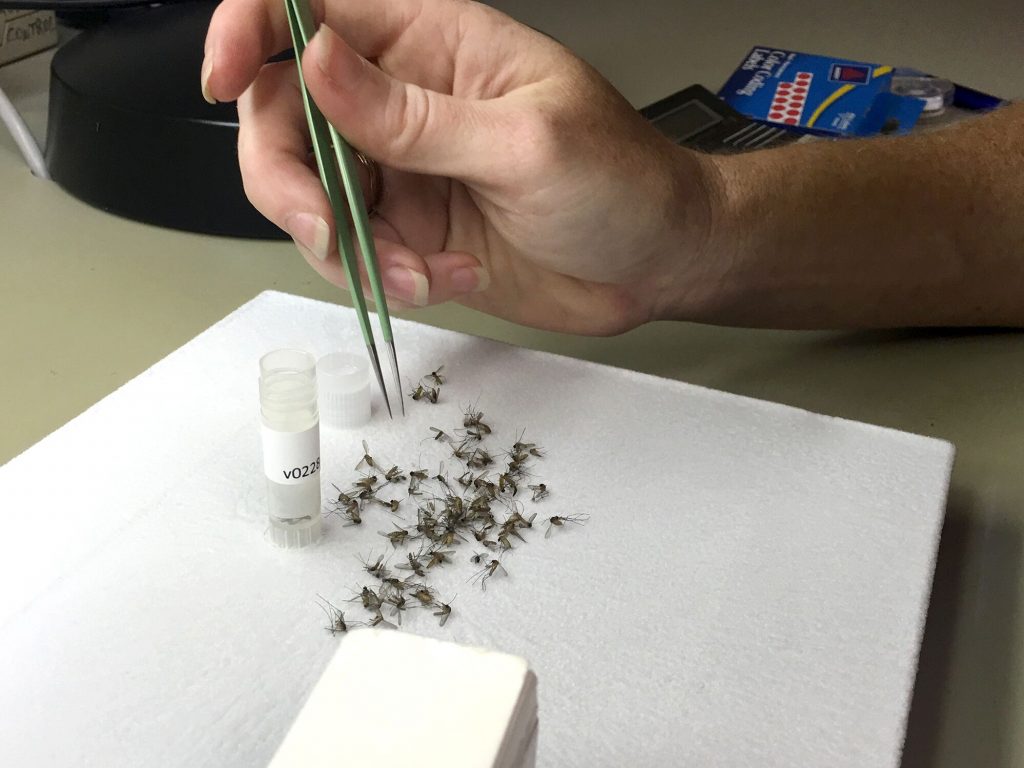 Vials then go to Harris County’s virology unit, where they are tested for West Nile, St. Louis encephalitis, dengue, and chikungunya viruses. For Zika testing, samples are currently sent to the University of Texas Medical Branch in Galveston. But soon, the lab will also be able to test for Zika on-site. The expansion will cost $300,000.

Harris County is home to 56 different species of mosquitoes, says Dr. Mustapha Debboun, director of mosquito control. But only three species are relevant, because they carry viruses harmful to humans.

“We have the Aedes aegypti, which is the yellow fever mosquito. And also the Aedes albopictus, also known as the Asian tiger mosquito, and the Culex mosquito,” Debboun explained. “These are the three that we are after. And thank God, we’re only dealing with three.”

Debbun says they mostly find West Nile — 1,286 cases in 2014, 406 in 2015, none so far this year. He says in the past five years, they’ve had four positive tests for St. Louis encephalitis (also carried by Culex), and none for dengue or chikungunya. Zika — as well as dengue and chikungunya — is transmitted by the Aedes mosquitoes and has not been found in Harris County mosquitoes.

In many municipalities, mosquito control simply means spraying chemicals, Debboun says. But in Harris County, spraying is done strategically. “We go hit the area where we know the mosquitoes have the disease in them,” Debboun explained. “We don’t just go randomly and just spray, and not only waste the pesticide, but also put a pesticide in the environment when you don’t need to.”

Selective spraying also keeps the insects from developing resistance, he says. Occasionally, the county will conduct aerial spraying, but that’s happened only twice recently — after Hurricane Ike in 2008 and during a West Nile outbreak in 2014.

Debboun says his team is prepared for Zika. In 2013, he diversified the traps, purchasing models that are especially attractive to Aedes species, so his employees have had a few years to learn to use those traps. He’s planning to ask the county commissioners for 74 more of the traps, at a cost of $300 each.

Kaiser Health News is an editorially independent program of the Henry J. Kaiser Family Foundation, a nonprofit, nonpartisan health policy research and communication organization not affiliated with Kaiser Permanente. You can view the original report on its website. This story is part of a reporting partnership with NPR, Houston Public Media and Kaiser Health News.