Today’s racial wealth gap is wider than in the 1960s

Wealth inequality in the United States still has a strong racial dimension. That’s according to an analysis from the Urban Institute released Wednesday.

So while the mid-wealth families saw their wealth increase by the highest percentage, the families near the top of the wealth distribution obviously had a lot more to start with. They’re now more better off than middle-wealth families than they were in 1963. In other words, wealth inequality is greater.

You may have read David Leonhardt’s Upshot article in the New York Times Tuesday explaining that “Inequality has actually not risen since the financial crisis.” Leonhardt highlights the research of George Washington University’s Stephen Rose, who’s shown that while income inequality is high by historical standards, it is not higher than it was before the financial crisis began — because of two factors: one, the rich suffered a big hit from the crisis, and two, government transfers have helped maintain the status quo for middle and lower-income Americans.

Income inequality is not the same as wealth inequality; although, as the Urban Institute points out, the former is an important contributor to the latter. Income is what you make; wealth is what families fall back on when the going gets tough. According to Urban’s calculations (using Current Population Survey data), average income for all three wealth distributions declined starting in 2006. While average incomes among the top 90th percentile took a hit during the financial crisis, they still far exceeded incomes in the bottom 10th percentile and 50th percentile, and the gap in 2013 outstretched the gap in 1963. 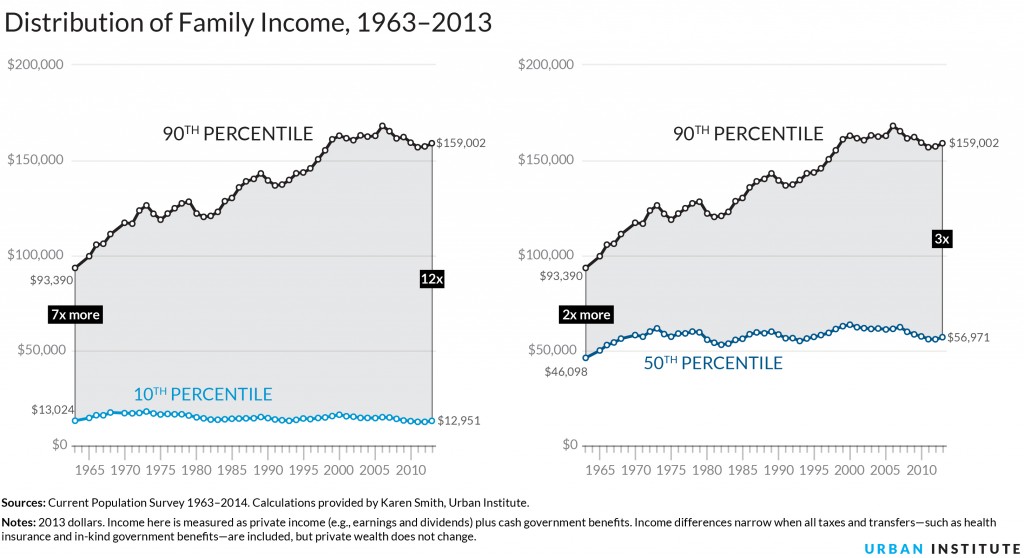 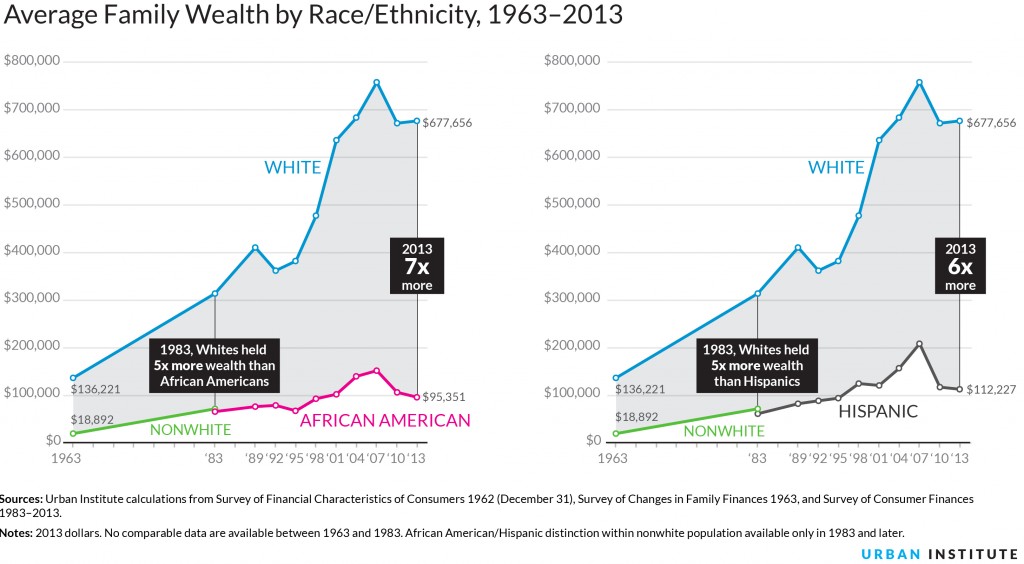 As the Urban Institute points out, the wealth gap between races increases with age. That makes sense if you consider that most of us make more as we get older and advance in our careers. But if white Americans start out making more at better paying jobs than blacks and Hispanics, they’re going to end up with a lot more when they near retirement age. 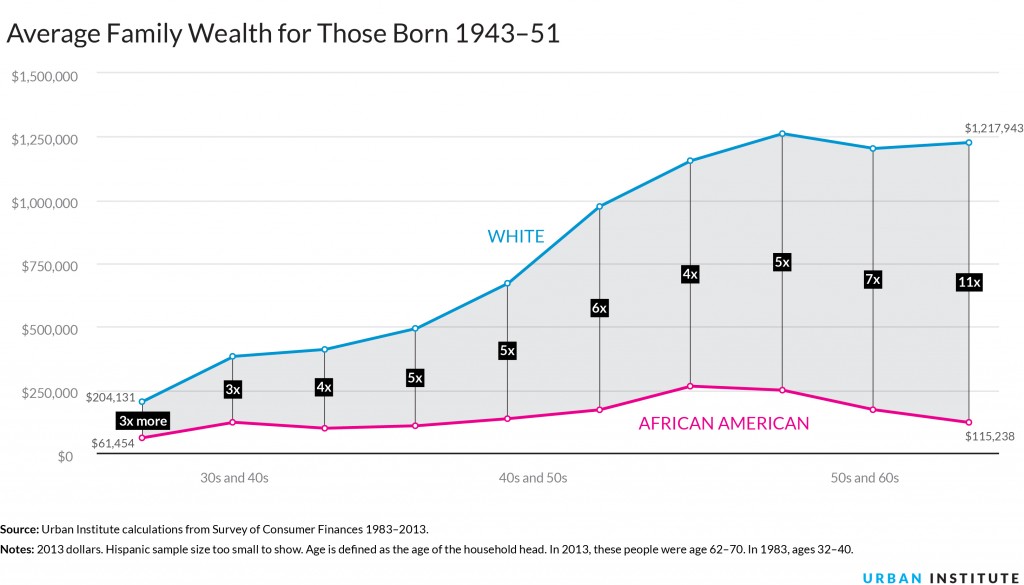 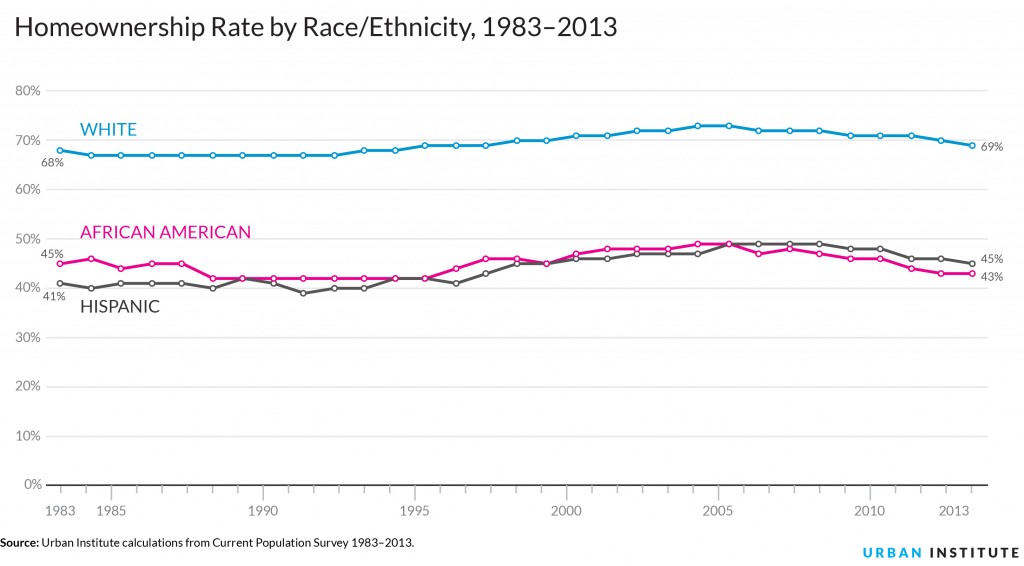 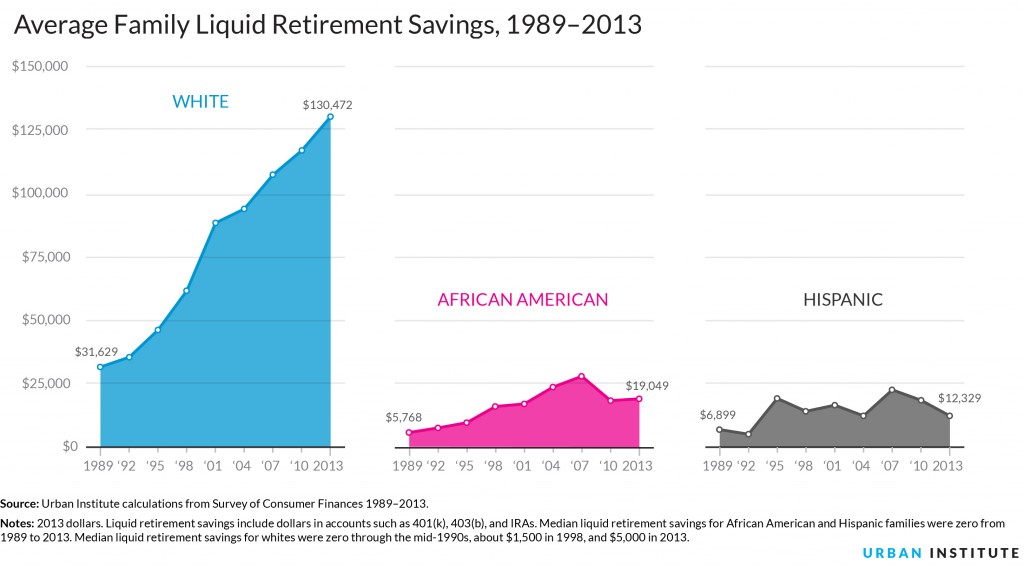 Another reason why African-Americans have less wealth than whites is student loan debt. Since the mid-2000s, they’ve had more of it. The fact that 42 percent of African-American Americans between the ages of 25 and 55 had student loan debt in 2013 (compared to 28 percent of whites) reflects a vicious cycle: families’ lower wealth compels students to take on debt, but that debt then hurts their overall wealth well into adulthood. 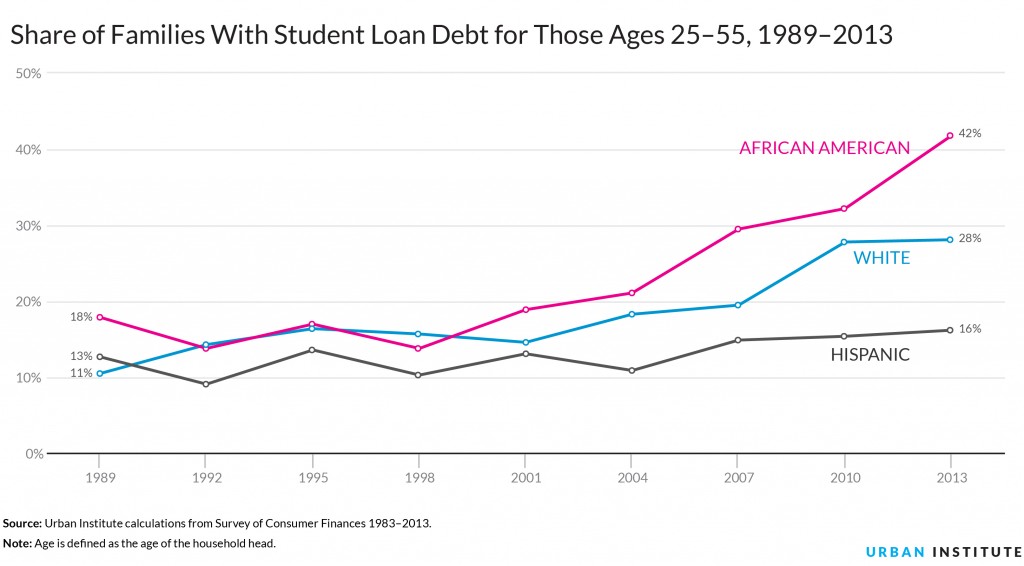 While Professor Rose’s research about income inequality not actually having grown since the crisis tells an important tale about government transfers — namely that they work — the Urban Institute analysis suggests that government efforts to promote asset-building by low-income families do not. According to the Urban Institute, many subsidies disproportionately benefit the middle or upper classes, while some of it what it calls “safety-net programs” may even discourage the poor from saving if, for example, having assets disqualifies them from receiving benefits. 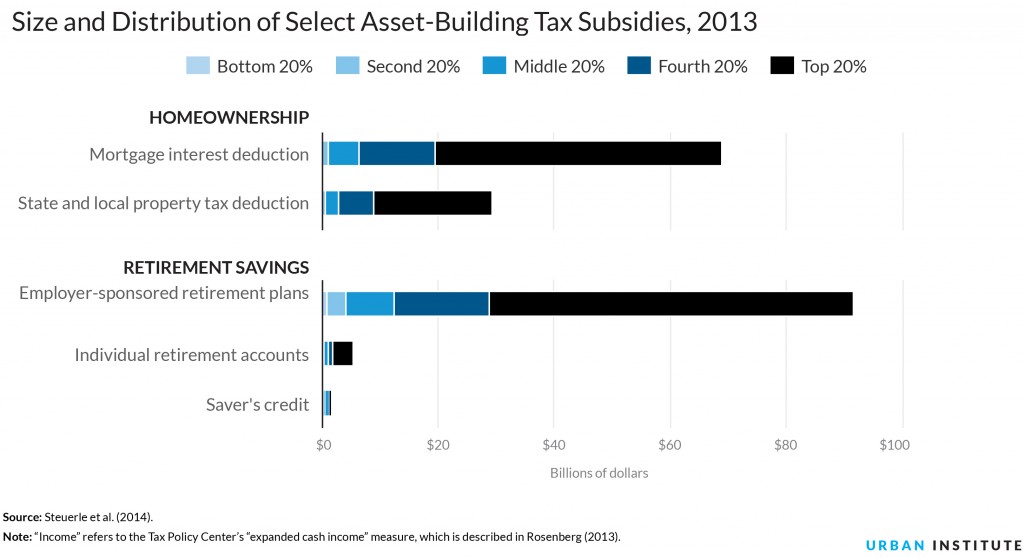 Left: In 2013, the average white family had seven times the wealth of average African American families and six times the wealth of Hispanic families, according to an Urban Institute analysis released Wednesday. Photo by Brand New Images via Getty Images.