GREENVILLE, Calif. — A wildfire raging in Northern California exploded in size overnight, becoming the third-largest wildfire in state history amid high temperatures and strong winds. Better weather conditions were expected to aid the firefight on Friday.

The Dixie Fire grew by 110 square miles (285 square kilometers) between Thursday night and Friday morning, making the blaze the largest wildfire currently raging in the nation.

“This is going to be a long firefight,” said Capt. Mitch Matlow, spokesperson of the California Department of Forestry and Fire Protection.

The fire was 35% contained Friday morning but was largely expanding within the perimeter firefighters previously established. It now spans an area of 676 square miles (1,751 square kilometers.

On Wednesday, the fire tore through the little California mountain town of Greenville, which resident Eva Gorman said was a place of community and strong character, where neighbors volunteered to move furniture, colorful baskets of flowers brightened Main Street, and writers, musicians, mechanics and chicken farmers mingled. 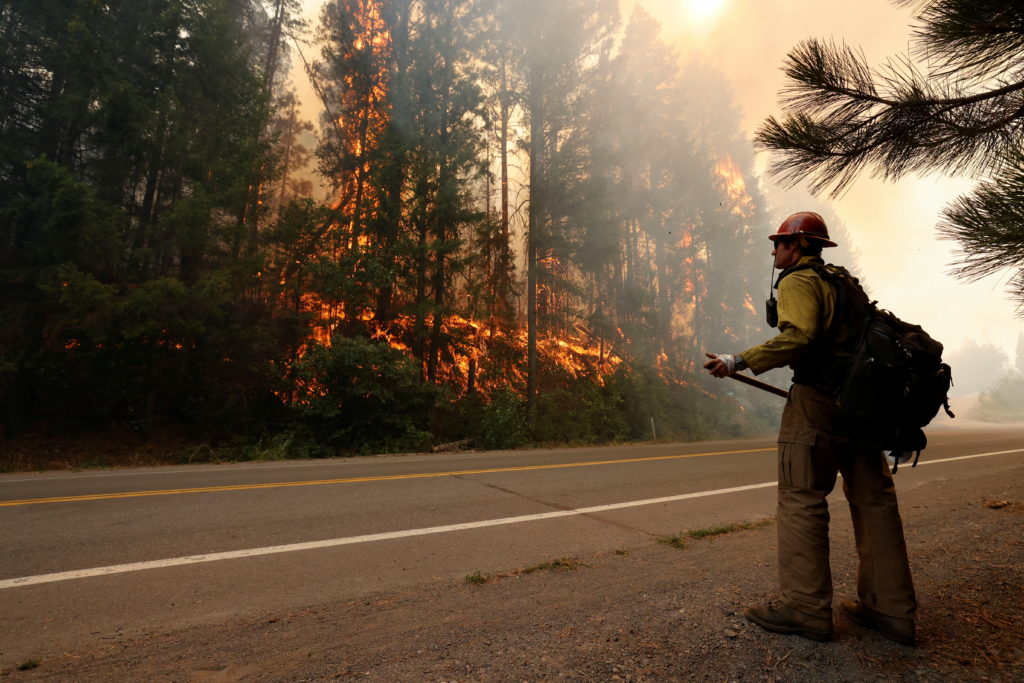 Firefighter David Molter monitors the progress of flames that were burning along a roadway at the Dixie Fire, a wildfire near the town of Greenville, California. Photo by Fred Greaves/Reuters

As hot, bone-dry, gusty weather hit California, the fire raged through the Gold Rush-era Sierra Nevada community of about 1,000, incinerating much of the downtown that included wooden buildings more than a century old.

The winds were expected to calm and change direction heading into the weekend but that good news came too late for Gorman.

“It’s just completely devastating. We’ve lost our home, my business, our whole downtown area is gone,” said Gorman, who heeded evacuation warnings and left town with her husband a week and-a-half ago as the Dixie Fire approached.

She managed to grab some photos off the wall, her favorite jewelry and important documents but couldn’t help but think of the family treasures left behind.

“My grandmother’s dining room chairs, my great-aunt’s bed from Italy. There is a photo I keep visualizing in my mind of my son when he was 2. He’s 37 now,” she said. “At first you think, ‘It’s OK, I have the negatives.’ And then you realize, ‘Oh. No. I don’t.’”

Officials had not yet assessed the number of destroyed buildings, but Plumas County Sheriff Todd Johns estimated on Thursday that “well over” 100 homes had burned in and near the town.

“My heart is crushed by what has occurred there,” said Johns, a lifelong Greenville resident. 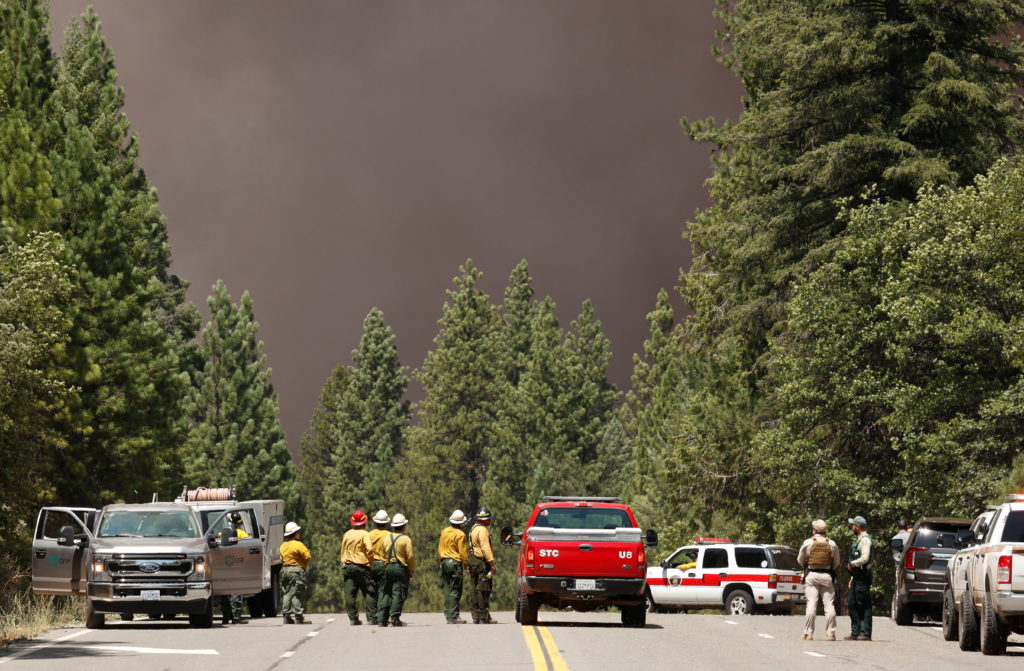 Firefighters and police officers watch dark smoke from wind-driven fires that closed Highway 89 temporarily at the Dixie Fire, a wildfire near the town of Greenville, California. Photo by Fred Greaves/Reuters

About a two-hour drive south, officials said some 100 homes and other buildings burned in the fast-moving River Fire that broke out Wednesday near Colfax, a town of about 2,000. There was no containment and about 6,000 people were ordered to evacuate in Placer and Nevada counties, state fire officials said.

The three-week-old Dixie Fire was one of 100 active, large fires burning in 14 states, most in the West where historic drought has left lands parched and ripe for ignition.

The Dixie Fire had consumed about 432,813 acres, according to an estimate released Friday morning. That’s 676 square miles (1,751 square kilometers) — moving the blaze from the state’s sixth-largest wildfire ever to its third-largest overnight.

The fire’s cause was under investigation, but Pacific Gas & Electric has said it may have been sparked when a tree fell on one of the utility’s power lines. No injuries or deaths have been reported.

The blaze exploded on Wednesday and Thursday through timber, grass and brush so dry that one fire official described it as “basically near combustion.” Dozens of homes had already burned before the flames made new runs.

No deaths or injuries were reported but the fire continued to threaten more than 10,000 homes.

“It’s wreaking havoc. The winds are kind of changing direction on us every few hours,” said Capt. Sergio Arellano, a fire spokesman.

Heat waves and historic drought tied to climate change have made wildfires harder to fight in the American West. Scientists say climate change has made the region much warmer and drier in the past 30 years and will continue to make weather more extreme and wildfires more frequent and destructive.

The blaze hit Greenville from two angles and firefighters already were in the town trying to save it but first they had to risk their lives to save people who had refused to evacuate by loading people into cars to get them out, fire officials said.

“We have firefighters that are getting guns pulled out on them, because people don’t want to evacuate,” said Jake Cagle, an incident management operations section chief.

The flames also reached the town of Chester, northwest of Greenville, but crews managed to protect homes and businesses there, with only minor damage to one or two structures, officials said.

The fire was not far from the town of Paradise, which was largely destroyed in a 2018 wildfire sparked by PG&E equipment that killed 85 people, making it the nation’s deadliest in at least a century.

California’s blazes are not the only wildfires scorching vast areas in the world. Thousands of people fled wildfires burning out of control in Greece and Turkey on Friday, including a major blaze just north of the Greek capital of Athens that left one person dead, as a protracted heat wave turned forests into tinderboxes and flames threatened populated areas, electricity installations and historic sites.

Left: A house is fully engulfed by flames at the Dixie Fire, a wildfire near the town of Greenville, California. Photo by Fred Greaves/Reuters