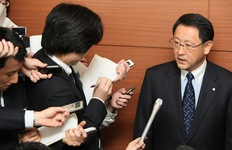 Today on Capitol Hill, Akio Toyoda — president and CEO of Toyota Motor Corp. — will face questions from the House Committee on Oversight and Government Reform as it probes his company’s response to its vehicles’ safety concerns. According to a prepared statement, Toyoda, 53, will again apologize to consumers and commit to restoring their trust.

“Under my leadership I’d like to reaffirm our values of placing safety and quality the highest on our list of priorities, which we have held to firmly since the time we were founded,” Toyoda will say, according to his prepared statement.

The circumstances are hardly storybook for a man known to the Japanese as “the prince.”

In 1937, his grandfather, Kiicherio Toyoda, began what is now the largest auto company in the world. As Kiicherio’s only grandson, Akio Toyoda seemed destined to follow in his grandfather’s footsteps as president of Toyota. And after brief resistance to joining the company following grad school, he formally began in 1984 at the company’s Motomachi Plant in Toyota City, Japan.

Over the past quarter century, Toyoda rose in status at the company — overseeing production and marketing operations in various capacities. He acted as chief officer of its Asia & China Operations Center, served on its board of directors and was the executive vice president overseeing product management in Japan and overseas. In addition, Toyoda spent two years in California as executive vice president of the company’s joint production operation with General Motors. Each of these positions broadened his experience in auto production on a global level.

In June 2009, the company turned “the prince” into its president. Just prior to Toyoda taking over, Toyota posted its first annual loss since 1950. With the company facing several billion dollars in losses, Toyoda had both the resume and the family name that many hoped would help return the company to profitability.

“No doubt his family ties were important and helped catapult him to the top,” says Paul Eisenstein, publisher of TheDetroitBureau.com and long-time auto journalist. “But he has worked in various areas of automotive production and his love for automobiles and motor sports helped make him a viable candidate.”

Toyoda’s experience in California was seen by many as a helpful bridge for the company to its American market. “His time outside of Japan gave him a worldly view, which is an asset to the company because America is one of its primary markets,” says Eisenstein. But the U.S. market is also where the company has experienced its biggest stumbles, with six million recalls and nearly 34 reports of deaths due to faulty accelerator pedals filed since 2000.

The company has estimated a potential loss of $2 billion as a result of the recalls and damaged consumer trust. And Toyoda’s silence following the recalls in October and January has drawn criticism, suggesting that he is out of touch with the company’s operations.

“Looking from the outside, it appears he hasn’t at all taken the leadership role,” says Eisenstein of the American public’s perception. “Yes, he’s apologized, but he’s seemed reluctant in addressing the issue. That will have to change when the hearings begin.”

We’ll have more on the hearings on the NewsHour Wednesday, including video of Toyoda’s testimony and online analysis from David Shepardson of the Detroit News.

*For the record, Toyota is a NewsHour underwriter.