Construction on the controversial Dakota Access Pipeline has begun again, days after the U.S. Army Corps of Engineers approved a final easement to allow the $3.8 billion pipeline to continue.

A spokesperson for Energy Transfer Partners, the company building the pipeline, said in a statement that construction continued immediately after the Army granted the final easement to complete the project on Tuesday.

It’s the latest development in what has been a months-long battle over the project, which Native American tribes and environmental activists say threatens cultural sites and contaminates nearby water sources. Energy Transfer Partners, the company building the pipeline, has said it’s safer than other methods of moving oil, like by train or truck.

The Cheyenne River Sioux filed a legal challenge to the easement Thursday in federal court in Washington, D.C., according to the Associated Press.

Just sent this photo from a #DAPL source in ND. The photo was taken by a worker on site, uploaded online and then taken down within minutes pic.twitter.com/1iayRB6cnk

Like the Standing Rock Sioux Tribe, which has become the center of the movement against the project, the Cheyenne River Sioux say the crude oil pipeline threatens the Missouri River, the main source of drinking water for both tribes. The tribe wants construction to be halted until previous lawsuits by Sioux nations, stuck in federal courts, can proceed.

In December, then-President Barack Obama halted pipeline construction by calling for an environmental impact statement from the Department of Army, which owns the federal land where the pipeline will be laid.

But after taking office, President Donald Trump signed an executive order to expedite the permit and approval process for projects like the pipeline. At the end of January, the Army said it had been directed to expedite review of the Dakota Access pipeline.

The Dakota Access Pipeline and Keystone XL Pipeline were put on hold during the Obama administration. But new executive orders by President Trump begin putting them back on track, as part of efforts to undo former President Obama’s legacy. How do these moves fit into the broader Trump agenda for energy and the environment? William Brangham talks with Valerie Volcovici of Reuters.

Along with Tuesday’s easement approval, the Army announced it was “terminating the Environmental Impact Statement that was in progress.”

That day, Tribal Chairman David Archambault was on his way to Washington, D.C. to meet with Mr. Trump and share the Standing Rock Sioux’s concerns. The tribe strongly opposes drilling underneath Sioux water supply.

Archambault learned the Army had approved the easement when he landed. He cancelled his meeting with Trump upon hearing the news, according to a statement on the tribe’s website.

“This administration has expressed utter and complete disregard for not only our treaty and water rights, but the environment as a whole,” Archambault said. 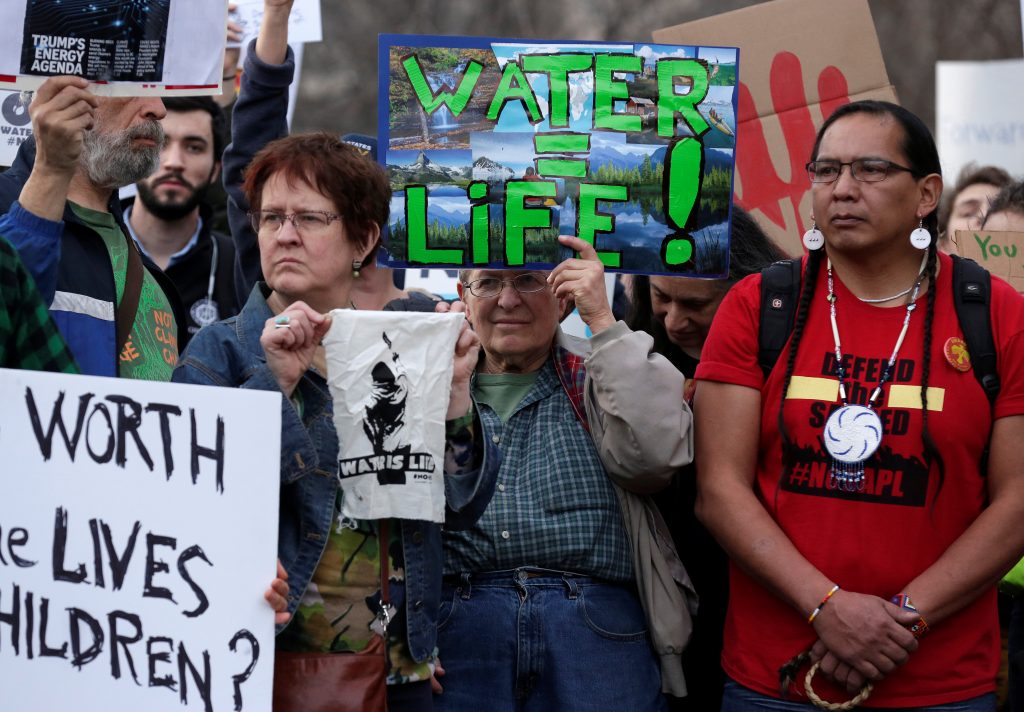 People protest against President Donald Trump’s directive to permit the Dakota Access Pipeline during a demonstration Feb. 8 at the White House in Washington, D.C. Photo by REUTERS/Joshua Roberts.

Col. John Henderson, the Omaha district commander for the U.S. Army Corps of Engineers, said in a statement that “the safety of those located on Corps-managed land remains our top priority, in addition to preventing contaminants from entering the waterway”

ETP expects the drilling underneath the river in North Dakota will take two months. The pipeline could be operational as early as June, according to Reuters.

Meanwhile, Archambault encouraged protesters and allies “ to exercise their First Amendment rights to remind President Trump where we stand on DAPL. Rise with Standing Rock.”

A Native Nations March on Washington is scheduled for March 10.