Trump promises tanks and ‘biggest ever fireworks’ on July 4

WASHINGTON (AP) — President Donald Trump on Tuesday promised military tanks along with “Incredible Flyovers & biggest ever Fireworks!” for the Fourth of July in Washington. But the District of Columbia’s says “Tanks, but no tanks” and complains that Trump is politicizing what traditionally has been a nonpartisan celebration.

White House and administration officials have tried to calm those concerns by stressing that Trump plans to deliver a patriotic speech at the Lincoln Memorial on Thursday during his “Salute to America” event that is billed as honoring the U.S. armed forces.

But one of Trump’s closest White House advisers strayed from that reasoning when asked to preview his remarks.

Senior adviser Kellyanne Conway told reporters Tuesday the speech would cover “how wonderful this country is, our troops and military, our great democracy and great call to patriotism, the success of this administration in opening up so many jobs for individuals, what we’ve done for veterans.”

Trump also criticized Democrats after first saying he thinks he can give a speech for everyone.

“I think I’ve reached most Americans,” Trump said Monday during an Oval Office appearance, adding that most Americans want no crime, a strong military, good education and good health care.

Trump tweeted Tuesday: “Big 4th of July in D.C. ‘Salute to America.’ The Pentagon & our great Military Leaders are thrilled to be doing this & showing to the American people, among other things, the strongest and most advanced Military anywhere in the World. Incredible Flyovers & biggest ever Fireworks!”

Big 4th of July in D.C. “Salute to America.” The Pentagon & our great Military Leaders are thrilled to be doing this & showing to the American people, among other things, the strongest and most advanced Military anywhere in the World. Incredible Flyovers & biggest ever Fireworks!

But not everyone is on board.

The military appreciates national recognition, but some members worry that they will be seen as political props. This concern has been heightened during Trump’s administration by his repeated focus on showcasing the military as the main symbol of U.S. power and influence in the world.

The District of Columbia government previously had complained about damage that tanks would do to city streets and reissued its complaint on Monday after The Washington Post reported on Trump’s plan to station military tanks in the city.

“We have said it before, and we’ll say it again: Tanks, but no tanks,” the City Council tweeted. The tweet included an image of a Defense Department memo from 2018 that suggested only wheeled vehicles be used to minimize damage to streets from 60-ton tanks. 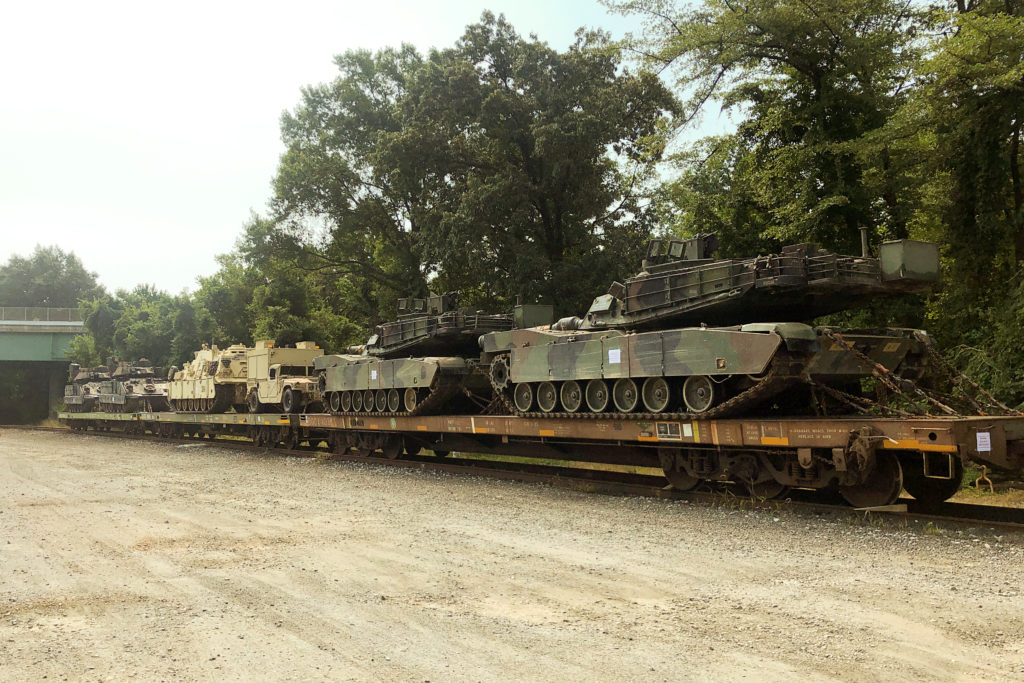 M1 Abrams tanks and other armored vehicles sit atop flat cars in a rail yard after U.S. President Donald Trump said tanks and other military hardware would be part of Fourth of July displays in Washington, on July 2, 2019. Photo by Kevin Fogarty/Reuters

Trump had wanted a military parade of tanks and other equipment in Washington after he watched a military parade on Bastille Day in Paris in 2017. That plan eventually was scuttled, partly because of cost, though Trump apparently held on to the idea. Local officials objected at that time, too.

Thursday’s events are also expected to include military flyovers by the U.S. Navy’s Blue Angels, F-22 fighter jets and possibly other military aircraft.

“It’ll be special and I hope a lot of people come,” Trump said.

WATCH: Trump says tanks will be part of 4th of July in Washington

The annual fireworks display will be held near the Lincoln Memorial instead of its usual location by the Washington Monument.

A ticket-only area in front of the memorial is being set aside for VIPs, including members of Trump’s family, friends and members of the military, the White House said.

Members of Congress, local officials and others have voiced concerns that Trump could alter the tone of what traditionally is a nonpartisan celebration of America’s independence from the British by delivering a political speech. Trump formally announced his bid for re-election in June.

Sen. Tom Udall, D-N.M., said Tuesday that the Interior Department, which oversees the National Mall, has not answered lawmakers’ request for details.

“The American people deserve to know how much of their money the president is spending to turn their July 4th celebration into a de facto campaign rally,” Udall said.

Rep. Don Beyer, D-Va., who represents nearby suburbs in Virginia, called on Trump to personally reimburse U.S. taxpayers and local governments for any damage to roads and bridges. Beyer said he found it “appalling” that Trump would try to make the annual Independence Day celebration about him.